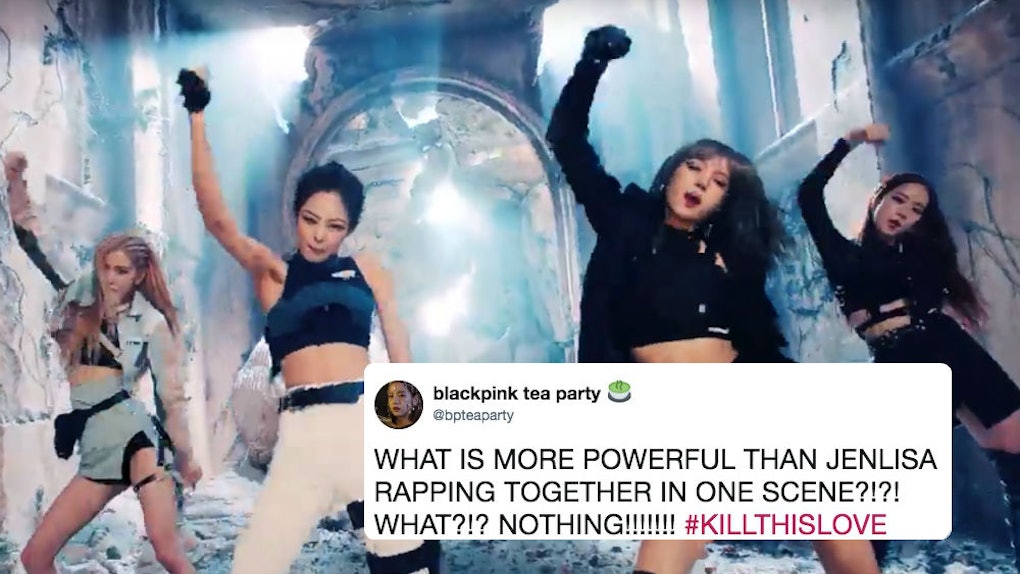 It wasn't too long ago that BLACKPINK was new on the music scene, especially in the United States. But since BLACKPINK released their first album back in December 2018, they've quite literally become one of the most popular groups in the music industry. As you can imagine, fans are loving everything they do. One thing fans are loving right now is their new single "Kill This Love." The single was just released and it's an incredible new power anthem for Blinks to sing along to. And all the tweets about BLACKPINK’s “Kill This Love” music video only highlight that fact.

As previously mentioned, the song is all about needing to end a relationship that's gone sour before it kills the people in it and the lyrics definitely speak to that. Here’s a look at some of the lyrics:

In the video, Jennie, Lisa, Rosé, and Jisoo are flanked by tons of trumpets while they dance around colorful sets — like a grocery store with an eclectic selection of cereal boxes — in a ton of different fierce costumes. It’s definitely a fun video and something that fans are blown away by, unsurprisingly.

If you haven’t seen the video, you can watch it down below:

Given how incredible this video is, it's not surprising that there's quite a lot of talk surrounding it. Fans all over the world are taking to social media right now to share what they think of the song and the video. Everyone seems to love what BLACKPINK is doing, which is great to see. Here's what everyone's saying on Twitter about the video.

Fans were blown away by Jenlisa's joint rap verse, because they looked absolutely fierce delivering it!

And Jisoo's solo had fans completely blown away:

The whole video was just gorgeous. I mean, those visuals!

Also, where is Rosé's Oscar?

Fans are also kind of bowled over by the girls' new sound and the meaning behind the lyrics:

Obviously, the fans are super excited about this video and the song that goes with it. Luckily for them, BLACKPINK has four other songs on their new album that they can enjoy. BLACKPINK actually shared the whole tracklist for Kill This Love on Instagram recently. Here's what's on it:

Basically, Blinks are in for another epic batch of music from their favorite girls. And after hearing "Kill This Love," there's no doubt every song is going to be an ear-worm fans will have on loop for years to come. Well, until the girls drop their next single, that is!

What a time to be alive and a Blink!