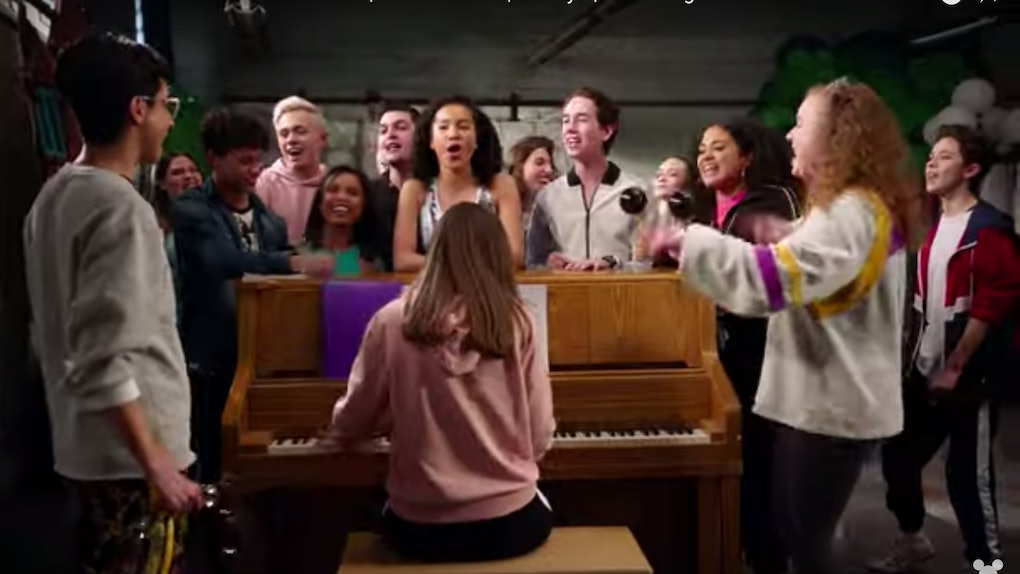 2019 seems to be the year of Disney reboots — Hilary Duff announced that she will be resuming her iconic role as Lizzie McGuire, and now, High School Musical is about to get its own TV series. And if you're ready to get your head in the game after all these years, seriously do yourself a favor and watch the trailer for the High School Musical TV series. I don't know about you, but I think I've finally found what I've been looking for.

Whether you were a Troy, a Gabriella, or a total Sharpay in high school, you probably watched all three of the High School Musical films at one sleepover or another. And if that is — in fact — the case, get ready, because it's making a comeback 11 years after the third and final film, in the form of an all-new TV series. According to E! News, the reboot will be officially called High School Musical: The Musical: The Series. And if you haven't already watched trailer for the show, it was was recently released, and it looks like a hoot and a half.

The trailer for High School Musical: The Musical: The Series shows a totally new, fictitious group of teens at East High School. The school's drama club is putting on a play called High School Musical, which is entirely based on what happened at East High just ten years ago. It "interviews" different students documentary-style, showing what it's really like to put on a play based on their own school. Oh, and get ready for musical numbers, dancing, and, of course, drama — just like the film series, the characters will most likely have to overcome high school stereotypes, gossip, and bullies. So if you haven't already watched it a thousand times, check out the trailer for yourself, below.

It doesn't seem like anyone from the original cast will be appearing in the new series (don't expect to see Zac Efron returning as Troy Bolton, the singing and dancing basketball star), but with all the high school antics and catchy songs, it's bound to be a good time. Oh, and if they don't bring back the OG Wildcat "We're All in This Together" cheer, I'm going to be seriously heartbroken. I truly lived for that dance routine.

Luckily for HSM fans, High School Musical: The Musical: The Series is premiering in just a few short months, on Nov. 12, per E! News. But, here's the catch — it's only going to be available on Disney+. So if you weren't planning on paying for a subscription, you're going to now. Sorry, bank account.

Like I said before, Lizzie McGuire is making a return this year as well. Hilary Duff will be coming back as Lizzie, at 30 years old. She is now living life in Brooklyn as an interior decorator, dating her dream man, and hopefully not still friend-zoning Gordo. If you couldn't tell, I'm so excited.

Dang, Disney is seriously slaying the game. This High School Musical TV series is about to be the soundtrack of my life, fueling all of my lazy Sundays. At this point, I'm seriously considering subscribing to Disney+ — I don't know if I can live without this in my life.

More like this
Disney+'s 'High School Musical' Series Season 2: Release Date, Trailer, Cast, & More
By Ani Bundel
Who Plays Jamie In 'Cruel Summer'? You've Seen Froy Gutierrez Before
By Rachel Varina
The 'Glee' Cast's Tribute To Naya Rivera At The 2021 GLAAD Media Awards Was So Moving
By Abby Monteil
Stay up to date