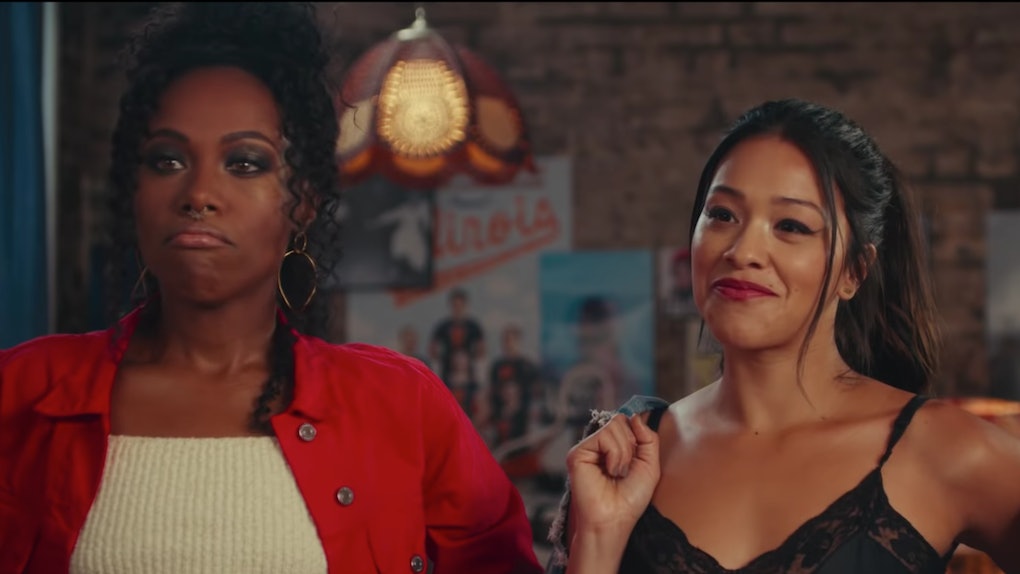 With movies like Set It Up and To All The Boys I've Loved Before, Netflix has become the new go-to place for romantic comedies. Now, with its newest movie Someone Great, Netflix is becoming the home for not-so-romantic comedies as well. The trailer for Netflix's Someone Great shows a romantic love story gone wrong, but a female friendship love story gone totally right. The new movie stars Jane the Virgin's Gina Rodriguez as a music journalist who goes through a rough breakup, but ends up connecting with her best friends and with herself along the way. Here's the description of the flick from Netflix:

Aspiring music journalist Jenny (Gina Rodriguez) has just landed her dream job at an iconic magazine and is about to move to San Francisco. Rather than do long distance, her boyfriend of nine years (Lakeith Stanfield) decides to call it quits. To nurse her broken heart, Jenny gathers up her two best friends Erin (DeWanda Wise) and Blair (Brittany Snow) for one outrageous last adventure in New York City.

So many romantic comedies start similarly: with a breakup, and then with the main character fighting to win back their partner. Someone Great seems like such a refreshing twist on that trope, with the main character reacting to her breakup by leaning on her friends. That's a very relatable set-up for a movie, and one I'm already excited to watch with all of my besties. You can check out the trailer below:

Someone Great is written and directed by Jennifer Kaytin Robinson, who previously created the series Sweet/Vicious on MTV. According to her Twitter, Robinson set out to make the kind of romantic comedy she wished existed. Someone Great came about when she realized wanted to see a movie where the woman chooses herself and her life. It's a really powerful message, and one that fans rarely see in most movies.

In addition to its main cast, the trailer shows RuPaul dispensing some invaluable Beyoncé-themed advice to Rodriguez's Jenny. It feels very right for him to be playing character who supports Jenny in her journey to choosing herself over her ex. After all, RuPaul is the one who uttered those famous words that hit the theme of Someone Great right on the nose: "If you can't love yourself, how in the hell you gonna love somebody else?"

Fans know Rodriguez as the star of CW's Jane The Virgin, a series that showcases her character surviving the wildest of romantic trials and tribulations. With that kind of experience, she was made to play a role like this one. It'll be exciting to see how Rodriguez turns romance tropes on their head.

Someone Great also has top-tier comedy talent behind it at all. It's executive produced by Paul Feig, who produced female-driven comedy powerhouses like Bridesmaids and Ghostbusters. Robinson tweeted that she's especially excited to work with a producer who supports funny women so well.

Mark your calendars for a girls' night on April 19, because that's when Someone Great gets released on Netflix.