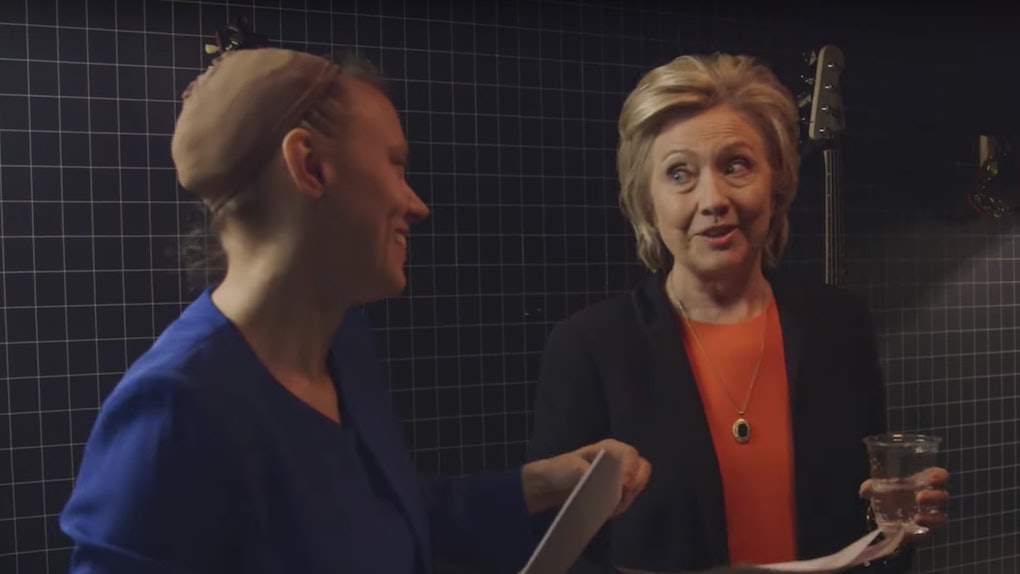 The Trailer For Hillary Clinton's Hulu Documentary Addresses The 2016 Election

Hillary Clinton is ready to recount the most personal and controversial moments of her life, and she is letting anyone with a Hulu subscription in on the tell-all. The streaming service announced a new docuseries called Hillary, and the trailer for Hillary Clinton's Hulu documentary promises to not shy away from some of the politician's most raw moments. Yes, that includes Bill Clinton's affair, as well as what she was personally going through during the 2016 presidential election.

Hillary will be a four-part docuseries premiering in full on Hulu on March 6, 2020. The project promises to give an inside look into Clinton's life unlike any other, complete with never-before-seen footage from her 2016 presidential campaign, as well as exclusive interviews with Hillary, Bill, and Chelsea Clinton.

The trailer for the upcoming limited series doesn't hold anything back. The clip begins with numerous comments from detractors about why they did not vote for Clinton in the 2016 election, bringing up questions of likability and deviousness. It then dips into standout moments from Clinton's life, including her husband Bill saying he once told her, "I really want to marry you, but you shouldn't marry me." The clip also features Clinton recalling how her daughter Chelsea tried to keep her parents together during the mid-'90s, hinting that Bill's affair with Monica Lewinsky will be a major part of the docuseries.

The trailer then skips ahead to more recent events, showing Clinton laughing alongside Kate McKinnon, who impersonated her on Saturday Night Live, as well as footage of her presidential campaign against Donald Trump. The series' chief focus comes up in the end, as the trailer labels Clinton as simultaneously one of the most admired and vilified women in American history. But Clinton herself does not see herself in either extreme, saying: "Somebody asked, 'What do you want on your gravestone?' I said, 'She's neither as good nor as bad as some people say about her.'"

The new series comes from documentarian Nanette Burstein, whose debut documentary On the Ropes earned her an Oscar nomination. In a statement about Hillary, Burstein shared that the docuseries will be about more than just Clinton's life:

Secretary Clinton gave me extraordinary access to her life story, which is utterly compelling. Beyond that, given the particulars of her narrative, we were able to highlight the history of the women’s movement over the last fifty years, and especially what happens to women who aspire to take on roles traditionally inhabited by men.

All four episodes of Hillary will be available to stream on Hulu on March 6, 2020.

More like this
'The Marvels': Release Date, Cast, Trailer, Plot, & More Info
By Ani Bundel
6 Facts About Mckenna Grace From 'The Handmaid's Tale' & 'Hill House'
By Ani Bundel
Will Sharon Carter Be The Villain In 'Captain America 4'? This Theory Makes Sense
By Ani Bundel
Stay up to date