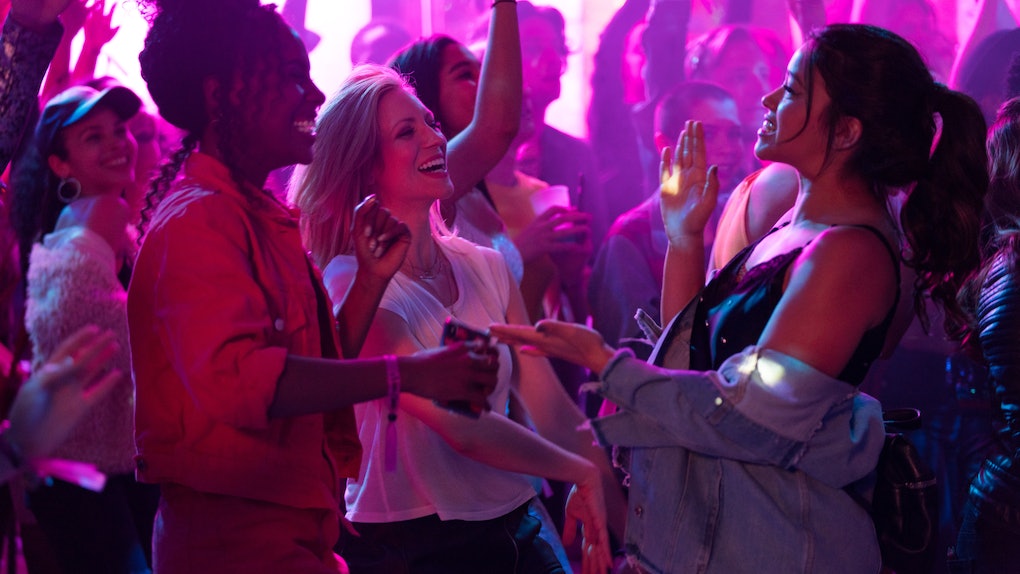 A movie focusing on female friendship and how it pulls you through your low points is already a must-see, but when you add a catchy soundtrack into the equation, you suddenly have the makings of an epic night. Netflix's Someone Great is already enchanting viewers with its hilarious and heartbreaking take on the sudden end of longtime relationships, but the Someone Great soundtrack will also make music fanatics proud. Packed with songs perfectly suited for nights with your girls, the album will have you dancing like there's no tomorrow.

In Someone Great, Jane the Virgin star Gina Rodriguez plays Jenny, a music journalist who receives her dream job at a magazine located across the country. When her longtime boyfriend Nate (Lakeith Stanfield) learns of her plan to move from New York to San Francisco, he freaks about the idea of a long-distance relationship and dumps her. Trying to distract herself from the new heartbreak, Jenny enlists the help of her best friends Blair (Brittany Snow) and Erin (DeWanda Wise) to experience a final New York City adventure.

Jenny being a music journalist is no coincidence, as Someone Great director and screenwriter Jennifer Kaytin Robinson previously worked as one. Robinson also took a very specific approach to crafting the movie's soundtrack, telling Entertainment Weekly, "What’s so fun about being able to put music to picture in that way and use music in that way is it’s like I get to create my own little mixtape and give it to people, and I love doing that. I love creating playlists."

As Jenny and her friends decide to celebrate her departure by attending a music festival, the soundtrack contains an eclectic mix of fast, fun jams and quiet, sadder songs to capture the ups and downs of a night out. Lorde's "Supercut" was one of Robinson's early favorites for the movie, even having written the song into her script. Songs like Lizzo's "Truth Hurts" explain Jenny's mood after her breakup, while The Aces' "Fake Nice" fits with introspective flashbacks exploring Jenny and Nate's relationship.

Even without the context of the movie, playing Someone Great's musical lineup on Spotify is definitely a good time.

Of course, watching the movie before sampling some song choices will add that extra emotional oomph. Playing at a crucial moment in Someone Great, Mitski's "Your Best American Girl" sticks out to Robinson, who told EW that it played during her favorite scene in the movie. Frank Ocean's cover of "Moon River," a cinematic standout best known for its role in Breakfast at Tiffany's, also plays as a tribute to the film's New York setting.

Robinson also looked toward music when it came to naming her script, citing "Someone Great" by LCD Soundsystem as the movie's title inspiration. The song doesn't appear in film, but it's not alone under that distinction. Robinson kept a Spotify playlist of about 500 songs she was interested in featuring, but her Netflix team couldn't secure rights to some of her favorites. After we've worn out the official Someone Great music, can she reveal her own playlist to help us make ideal summer soundtracks?

Someone Great is currently streaming on Netflix.

More like this
The Soundtrack For Netflix's 'The Irregulars' Season 1 Is Such A Vibe
By Ani Bundel
Is Netflix Making A 'To All The Boys' Spinoff Series About Kitty? Here's The Tea
By Rachel Varina
10 Rainy Day Movies To Watch On Netflix That Are Perfect To Pass The Time
By Kristen Perrone and Lexi Williams
Stay up to date