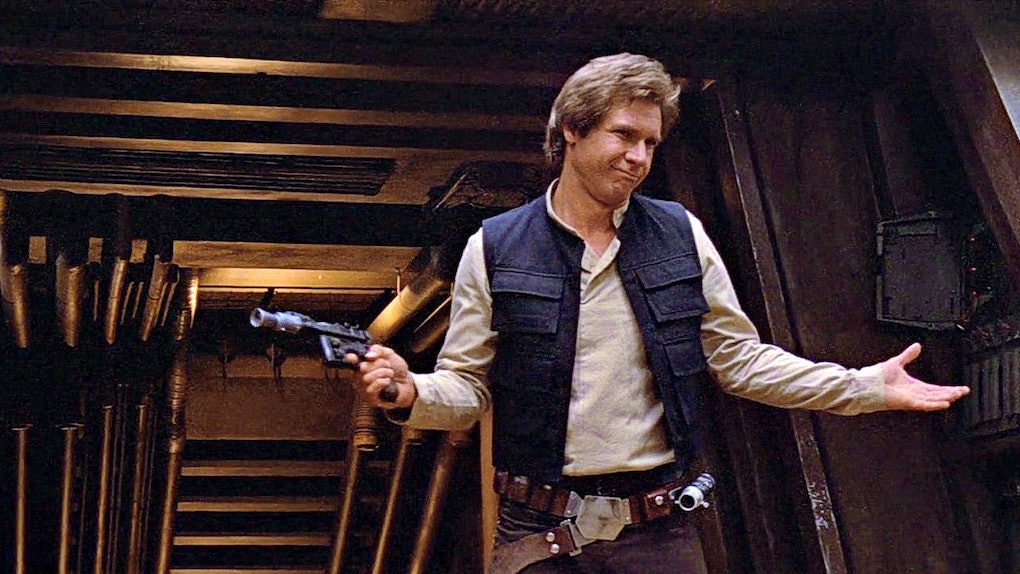 The 'Solo: A Star Wars Story' Trailer Shows That Han Has Been A Rebel From The Start

This year will see the biggest dose of Star Wars since Disney announced it was buying the franchise in 2012. While the films have come out in December so far, our first test to see how they fare back in their original debut slot of Memorial Day weekend will come this year, with the arrival of the Han Solo standalone film. With The Last Jedi only finally leaving theaters, fans have wondered when the promotional push for the new movie will start. What better time and place for the first Solo: A Star Wars Story trailer than the Super Bowl?

Movie ads have become a major part of the Super Bowl commercial landscape, especially those that don't announce their arrival beforehand. The goal is to leave viewers at home puzzling over what they just witnessed, scratching their heads and reaching for their phones to google what they just saw. It worked for The Matrix back in 1999, and since then, there have been many who have tried to recreate it.

While some movie studios, like Lucasfilm, are all about the secrecy, we do know that Solo won't be alone in the trailer category this weekend. Jurassic World: Fallen Kingdom and Mission: Impossible — Fallout are both on the docket for trailers during the game as well. However, there's no way they'll be able to live up to the Solo trailer, which you can watch below.

The trailer is only a minute long, but gives us a glimpse at all of the key characters. We see Donald Glover wearing a truly epic fur coat as Lando Calrissian, Game of Thrones star Emilia Clarke looking intense as new character Qi'Ra, Woody Harrelson as Tobias Beckett, and even a young Chewbacca (well, we only see him from behind, but I have to assume that he's looking a little younger than when we first saw him). And yes, we do see the young Han Solo, played by Alden Ehrenreich, but not until the last moments of the trailer.

The trailer definitely seems to nail the tone you'd want in Solo. There's a certain darkness to it that fits with Han's rebellious nature, and the intense action you'd expect from any Star Wars movie. This should be reassuring, because as fans who have followed the saga of filming this movie are aware, Solo's original directors, Phil Lord and Christopher Miller, were fired almost three quarters of the way through the filming process. They were replaced with veteran Ron Howard. Howard had not directed Star Wars before, but he has directed George Lucas films, including the 1980s classic Willow. But fans were very wary of what this could mean for the production.

Luckily, some fans seem to be pretty excited after seeing the trailer.

Admittedly, there was a lot more love for Glover's Lando and that epic moment than for any other part of the trailer.

I mean, can you blame them?

Earlier this week, all the press ad mystery surrounding Lando seemed to come to a head when Marvel (another of Disney's in-house arms) delivered the trailer to Ant-Man and The Wasp, which comes out a few weeks after Solo does. If the promotional push for one part of the Disney empire was chugging along at a steady pace, what did that say about Solo?

Having the promotional bonanza start at the Super Bowl, and having the trailer kill thanks to Glover, is the best medicine to these rumors, and one that will establish the new pattern of what we can expect from the Star Wars promotional schedule when these movies move permanently back to May releases in 2020.