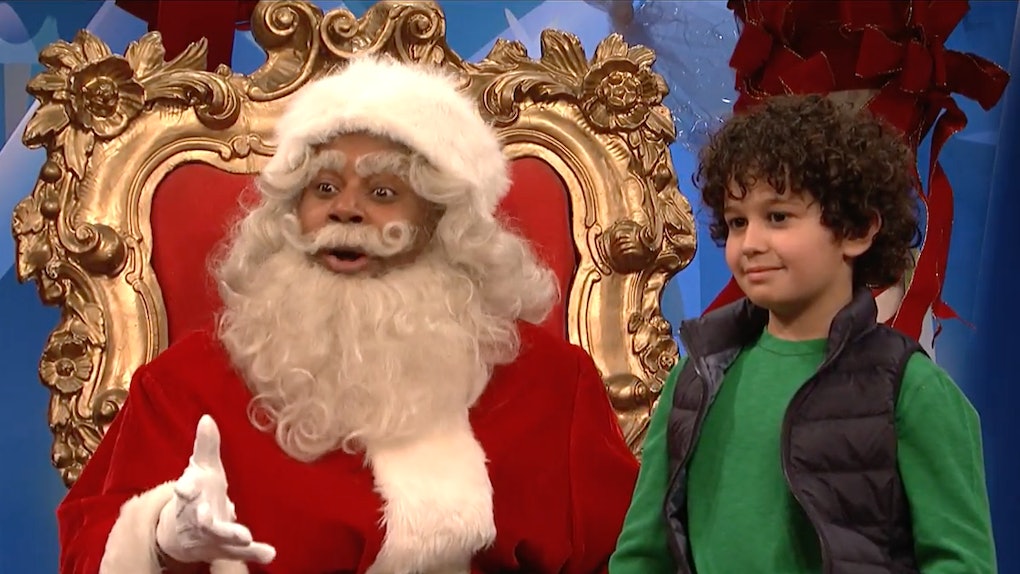 Saint Nick made the mistake of asking a group of children what they had on their Christmas list, and it seemed they were all in search of the same thing: answers. Most youngsters have a toy or two in mind, but these curious little ones wanted to know if Roy Moore would be on the naughty list and why exactly NFL players take a knee during the National Anthem. The SNL mall Santa sketch proved that the big guy certainly had his hands full this year.

Santa (Kennan Thompson) definitely had to be on his A-game with these little ones. Though his first visitor, a little boy named Tyler in a cute, green reindeer sweater, asked for a dinosaur and laser tag, his third request threw the man in the red suit for quite a loop. "Can you tell me: What did Al Franken do?" So, where exactly does Santa go from there?

Rushing to take the next child on line certainly didn't make matters any easier for Santa. Jessica "wanted to follow up on Tyler's question" and see where exactly President Donald Trump was placed this year. With the help of Santa's little "sugarplum," an elf named Amy (Kate McKinnon), Santa received some commentary that only made the situation even more uncomfortable. "Nineteen accusers, Google it," Amy responded to little Jessica.

Take a deep breath Santa, there's plenty more where that came from.

Santa might have tried to stay out of political matters, but the kids didn't get that memo. Jessica followed up with the important tidbit she figured out from the news. "I learned that if you admit you did something wrong, you get in trouble. But if you deny it, they let you keep your job," she proudly stated. We're willing to bet jolly 'ol Saint Nick was more than ready for a sip of eggnog during this fiasco.

It turned out that these little ones were savvier than we had imagined — and very much up on the latest happenings in our country. Some asked questions about sexual misconduct, but others wanted to know what was happening with the Take a Knee movement in the NFL, or if "feminazis" deemed it acceptable to play with dolls. We can't forget about the little girl who broke her hearts by stating that her daddy cannot afford presents this holiday because of the tax bill. Hearing these long string of questions and statements certainly made 2017 seem like quite the year.

"Where the hell did they get these kids from," Santa asked, obviously overwhelmed.

It seemed that the final visitor, a sweet little girl named Jenny, would be the breath of fresh air, as she just wanted "things to be OK." Santa's helper Amy, naturally thrilled to hear that statement, bent down and said,

"I know that things seem particularly insane right now, like truly mind-bendingly insane. And we seem to have lost all perspective on what's naughty or nice..."

"But as bad as things might seem, I promise you Jenny, it will be OK. Maybe not today, maybe not tomorrow, maybe not for another three years, 42 days, and 24 minutes, but Jenny, most people in America are good people. And eventually, good people will fix our country."

(In the event this doesn't happen, this little lady plans to invest her savings in Bitcoin)

Let's hope Jenny gets her wish for things to be OK. And Santa: Kudos to you for enduring a long line of inquisitive little kids.