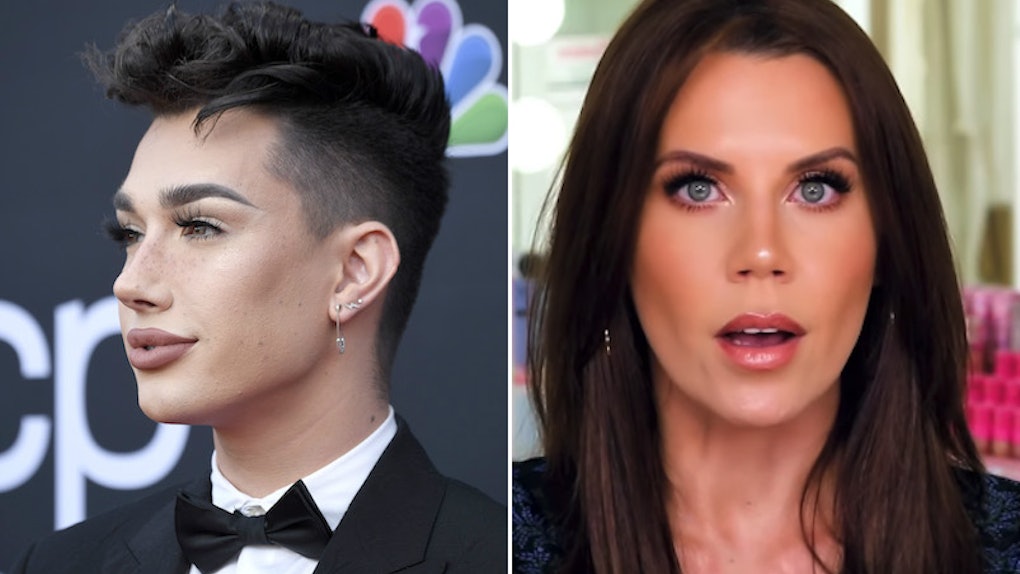 Sisters, things do not look good. OG YouTube makeup artist Tati Westbrook and her pseudo-makeup son James Charles are officially on the outs and it has the cosmetics industry shook. Westbrook has been Charles' mentor, supporter, and mother-figure in the unruly and wild waters of YouTube and makeup fame since the beginning of his explosive career. However, she has officially broken up with the 19-year-old star in a video titled "Bye Sister" for different reasons, including a rumored sponsorship with a competitor brand and her claims that he's behaved inappropriately by trying to "manipulate someone's sexuality" on more than one occasion. Elite Daily reached out to Charles' team for comment on Westbrook's claims, but did not hear back by the time of publication. Now, following Westbrook's video, Charles' close collaborators The Dolan Twins, two members of what's been dubbed among fans as the the Sister Squad, appear to have unfollowed James Charles along with multiple other heavy-hitter celebrities and endorsers.

According to Westbrook, the final straw for her and Charles' relationship came when he released a short video on his Instagram stories endorsing the vitamin brand Sugar Bear. This reportedly came as a huge shock to Westbrook, who has her own vitamin line called Halo Beauty. While you can hear all about the intricacies of Charles and Westbrook's past long, deep, and loving relationship over the course of her 43-minute video (which included her flying him out to do her makeup on her wedding day), you can also just take my word for it that these two were close. So, it's understandable why his decision to promote a direct competitor of Westbrook's strung for the OG beauty guru.

Charles responded by posting a message to his Instagram stories started with, "I want to publicly apologize to my close friend Tati." He went on to explain Sugar Bear allegedly offered him security when an unruly crowd got out of hand at Coachella, which is what prompted him to push their products. He claims he did not receive any money.

Westbrook felt the apology fell flat, pointing out that Charles' decision to not mention her vitamin brand (Halo) by name suggested that Charles had, in fact, signed a contract that forbade him to do so.

While this piece of the drama-puzzle definitely upset Westbrook, she went on to explain she is also tired of apologizing for his behavior and actions. One thing she claimed is that she has seen and heard Charles try to manipulate straight men into believing they are gay multiple times.

She explained, "Everything is over-sexualized and that's the huge underlay to this all that I have finally had enough," she said. "The last phone conversation that James Charles and I had, he said some things telling me about a situation that happened in Seattle at my birthday and it literally made me want to vomit."

She continued, speaking directly to Charles through her video:

You tried to trick a straight man into thinking he's gay, yet again, and somehow, you're the victim. It's really disgusting to manipulate someone's sexuality especially when they are still emerging into adulthood and don't quite have everything figured out. You are using your fame, your power, your money to play with people's emotions. You're threatening to ruin them. You're threatening to embarrass them. And you're doing that to have them behave sexually in your favor even though they're straight, and that's not OK. That behavior is not OK.

James responded with an 8-minute video titled "Tati." He opened by publicly apologizing to Tati and her husband James. He also corroborated that he and the Westbrooks were thick as thieves and that they played a fundamental role in building his career and success.

"I'm so disappointed in myself that I ruined a relationship that did mean so much to me, even if I didn't do the best job of showing it all the time." He added, "What sucks the most is I know there is nothing I can say or do to ever earn that friendship or trust back, but I don't blame them for it."

In regards to the boy situation: Boys have been a topic that I've talked a lot about on my social media journey and it's a topic that I wish I hadn't. I've been involved with a lot of unique and strange situations that have left people confused or upset, and I've learned the hard way about ways that I can interact with boys that I'm interested in and also ones that I should or shouldn't be talking to.

He added, "Tati really was one of the people to sit me down and tell me how it looked from the outside and let me know, 'Hey. Talking to these boys might get you in trouble one day.' And she was right."

Westbrook has yet to respond to Charles' apology video at the time of publication and the Sister Squad has yet to address the situation publicly.