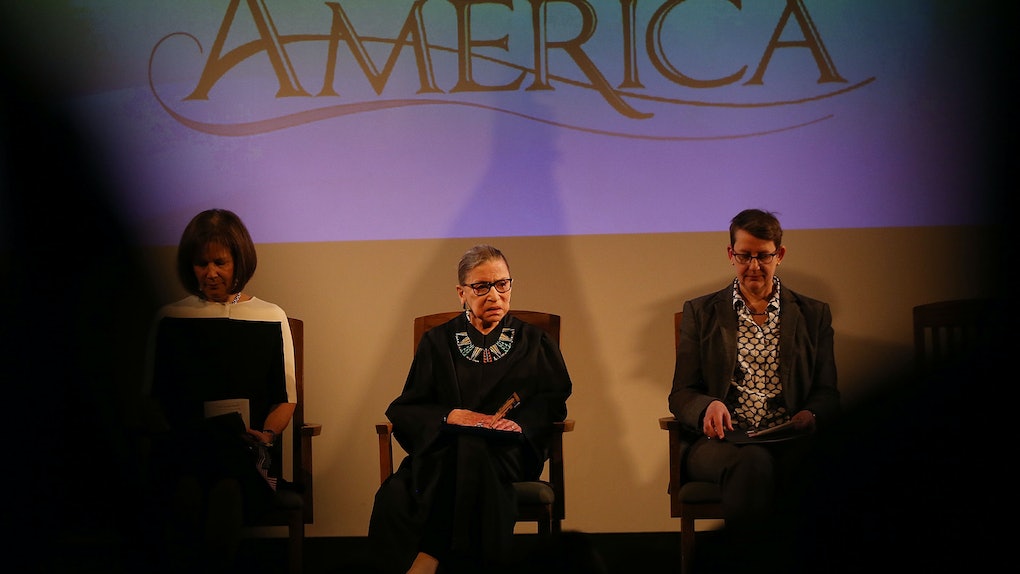 This summer has been a big one for factual films and movies based on historical events. The biggest documentary of the year has been Won't You Be My Neighbor, a study of the life of Fred Rogers, which has pulled in $21 million and counting at the box office on sheer word of mouth. Not far behind it is RBG, a documentary about one of the most famous Supreme Court justices, Ruth Bader Ginsberg. The film is leaving theaters in the next couple week with $13 million. But don't worry if you missed it, the Ruth Bader Ginsberg documentary won't be gone for long. CNN has picked up first-run rights to the film and will be airing it over Labor Day weekend.

The film, which was released via Magnolia Pictures, debuted back at the beginning of May, opening in just 34 theaters. It never made a full wide-release — the highest number of theaters it was in at once was only 432. But it only makes the $13 million box office total that much more impressive.

At the age of 85, U.S. Supreme Court Justice Ruth Bader Ginsburg has developed a lengthy legal legacy while becoming an unexpected pop culture icon. But the unique personal journey of her rise to the nation's highest court has been largely unknown, even to some of her biggest fans – until now. RBG explores Ginsburg's life and career.

CNN was a co-producer on the documentary, ensuring it had the first crack at the film once it finally left theaters. This week, it announced it would be airing the movie on Monday, Sept. 3, 2018.

The film, from directors Betsy West and Julie Cohen, will have its small-screen premiere on Labor Day (September 3), the news network announced Monday. CNN — which co-produced RBG via its CNN Films— plans to air the movie twice that Monday (at 9 p.m. and midnight ET), with an encore slated for September 9 at 8 p.m. ET. It’ll also be available for streaming via cable/satellite on demand and CNNgo platforms.

The film was a hit among critics, who admitted it was preaching to the choir of Ginsberg's fans, but it was a compelling piece of hagiography nonetheless. The movie current boasts a 94 percent certified fresh rating on Rotten Tomatoes, along with a 78 percent rating from audiences.

CNN is going all out in their promotional push for the movie's premiere. According to The Boston Globe:

As part of its promotion for the documentary, which has earned an impressive $14 million at the box office, CNN is launching a companion podcast next week called Beyond Notorious, which will be devoted to Ginsburg’s life, with guests including Ginsburg’s granddaughter, Clara Spera, and the son of the late Justice Antonin Scalia, Eugene Scalia. CNN’s Poppy Harlow and Jeffrey Toobin will host... CNN will be presenting the film with limited commercial interruptions.

More like this
TikTok's #NotTheMainCharacter Trend Shows The Supporting Role You Connect With Most
By Marisa Casciano
Why Wasn't Dr. Strange In 'WandaVision'? Benedict Cumberbatch Was Written Out
By Ani Bundel
'The Marvels': Release Date, Cast, Trailer, Plot, & More Info
By Ani Bundel
Stay up to date