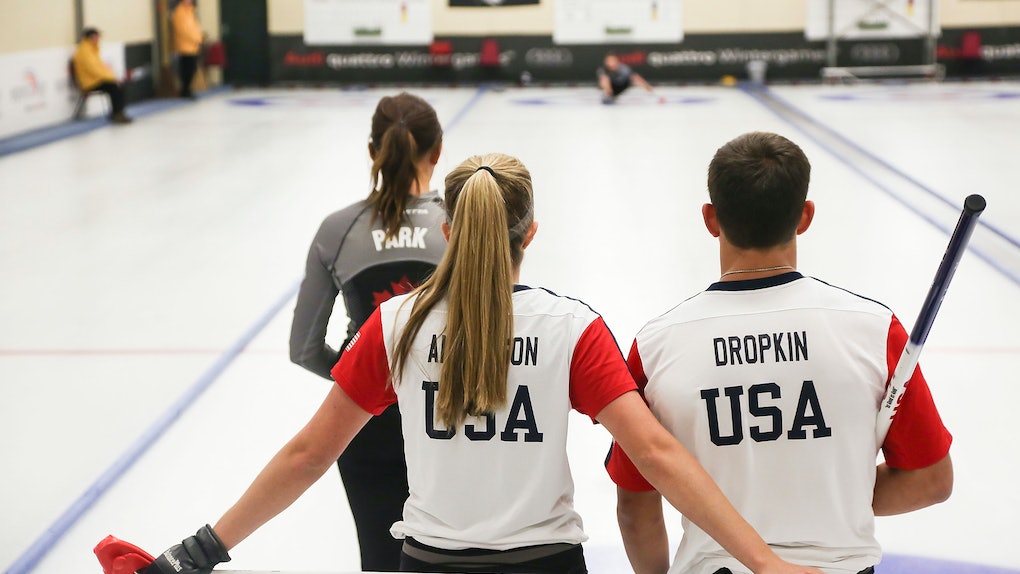 To the non-Olympic athlete's eye, there are countless Winter Olympic sports that seem a little random — and TBH, super confusing. Along with the ski-and-shoot biathlon, as well as the crazy fast-moving luge, many find the rules of curling to be extremely ambiguous. Although it appears to be easy and relatively slow moving, curling actually does have a strict set of rules and guidelines, making it a pretty exciting game. So if you're getting ready to watch the Winter Olympics this year and you want to get a little more informed, here are the rules of curling.

The game takes place on an ice rink that's 150 feet long and 16.5 feet wide, according to the World Curing Federation. The middle of the rink divides each side, and there are identical parallel lines on each half of the court. Spanning sideline to sideline, both halves of the court have a hog line (closest to the middle), a tee line (in the middle of each half of the court), and a back line, which is closest to each back end of the court. Both back ends of the court also have a target-like goal, which is known as the centre hole, or the tee. It has four concentric circles in white, blue, and red.

A curling stone is circular, about 36 inches in circumference, and weighs between 38 and 44 pounds. Each team uses a total of eight stones of the same color (individually marked), and each player delivers two stones per round. Before the game, the order of delivery is determined with a coin toss, and the team captain — called the "skip" — decides on a pre-determined rotation. This allows each player to divisively and strategically curl their stones through others and towards the goal, hence the name of the game. The two teams of four people take turns throwing their stones down court, and in the end, the team with a stone closest to the center of the goal wins. There are 6 to 10 rounds, until one team gets it in the center.

During the game, players throw guards to block shots, draws to help shots travel better, and takeouts to knock out the stones of their opponents. Skips direct their players how and when to brush the ice in front of the tossed stone, which will affect its speed and direction. At the end, more than one stone might be closer to the center and not quite there, but the points still count. A win is super tough to achieve, but also incredibly exciting, and curling teams have some of the best sportsmanship.

Without brooms, the game is kind of similar to a nice, relaxing game of bocce, if you've ever played. But if you're still not catching my drift, definitely check out this video that best simplifies the rules in just two minutes.

Curling is actually a super strategic game, believe it or not. It's not solely based on experience, but also knowledge of the physics involved, based on speed and velocity. It can be a totally captivating game to follow after grasping an understanding of the rules, however, it's often deemed boring because the games are long and somewhat slow-moving. Despite the fact that curling isn't quite as exhilarating as bobsledding, it's definitely still interesting if you understand the gist of the game. There are even curling leagues throughout the United States. So if you're a winter sports fan or if you want to try something new, it's definitely worth looking into for a little extra team camaraderie, as well as a lot of additional fun.