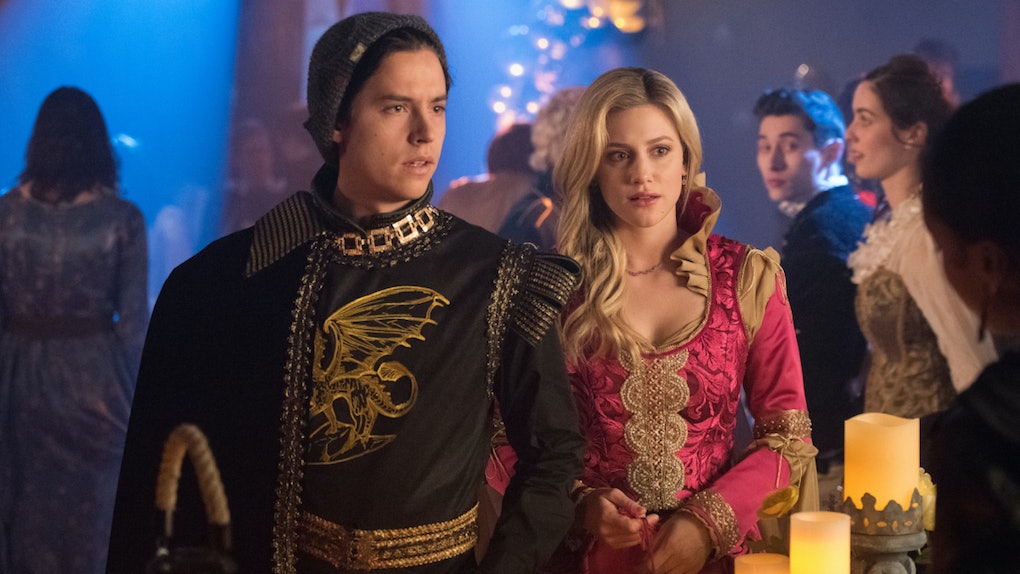 Season 3 of Riverdale has been packed with more weirdness and mysteries than ever before, but between the juvie, speakeasy management, boxing matches, seizures, sketchy board games, weird new drugs, suspicious cult, and masked serial killer of it all, fans have barely gotten to see the show's four stars come together at all. That is going to change in the series finale, though. The Riverdale Season 3 finale synopsis was just released, and it confirms that we will finally see out core four coming together to learn the truth about the Gargoyle King.

Although this season has been full of action and intrigue, one thing that has annoyed some Riverdale fans is that the core four of Archie Andrews, Veronica Lodge, Jughead Jones, and Betty Cooper have largely remained separate from one another rather than working together like they did in seasons past. Season 3 gave each main character their own storyline to focus on, which often excluded assistance from the rest of the group: Archie broke out of prison and got super into boxing, Veronica opened up her own speakeasy but still has to deal with her mafioso dad to keep it running, Betty is still trying to figure out what is going on with the white-clad cult The Farm, and Jughead has been all about solving the Gargoyle King mystery.

The biggest mystery of the whole season is how these disparate storylines could possibly all combine to bring Archie, Veronica, Betty, and Jughead together and find some explanation for it all, but thankfully, that big reunion moment is coming in just a couple of episodes. The CW just released the synopsis for the Riverdale Season 3 finale, which will be called "Apocalypto," and the episode promises to bring the core four together against the Gargoyle King:

THE FINAL QUEST — After receiving mysterious invitations, Archie, Betty, Veronica, and Jughead band together to confront the evils of their past once and for all. Meanwhile, chaos ensues at The Farm after Edgar makes a chilling announcement.

The "mysterious invitations" and reference to the past from the synopsis should remind Riverdale fans of the Midnight Club, which was the group the town's parents formed when they were in high school to secretly play Gryphons and Gargoyles. The summary seems to be teasing that Archie, Betty, Veronica, and Jughead will get the same Gryphons and Gargoyles invitations that their parents did on "Ascension Night" and be forced into one final game that will finally reveal the truth about the Gargoyle King.

The other half of the synopsis teases a major revelation about Edgar Evernever, the only other figure that presents just as big of a mystery as the Gargoyle King. We still do not know exactly what Edgar is up to with The Farm or how he can apparently make his followers interact with their departed loved ones, but this finale should explain all that. As an exciting bonus, the use of the word "chilling" in describing Edgar's announcement will definitely cause fans to think about Riverdale's spinoff series Chilling Adventures of Sabrina. Could Edgar's supposedly supernatural powers have some sort of connection to Sabrina?

Riverdale's Season 3 finale "Apocalypto" will air on Wednesday, May 15.