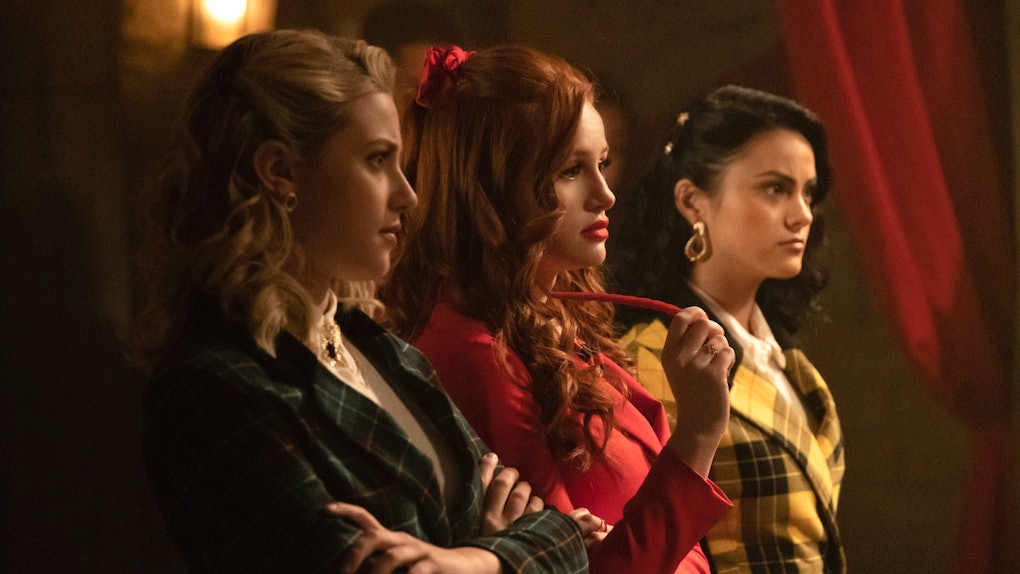 It is finally time for Riverdale to return to the stage for this season's new musical episode. Although everything is going wrong in Riverdale right now, the teens are still going to find a way to sing and dance in their production of Heathers: The Musical next week. But it sounds like there is a devious ulterior motive to this year's school play. The Riverdale Season 3 Episode 16 promo reveals that the new musical will actually take us deeper into the Farm, as another character seemingly joins the cult.

Spoiler alert: This post contains plot details from Riverdale Season 3 Episode 15, "American Dreams." The Farm was not really mentioned at all on this week's new episode of Riverdale, but the promo for next week reveals that the cult will play a major part in Riverdale High's Heathers: The Musical production. We even got to see the very beginning stages of the musical's planning towards the end of the most recent episode. Fresh off her breakup with Toni, Cheryl calls Kevin over and demands that the school musical be Heathers so she can take her mind off of her breakup. Turns out, the Farm is sponsoring the musical, and Kevin, a newly inducted member of the Farm, had already decided on Godspell, but he quickly caves to Cheryl.

The promo trailer gives fans a peek at the musical, and also a bunch of new drama going on around town. Two of the biggest reveals are Hiram telling Veronica that he and Hermione are separating, and a quick shot of Fangs seemingly joining the Farm. Check out the clip below and we can dig into it even more:

Riverdale fans will probably rejoice to hear that Hiram and Hermione Lodge are going to split up in the new episode. The show has been periodically teasing Hermione possibly getting out from under Hiram's thumb for a while now, but frustratingly, she always seems to return to his side in the end. Hopefully, Hiram talking about a separation openly means that the shady parents are really getting a divorce.

The trailer also makes it clear that the Farm will be a big focus of the musical episode, as Betty declares she thinks the Farm is using the musical to indoctrinate students to become new members. We also see Betty sneak into what looks to be a Farm initiation ceremony for Fangs. A quick shot shows Evelyn Evernever watching over Kevin and Fangs, clad in all white, in some sort of chapel.

It seems Betty may be correct, since the Farm is listed as the sponsor for Heathers: The Musical in the casting list that Riverdale showrunner Roberto Aguirre-Sacasa shared when the episode was announced.

Next week's new episode will mark the second time Riverdale has staged its own musical. Last year, the show's characters performed songs from Carrie: The Musical at the height of the Black Hood mystery, and that episode ended in a shocking murder. Could this year's musical also end in a bloody twist? Riverdale's musical episode, "Big Fun," will air on the CW on Wednesday, March 20 at 8 p.m. ET.