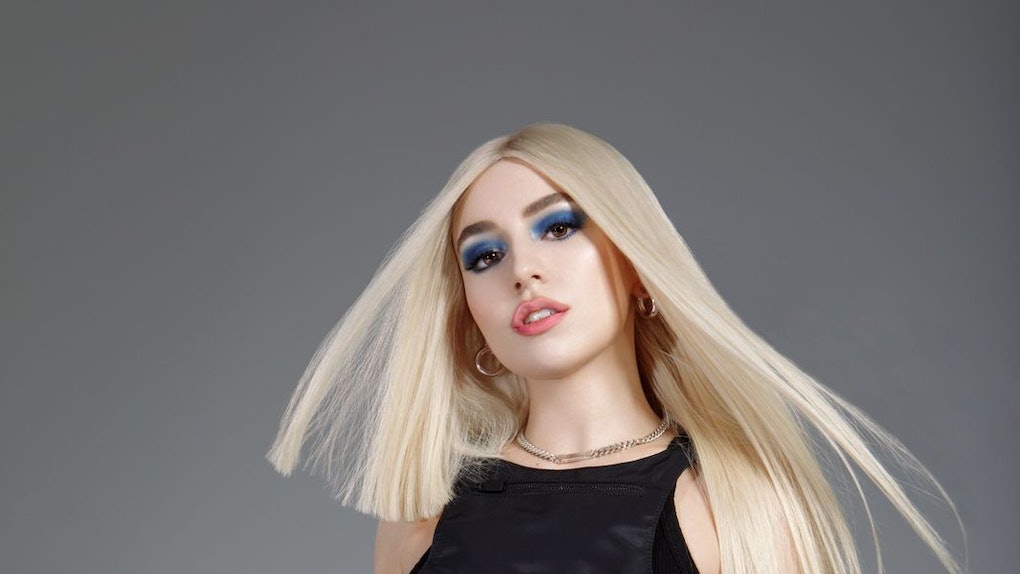 When Ava Max released her song "Sweet But Psycho" in August 2018, it instantly became an inescapable hit. Every Top 40 radio station had it on repeat, and it reached No. 10 on the Billboard Hot 100 chart by May 2019. Her songs "Not Your Barbie Girl" and "Kings & Queens" have seen equal levels of success on TikTok, where fans have filmed over 800,000 videos to the tracks. Amid all of Max's viral music moments over the course of two years, fans have understandably wondered what the hold up was on her full-length record. The reason Ava Max's Heaven & Hell album took so long comes down to one simple truth: All good things take time.

Max is elated her album, which dropped on Sept. 18, is finally here. "It was actually going to come out last year [in 2019], but I was on tour, and I didn't have time to do a photo shoot and get pictures ready," she tells Elite Daily. "I really wanted the pictures to match the songs, and I wanted the whole story to come together."

The album actually went through a series of delays due to circumstances out of Max's control. "I was going to release it earlier this year, but [the coronavirus] pandemic hit. We delayed that release as well just because we didn't know what the future held," she says. "Even now, we don't [know], but I feel like now we know the new normal. At the beginning, it didn't feel right, but I can't hold it off any longer, I just have to put it out, and I'm really excited."

While Max's album title, Heaven & Hell, was always inspired by the peaks and valleys of everyday life, in a year in which the coronavirus pandemic affected so many and saw the music industry grind to a temporary halt, it took on new meaning for Max.

"Heaven and Hell, I feel like we go through every single day," she tells Elite Daily. "There's dualities and emotions and challenges we go through every single day. It's kind of like having an angel and a devil on your shoulder, and I feel like I've been forced to choose all the time with every decision." Max says the album transitions from bright to moody, embodying the album title in a literal sense.

After the massive success of "Sweet But Pyscho," it's natural for fans to wonder if Max feels pressured to produce more mega-hits, but Max is brushing off any expectations that don't align with her values as an artist. "It's all about making a great pop record with meaning behind it," she explains.

Instead of feeling pressured, Max is just embracing the love she's receiving from fans. She's still blown away by the success she's experienced, particularly on TikTok. "It's crazy. 'Not Your Barbie Girl' was the first one to get over [24 million views on YouTube], which was insane to me... then we put the song out because it had only been on YouTube. The fans really wanted that song. Then, it was 'Sweet But Psycho' and then 'Kings & Queens.' TikTok has been a major support in my music for sure."

With Heaven & Hell's release, Max is looking ahead to the next chapter of her career, and she isn't letting anyone dictate where the chapter begins or ends. "It's a long journey, and everyone's path is different. That is the number one thing," she says. "I just wish someone had told me that when I was 18 or 17 years old."

Heaven & Hell is the climax of one incredible chapter of Max's musical journey and, for day-one fans, it was well worth the wait.