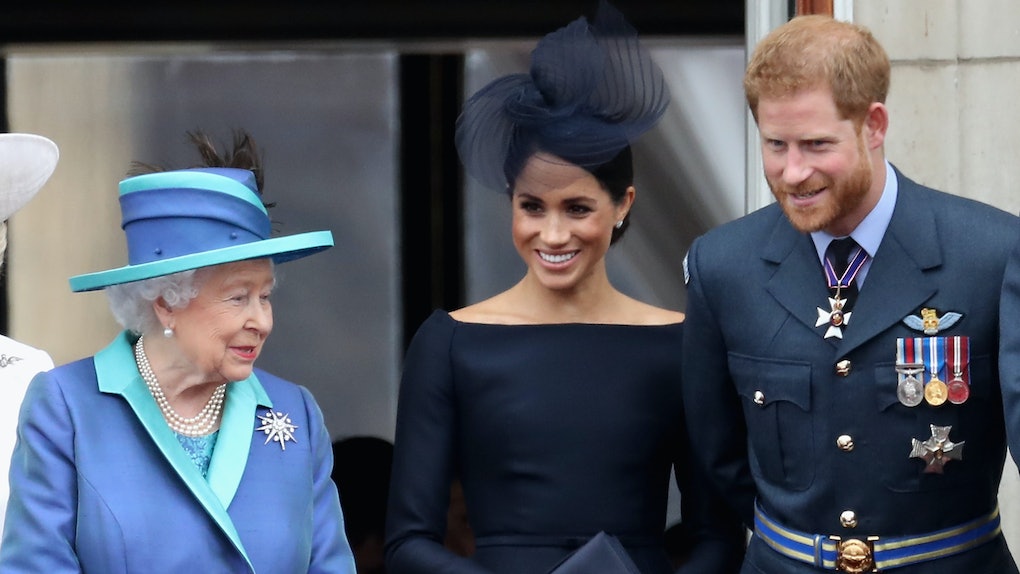 It’s no secret that Meghan Markle enjoys living a healthy lifestyle. Not only is she into yoga, but she also follows a plant-based diet. And apparently, her husband Prince Harry has adopted some of her lifestyle choices as well. Naturally, when two parents-to-be are super into plant-based eating, they might want their child to live as they do as well. And rumor has it that Harry and Meghan really want to raise their child as a vegan. But the rest of the royal family might not be on board. The Queen’s reaction to rumors Meghan and Harry want their baby to be vegan reportedly wasn’t enthusiastic. According to a report from Woman’s Day, the queen is reportedly not happy that her new grandchild might be a vegan. Elite Daily reached out to Kensington Palace for comment on the report, but did not hear back by the time of publication.

A royal insider reportedly told Woman’s Day all about Harry and Meghan’s reported plan to ensure their baby lives a vegan lifestyle. Apparently, the queen just isn’t very supportive of the decision.

"Meghan wants her baby to be raised a vegan," a Palace insider reportedly revealed to Woman’s Day. "The Queen won't have it.”

According to the insider source, Harry and Meghan are reportedly at a loss for how to deal with their future child’s veganism because of Harry’s loyalty to his grandmother.

"It's created tense discussions between Meghan and Harry, who doesn't want to upset his grandmother,” the insider said. “He's hoping Meghan will settle once the baby comes..."

As you probably know by now, the queen is the polar opposite of vegan and is even an experienced hunter. Hunting is one of the royal family’s pastimes and has been for quite some time. So, it’s kind of expected that members of the royal family participate in these family traditions. But according to Woman’s Day’s royal insider, Meghan is keen on living life her own way.

"Meghan keeps pushing the boundaries with the royals and it's not being well received, least of all by HM,” the insider said. "Meghan seems to have little regard for royal traditions but bringing the baby up as a vegan simply won't be tolerated by the monarch."

Who knows if this latest batch of rumors about Meghan and Harry are actually real, but if they are the royal family’s love of hunting and non-vegan lifestyle aren’t the only traditions Meghan isn't going to follow. According to an April 7 report from The Express, some experts are speculating that Meghan may also take issue with the family’s tradition of facing the public just hours after giving birth, the way Kate Middleton has done for all her children.

“At the moment, we understand that she isn’t, she doesn’t want to do that, isn’t going to do that,” Emily Andrews, a royal correspondent for The Sun, said.

Omid Scobie, another royal commentator, thinks Meghan’s feminism has a lot to do with how she’ll handle the birth. “Given what we know about Meghan, the optics of a totally glamorous, picture-perfect moment hours after giving birth are not quite in alignment with her views on the world,” Scobie said.

Obviously, this is all speculation and perhaps these are just more pesky rumors that are totally off-base. But, if it is true, it does suggest that royal experts are seeing a well-defined pattern in Meghan’s behavior that indicates she’s not always willing to bend to royal rules and traditions just because they're the way things have always been. It remains to be seen what will actually happen when Meghan gives birth. Whatever goes down that day, I’m sure Meghan will do what’s in the best interest of her child.