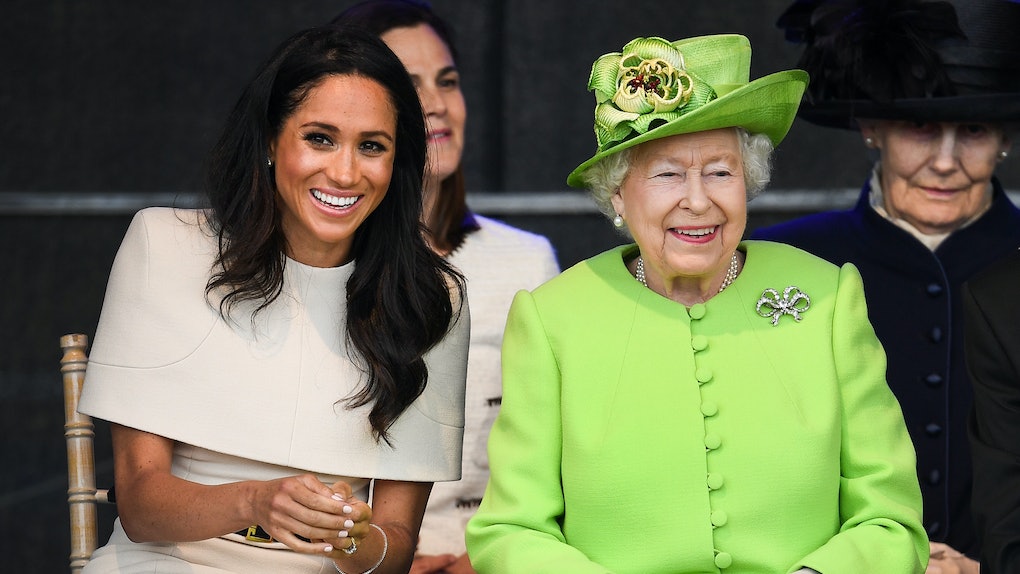 Is there trouble in the royal family? Well, a matter relating to jewels previously worn by Princess Diana may point to a growing tension between Prince William and Prince Harry behind the scenes. And it has everything to do with Meghan Markle. The Sun recently reported that the queen banned Meghan Markle from wearing her jewels. According to sources close to the situation, the queen actually informed Prince William about the possible ban on jewels for Meghan and that’s reportedly causing some tension for Prince Harry. Elite Daily reached out to Kensington Palace for comment on the report, but did not hear back by the time of publication.

In The Sun’s report, an insider source claims that the queen has prohibited Meghan from wearing any jewels from the royal collection — some of which were worn by Princess Diana in the past.

“This is a surprising situation that has been going on behind the scenes over the past few months and has caused tension and upset, especially for Harry,” the source said. “It is at the discretion of the Queen and trusted advisers which items in the Royal Collection she chooses to loan out and to whom.”

So, what’s caused the Queen to change her mind about allowing Meghan to wear the royal jewels? According to The Sun’s royal source, there are a couple of reasons behind the Queen’s decision. The first reason, according to the source, is that the Queen wasn’t thrilled with some of Meghan’s behavior leading up to the royal wedding in May 2018.

“Aspects of Meghan’s behavior, including before the Royal Wedding, caused resentment with forces within Buckingham Palace,” the source said. “To be perfectly honest, the Queen herself was not impressed with some of Meghan’s demands, especially as a new member of the family. As a result, Buckingham Palace has decided that not all items from the Queen’s royal collection will be opened up to Meghan.”

With all that in mind, it seems this decision is a slap on the wrist for what the Queen reportedly perceived to be bad behavior. The other reason the Queen decided to go this route, according to The Sun, is because she wanted to reinforce the hierarchy within the family.

“As part of that situation, the Queen informed Prince William that the items from the Royal Collection worn by Princess Diana would not immediately be made available to Meghan,” The Sun’s source said. “The Queen likes Meghan personally but this is about the hierarchy. She is showing that maintaining the correct order and precedence within the family is important. Even if Meghan is the most popular woman in the world, she is of a lower rank than Kate.”

This is certainly an unfortunate situation all around, if true. Hopefully, any tension that exists behind closed doors will dissipate over time. In the meantime, everyone in the royal family has more important things to think about — like Harry and Meghan’s baby!

More like this
Meghan Markle & Prince Harry's Beef With The British Tabloids, Explained
By Brandy Robidoux
Here's Why Meghan Markle Reportedly Isn't Attending Prince Philip's Funeral
By Cianna Garrison
Prince Philip, The Duke of Edinburgh, Has Died At The Age Of 99
By Noelle Devoe
Stay up to date