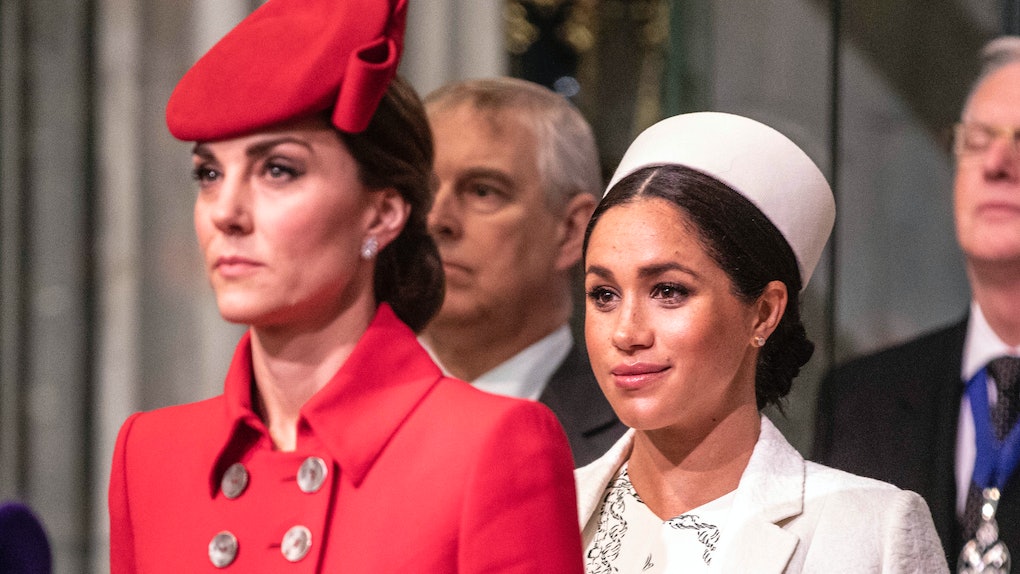 I am seriously tired of analyzing what is going on with Kate Middleton and Meghan Markle. I know that it makes for a better story if we all think the Duchesses of Cambridge and Duchess of Sussex secretly hate each other and are busy throwing side-eye across a long palace table when the Queen isn't looking, but I just don't think that's true. Photos of Meghan Markle and Kate Middleton at Commonwealth Day are totally lovely, friendly, and normal, which has people backtracking on their "resentful sister-in-law" stories they've been weaving.

Elite Daily previously reached out to the palace regarding Kate and Meghan's relationship but did not hear back by the time of publication. However, the palace did release an official statement after a story began circulating suggesting Kate was upset with the way Meghan treated her staff. In that instance, a spokesperson for the palace released a statement saying, "This never happened." So, yeah. That's that.

On March 11, the Duchess of Cambridge and Duchess of Sussex attended a Commonwealth Day service at Westminster Abbey with their husbands and famous royal family relatives. They made it easy for cameras to spot them as Kate wore a bright red coat and hat, and Meghan donned a white pillbox hat with a matching coat and dress. According to reports, Kate and Meghan took time to chat prior to the Commonwealth Day event beginning and cameras even captured them sharing a sweet sisterly kiss on the cheek. Naturally, the kind moment has their die-hard fans squealing with delight.

They later shared a genuine smile across their husbands, too.

Based on the photos, body language expert Judy James told Cosmopolitan that the women were "signaling friendship" in the abbey.

"It was clear Kate and Meghan were keen to signal bonds of warm friendship today, rather than the either distant or over-congruent displays from the last couple of outings," she said. According to James, Meghan seemed to be the one who was making the most effort to "reignite that spark" which was met with "active moves" from Kate.

Initially, fans were concerned the rumors about the two women feuding might be true based on one awkward interaction that was caught on camera a week prior to Commonwealth Day. On March 5, the fab four were spotted together for the first time since the holidays attending a meet and greet with the Queen. In the video, you can see that Kate follows the Queen closely as she looks at various fancy AF items on a table and Harry and Meghan predominantly hang back and stick to themselves. In this scenario, James said it looked like Meghan was "put in a corner."

I'm definitely not a body language expert, but to me, this looks like a super hush-hush moment at a formal event. It makes sense that Meghan and Kate weren't fawning all over each other while the Queen did her thing. Even James noted the gang probably chose to "make the celebration about Charles rather than a soap opera about Kate and Meghan."

Or, it could be that there isn't any bad blood at all and that these two women are just constantly pulled in a million directions taking care of their respective jobs, families, and personal wellness.