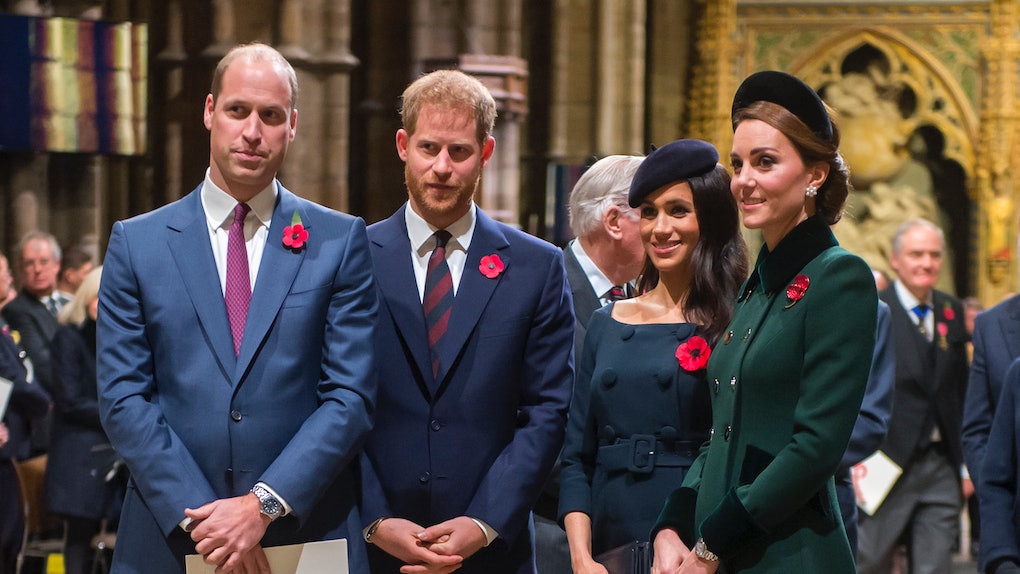 The Photos Of Meghan, Harry, William, & Kate At A Party For Prince Charles Are So Charming

There's a lot of drama going on in the entertainment world right now (looking at you, Kardashian family), and sometimes, it can be a bit overwhelming. Fortunately for us, the royal family has decided to give us all a breather from the chaos, and the photos of Meghan, Harry, William, and Kate at a party for Prince Charles are exactly the kind of content the world needs right now. Yes, fam, this story is all about a super-duper fancy party at Buckingham Palace, and will have zero drama (or as close to it as humanly possible), OK? OK.

Here's what went down: The Duke and Duchess of Sussex and the Duke and Duchess of Cambridge attended an event at Buckingham Palace that marked the fiftieth anniversary of the investiture of the Prince of Wales (aka, Prince William and Prince Harry's father, Prince Charles). This event marks the first time that the two princes and their wives have been out and about together since Christmas, so it's kind of a big deal.

Now, I know what you're thinking. What good is it to chat about a party without any photographic evidence of said party? Well, dear reader, have I got some news for you. There are photos, and they are all equally fancy AF.

The Duchess of Cambridge can do no wrong. Look how interested she is in this conversation:

Her smile says she's interested, but her mind is probably thinking about some cocktail appetizers.

Then, of course, there's Prince William posing with the man of the hour on the left:

If you're wondering where William's brother is, look no further. Here he is with a glowing Meghan Markle:

Look at that bump! Meghan looks trés chic, but that's nothing new for the Duchess of Sussex:

Is she not the most effervescent expectant mother you've ever seen?

And if you want a candid family portrait, here ya go:

Yep, that's Queen Elizabeth, Prince Charles, Camilla, and behind them are Kate, Prince William, Prince Harry, and Meghan. All smiling, I might add!

Clearly, this family has no drama going on, despite the rumors that Kate and Meghan are at odds with one another. It's been speculated that the two duchesses don't see eye to eye, and The Daily Telegraph reported back on Nov. 27, 2018, that "they are very different women, despite their similar circumstances. Meghan is extrovert, whereas Kate is quite shy." Elite Daily reached out to the Palace at the time about the report, but did not hear back by the time of publication.

Then, on Dec. 1, The Sun reported that the duchesses had an "explosive fight" before Meghan and Harry's wedding, pertaining to Princess Charlotte's bridesmaid dress where Kate reportedly put Meghan in her place for berating members of her team. But Buckingham Palace came to the defense of Meghan and Kate, denying that the two women were feuding, stating, "This never happened."

Honestly, you guys. Can you really see these two lovely women getting heated with each other?

C'mon. They're probably the coolest sister-in-laws this world has ever seen, so deal with it.