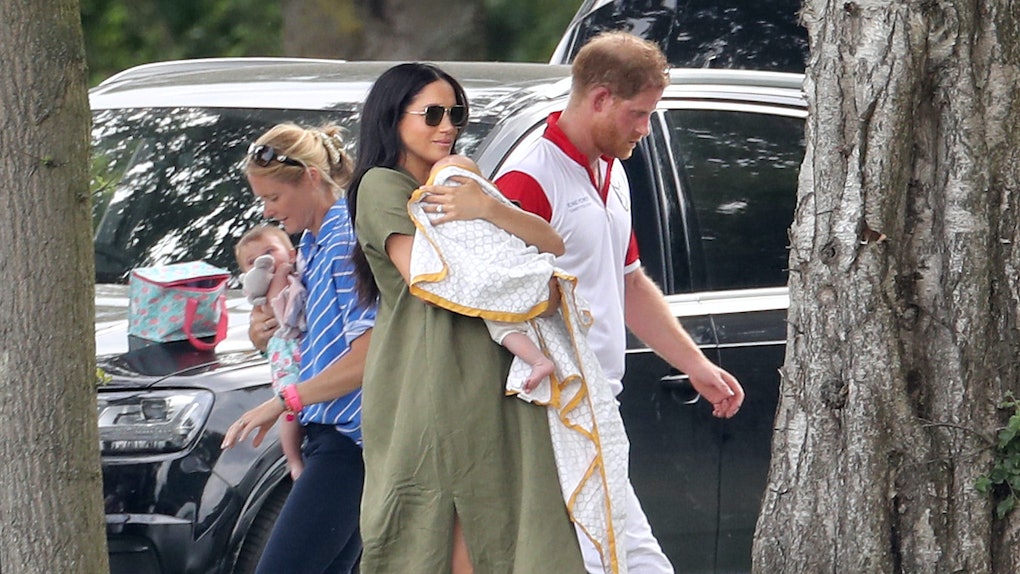 The Photos Of Meghan & Archie At Prince Harry's Polo Match Will Make You Say, "Awwwww"

What was your first big public outing as a child? No clue? Join the club. But you know who will have a clue one day? Little Archie Harrison Mountbatten-Windsor. See, the son of Meghan Markle and Prince Harry joined his mom, his aunt (that would be one Kate Middleton), and his three cousins Princess Charlotte, Prince George, and Prince Louis on an excursion to go check out his dad Prince Harry playing polo on King Power Royal Charity Polo Day at the Billingbear Polo Club. You know, just your average outing for a 2-month-old. Are there pics of this momentous occasion? Well, duh of course there are. And the photos of Meghan and Archie at Prince Harry's polo match are supes cute, y'all.

Meghan was decked out in a pair of sunnies and a casual olive dress that I need to own ASAP as she walked out of the parking lot with little Archie swaddled in her arms.

"She gave him a sweet kiss on the forehead as she made her way to the field," People magazine reported. And does that not sound like the most adorable thing ever? Let's take a look:

That. Little. Foot! I just want to squeeze it!

And check out this shot, which features a polo-ready Prince Harry looking on as his wife sweetly snuggles with their son by the car:

I just love this adorable fam so much!

This wasn't Meghan's first public appearance since giving birth to Archie on May 6, but this was the first time she's brought her little guy out and about with her, and I'm so happy that we are finally getting to see the duo experience new things together.

I mean, look at Meghan's protective pose... what an amazing mama!

According to People, the big day out was the first public playdate together for the four royal cousins, and is that some serious #squadgoals right there, or what?

Check out this shot of George and Megan — who's still cradling baby Archie — taking in the match together:

And here's one where you can also see Kate, who came to cheer on her own husband, Prince William.

Speaking of which, let's take a quick look at the boys riding around on the field with their mallets:

They just look like they are having the best time even though they're on opposing teams, don't they?