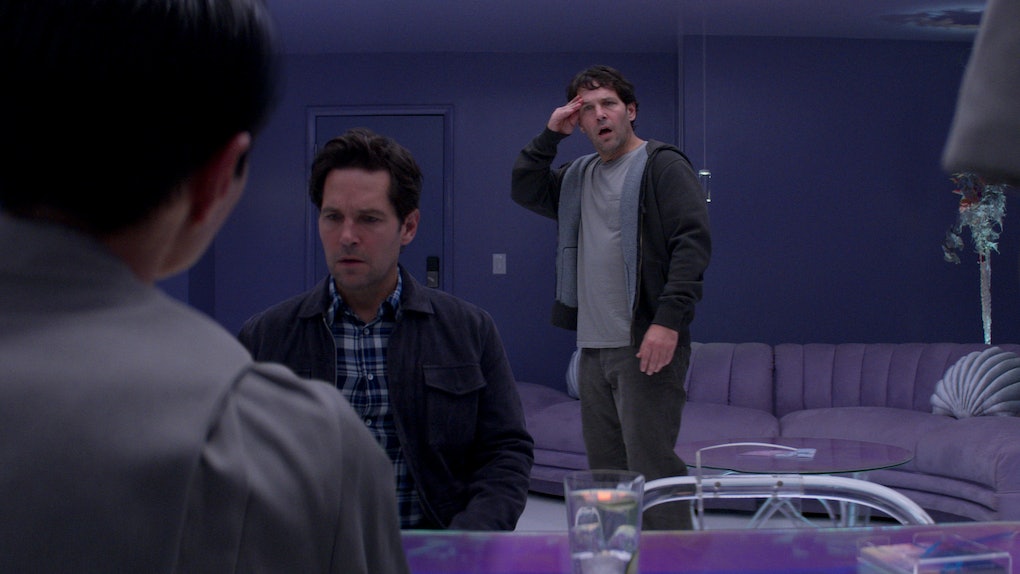 One of the hardest things about moving out of your parents' house is the discovery of what it's like to live with other people. Living with roommates and sharing dorms, apartments, and homes is one of the hardest adulthood adjustments. Honestly, it would just be a lot easier if you could just live with yourself, right? At least, that's what we all think. But these photos from Netflix's Living With Yourself, the new comedy starring Paul Rudd, suggest that living with yourself is the hardest thing of all.

Paul Rudd is best known nowadays for his role in Ant-Man as Scott Lang, where he's played a comic-relief version of the superhero. But Rudd's comedy career has been going since 1995, when he first starred alongside Alicia Silverstone in Clueless. It's not surprising, then, that he's parlayed his Ant-Man status into a lead role in a comedy series. It's only surprising it hasn't happened before now.

Living With Yourself is Rudd's first time as the lead in a TV series, Netflix or otherwise. Apparently, when it came to co-stars, Netflix couldn't find anyone worthy of playing against Rudd. So instead they cast... more Rudd. It's an entire Paul Rudd-fest coming to Netflix this October in Living With Yourself.

Here's the synopsis for the Netflix comedy:

The Netflix original series Living With Yourself is an inventive existential comedy that asks: do we really want to be better? Miles (Paul Rudd) is a man struggling in life. When he undergoes a novel spa treatment that promises to make him a better person, he finds he’s been replaced by a new and improved version of himself. As he deals with the unintended consequences of his actions, Miles finds he must fight for his wife Kate (Aisling Bea), his career, and his very identity. Told from multiple perspectives, the eight-episode series was created and written by Emmy Award winner Timothy Greenberg (The Daily Show with Jon Stewart), directed by Jonathan Dayton and Valerie Faris (The Battle of the Sexes, Little Miss Sunshine) and stars Paul Rudd and...Paul Rudd. Greenberg executive produces with Anthony Bregman and Jeff Stern for Likely Story, Tony Hernandez for Jax Media, Dayton, Faris, Rudd, and Jeff Blitz.

Living With Yourself has had kind of a complicated road to its Netflix release. The show was initially picked up as a pilot back in 2017, but over on the IFC/Sundance network. (At that time, Paul Rudd wasn't attached.) After budget issues forced the show to the sidelines, IFC released it back to Greenberg, who promptly shopped it over to Netflix.

Rudd was hired to lead the series in August of 2018 in the wake of the success of Ant-Man & The Wasp. Now, he's playing against himself.

The real question, though, is which Rudd is which?

Is the Rudd who looks like Scott Lang the real Miles?

Or is that the new and improved version?

Will the real Paul Rudd please stand up?

Living With Yourself launches with eight episodes on Friday, Oct. 18 on Netflix.