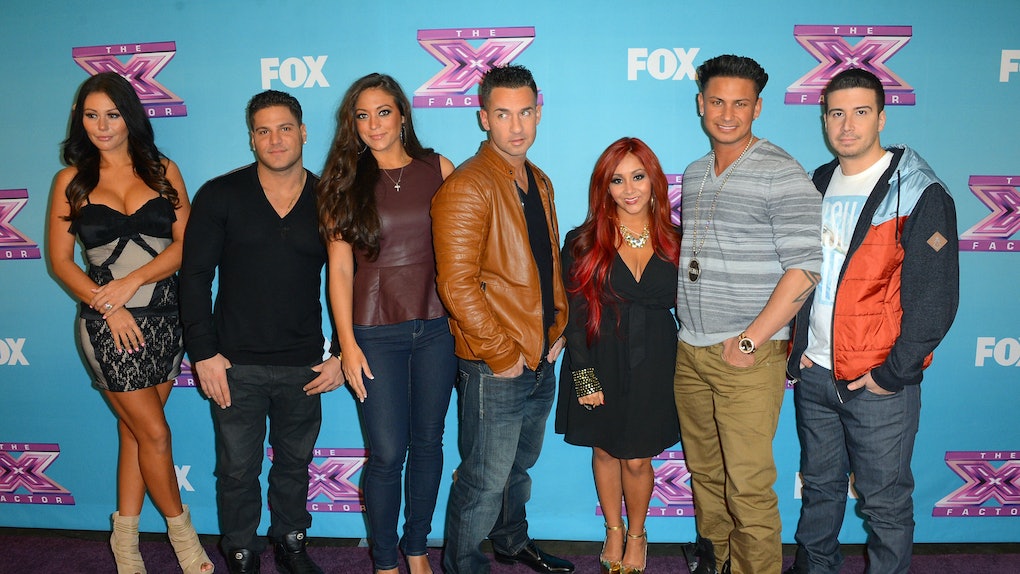 Mike Sorrentino has a bit of a situation on his hands. The former Jersey Shore star, aka The Situation, is currently serving an eight-month prison sentence for tax evasion in New York, but his fellow Jersey Shore cast members are making sure he doesn't feel lonely in prison. They visited him, fam! And there are photos to prove it. The photo of The Jersey Shore cast visiting Mike Sorrentino in jail is equal parts the sweetest and most confusing thing you'll see today. How is he posting on Instagram in prison?!

Sorrentino started serving his eight-month sentence on Jan. 15, 2019, at the Federal Correctional Institution in Otisville, New York. (That's the same prison Michael Cohen is currently serving time in, by the way.) The reality star posted a video for his fans with words of encouragement while he was on his way to Otisville, and he threw in some plugs for his social media in the video, because the hustle doesn't stop. It was clear from the video that being in prison wasn't going to stop him from connecting with his fans. He has his own publicist and team to help him out, of course, so they're probably the ones keeping The Situation in touch with his loyals fans while in the clink.

And thank the universe for his press team, because they're probably the ones who got the amazingness that is this photo out to the world.

CABS ARE HERE. Sorry, had to yell that. It was a knee-jerk reaction.

The photo (which appears to have been taken on a disposable camera) shows Sorrentino in his prison garb posing with his wife, Lauren Sorrentino, Ronnie Magro, JWoww, Snooki, and Deena Cortese.

The photo was captioned, "The Comeback Is Always Greater Than The Setback #FreeSitch."

Naturally, some of the cast members in the photo commented on the post sending positive vibes to their imprisoned buddy.

Their loyalty. Their love. Their friendship. It brings a tear to the eye.

Wait, where are Vinny and DJ Pauly D?!, you ask, panicked. Fear not!

They visited The Sitch a few weeks ago, according to Lauren Sorrentino's Instagram.

She posted three photos to her Instagram (again, seemingly taken via disposable camera), and used the same caption Sorrentino ended up using in his.

"THE COMEBACK is always GREATER than the setback 🙏🏼 #FreeSitch," she said. Positive mantras, people. They heal.

The other two photos showed DJ Pauly D, Sorrentino, and Vinny together, as well as all of the guys with Lauren. The guys are flexing in the shot of the three of them, because they're nothing if not consistently on-brand.

Vinny and Pauly assured Jersey Shore fans in an interview with Jenny McCarthy in April that Sorrentino is doing just fine, and that they all keep in constant contact.

"We talk to him every day. There's an app where we can talk to him, and he has a computer room that he goes to throughout the day," Vinny told McCarthy. "He sends me positive vibes. He gets me through my day."

Why? Am I? So emotional? About this?