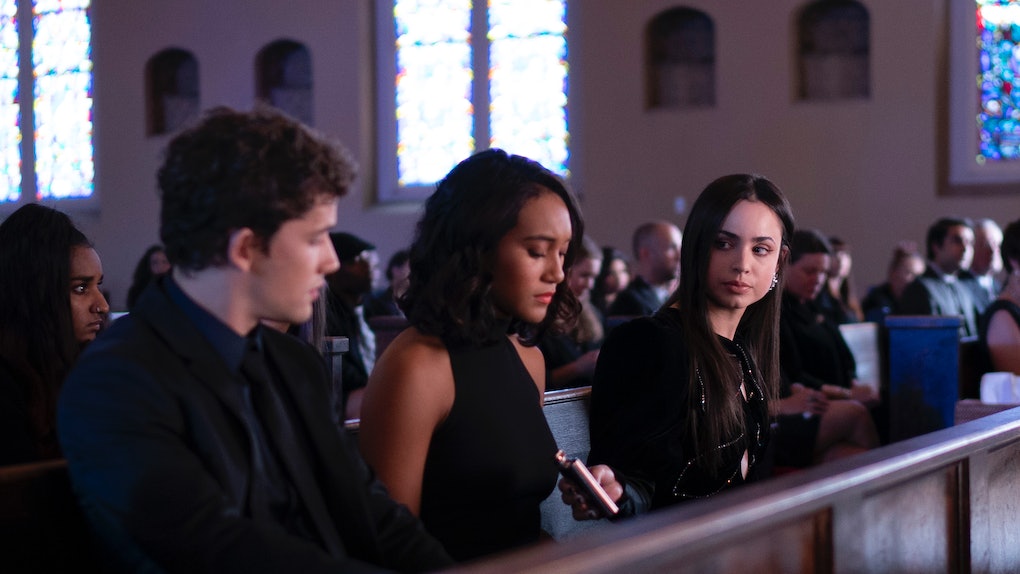 The students of Beacon Heights University are adjusting to life after Nolan Hotchkiss' mysterious murder on Pretty Little Liars: The Perfectionists. But just like the teens of Rosewood years ago, these kids aren't likely to relax as they process the shock of Nolan's death. Alison deftly worked to save Nolan's posse from questioning by providing authorities with a cover story, but that hasn't prevented Dylan, Ava, and Caitlin from getting involved in the mystery. The Perfectionists Season 1 Episode 3 promo hints that the kids are close to uncovering the truth about Nolan's sister Taylor, so let's break down what we can expect next week.

At the end of The Perfectionists' premiere episode, Nolan (Chris Mason) met with a hidden figure on the roof of BHU's Thorne Hall, telling them that his sister, who seemingly killed herself a year before, was alive. He and a reclusive Taylor (Hayley Erin) had been searching for answers about why their mother Claire (Kelly Rutherford) had amplified surveillance on Nolan and the trio of students he's blackmailing. The figure then presumingly shoved Nolan off the roof, leading to his death by impalement.

The murderer now knows that Taylor is alive, but March 27's "Sex, Lies and Alibis" revealed that Nolan originally sent Alison (Sasha Pieterse) a text to meet him on the roof of Thorne Hall. Either someone is messing with Alison already or an unaware Nolan assumed that the cloaked figure on the roof was her. If he did intend to tell Alison the truth, then he wanted her to find her doppelganger Taylor.

It may take some time before Alison puts together the clues about Taylor, but based on next episode's promo, Dylan (Eli Brown), Ava (Sofia Carson), and Caitlin (Sydney Park) may discover that secret first.

In the "...If One of Them Is Dead" preview, the trio agree to track down Nolan's killer before Officer Dana Booker (Klea Scott), the new head of security at the college, finds proof that "destroys" them. They're then seen in Taylor's shed in the woods, concluding that Nolan was there on the night he died. Taylor is nowhere to be found, but Ava might have caught a glimpse somehow, inexplicably mentioning "some blonde woman." Meanwhile, Mona (Janel Parrish) is locked out of the campus WiFi network because of suspicious account activity, which may deter her and Alison from their own investigation of Nolan's death.

While the students take a more hands-on approach to the murder and what Nolan left behind, Alison also starts from the beginning. According to the episode's official summary, she learns more about Taylor's suicide, which we now know didn't really happen. Freeform's episode synopsis reads:

The Perfectionists kick their investigating into high gear when they identify a possible suspect in Nolan’s murder. Alison begins to look into the circumstances surrounding the mysterious suicide of Taylor Hotchkiss. And seeing the Perfectionists juggle sleuthing with their intense academic demands, Alison decides to use her past in Rosewood as a way to mentor them through their current situation.

It sounds like both teacher and students are trying to learn something this time. We'll have to wait and see if either side uncovers the Hotchkisses' big secret.

Season 1 of Pretty Little Liars: The Perfectionists continues on Wednesday, April 3, at 8 p.m. ET on Freeform.

More like this
This 'The Handmaid’s Tale' Season 4, Episode 5 Promo Shows June In Chicago
By Ani Bundel
The 'Mare Of Easttown' Season 1, Episode 4 Promo Is Full Of Suspense
By Ani Bundel
The 'Grey's Anatomy' Season 17, Episode 14 Promo Teases The Big Japril Reunion
By Abby Monteil
Stay up to date