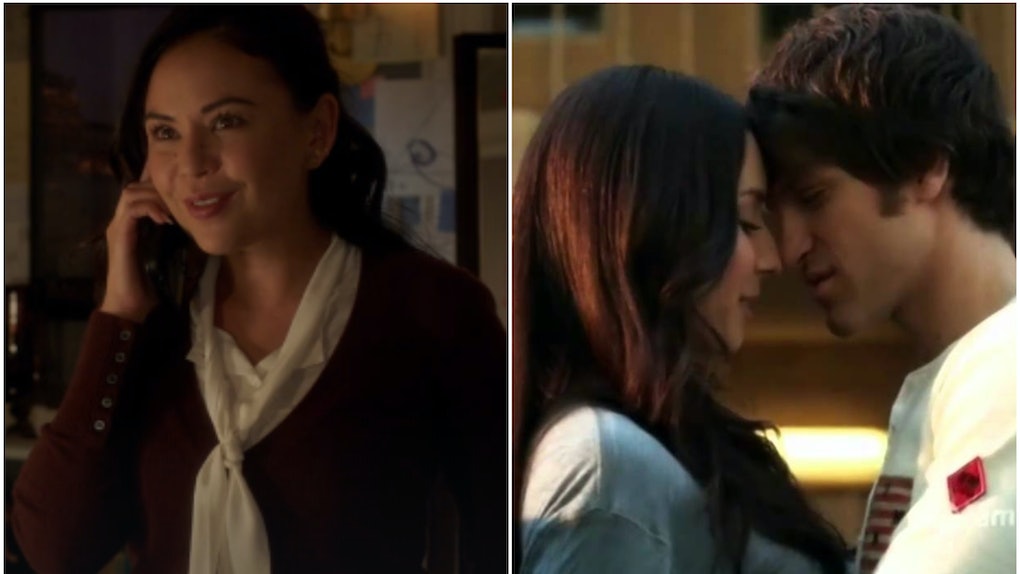 'The Perfectionists' Revealed Toby & Spencer Eloped, So That Clears Up That

ICYMI, former frenemies Alison (Sasha Pieterse) and Mona (Janel Parrish) are now BHU co-workers after recruitment and admissions staffer Mona hired Alison partially to calm down stressed students close to snapping from the school's pressure. Working closely with the school's behind-the-scenes operations, Mona freaked when Nolan Hotchkiss (Chris Mason), the son of a wealthy benefactor, was found impaled on campus. In March 27's episode, she insisted to Alison that Nolan was dead because, despite her algorithm determining Nolan as a threat to other students, she never told his mother Claire (Kelly Rutherford) the truth. Thus, in her eyes, her lack of action inspired Nolan's killer to act.

Alison managed to pull Mona out of her obsessive daze, advising her to stay connected to reality and other people while they figured out the role they had in Nolan's murder. By the end of the episode, Mona took her words to heart, calling hometown pal Hanna (Ashley Benson) for an update on their old gang. The Pretty Little Liars character wasn't actually heard or seen in the episode, but OG fans still received plenty of dirt about their old favorites.

While Hanna has welcomed a baby with Caleb (Tyler Blackburn), the juiciest gossip was about on-and-off-again pair Spencer (Troian Bellisario) and Toby (Keegan Allen). After reuniting as a couple at the end of Pretty Little Liars, the two recently eloped without telling anyone. The news was apparently as much of a surprise to Hanna as it was to Mona, who asked how she could send Spencer and Toby a wedding gift.

While Spencer and Toby have reached their happy ending, the March 20 premiere of The Perfectionists confirmed that at least one other Pretty Little Liars couple has hit roadblocks in their relationships. Alison took her teaching assistant job in Beacon Heights because she and Emily (Shay Mitchell) couldn't move past their rocky past together. According to Alison, any happiness they achieved was short-lived, and failing to trust each other led to Alison's decision to move to Oregon.

Mona's last attempt at love seems to have sputtered out too. When she was last seen in the Pretty Little Liars series finale, Mona was living in Paris with her police officer boyfriend. The pair kept the Drakes captive in a dollhouse, but in the Perfectionists pilot, Mona said her reasons for being in Paris "escaped" her. In addition to Mary and Alex potentially being on the loose, it appears that Mona's relationship in Paris also ended.

We'll have to wait and see if any further clarification about the Liars' current relationship statuses will happen on The Perfectionists.

Season 1 of Pretty Little Liars: The Perfectionists continues on Wednesday, April 3, at 8 p.m. ET on Freeform.

More like this
'Grey's Anatomy' Is Officially Renewed For Season 18 & Ellen Pompeo Will Return
By Ani Bundel
This 'Mare Of Easttown' Promo For Season 1, Episode 5 & Beyond Is So Intense
By Ani Bundel
'SNL's "Gen Z Hospital" Sketch Has Twitter Calling Out AAVE Appropriation
By Dylan Kickham
Stay up to date