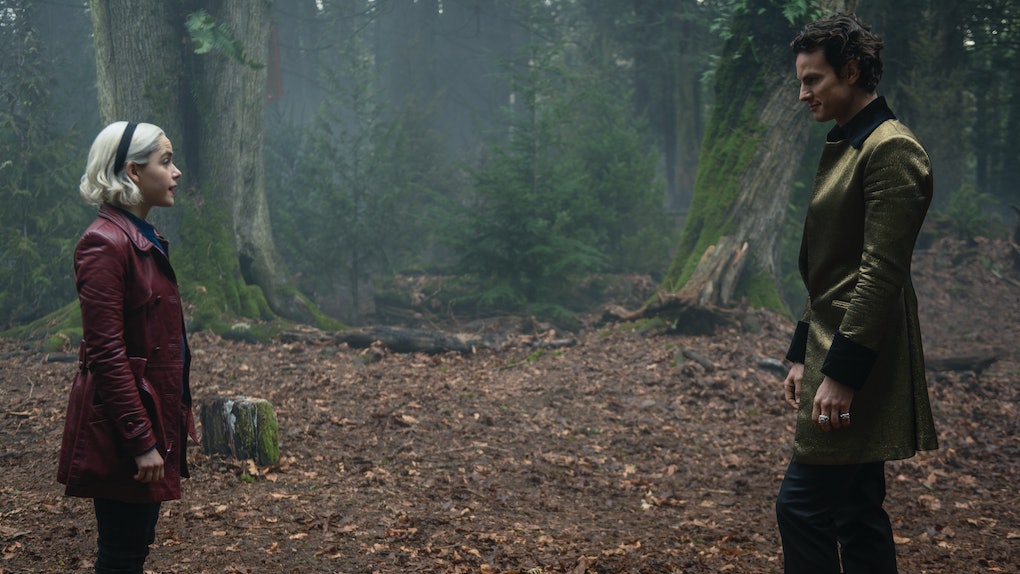 Chilling Adventures of Sabrina has returned with Part 2, bringing with it the promise of fulfilling storylines begun last fall in Part 1. Some things haven't changed, like Ms. Wardwell, aka Lilith, still scheming to make Sabrina's life hell because the Dark Lord favors her. Other things have, like Sabrina's developing romance with Nick Scratch after breaking up with Harvey last season. Moreover, the show still maintains that CW-like flavor it shares with Riverdale, including random musical numbers. The finale's "Masquerade" scene in Chilling Adventures Of Sabrina is a perfect example of how the show's cheesy roots can come out when fans least expect it. Warning: Spoilers for Chilling Adventures of Sabrina follow.

After a full season's worth of scheming, Ms. Wardwell finally sets Sabrina off on the last leg of fulfilling the prophecy when she has the girl create a Mandrake of herself and then kill it, a perverse way of having the character commit suicide without actual self-harm involved. (Except maybe being birthed via squash-like vegetation.)

With the prophecy fulfilled, Lucifer walks back out among the living in the form he first had as an angel. He's hot and ready to squick everyone out with his desires to marry a 16-year-old kid, who it turns out is also his daughter.

However, just because Sabrina has learned she's a Morningstar and not a Spellman doesn't mean she's going to knuckle under to dear old dad. She's been telling him no the whole way. Moreover, she's got help. Harvey and Roz becoming a couple means they have a connection. He can draw the wards Roz sees, and between the two of them and Theo, the Gates of Hell are kept partly closed. Lilith is also on Sabrina's side. After centuries of never gaining the promised Queen of Hell title from Lucifer, she's ready to throw him over and crown herself.

The result is that the Spellmans do a major glamour on both mortal and immortal allies to make them look like Hell's aristocracy, and bring Sabrina in singing "Masquerade" from Phantom of the Opera, as a distraction from what's happening around him. Anyone who ever thought Andrew Lloyd Webber's music is of the devil, here's your proof.

Here's the original scene from the musical, for comparison.

The hilarious part is, Sabrina's performance so enchants Satan, he gets halfway into the scheduled first dance they're supposed to do, (the Mephisto Waltz of the episode's title, natch) before he suddenly realizes the crowd around him are chanting incantations. Once Lucifer clues in, the masks fall away, revealing the survivors of the Church of the Night massacre as well as Sabrina's mortal friends, and chanting in tandem to take Satan down and imprison him in the Acheron Configuration Edward Spellman left Sabrina in the first season.

Sadly, the prison isn't strong enough, and Nick Scratch winds up sacrificing himself to imprison the Dark Lord once and for all. At least fans got to see him Phantom of the Opera it up before dying.

More like this
Joshua Bassett Almost Played Harvey In 'Chilling Adventures Of Sabrina' & I'm Shook
By Dylan Kickham
Netflix Renewed 'Bridgerton' For Seasons 3 & 4, Likely With More To Come
By Ani Bundel
These Fake 'Riverdale' Brand Names Are Even Better Than The Real Thing
By Rachel Varina
Stay up to date