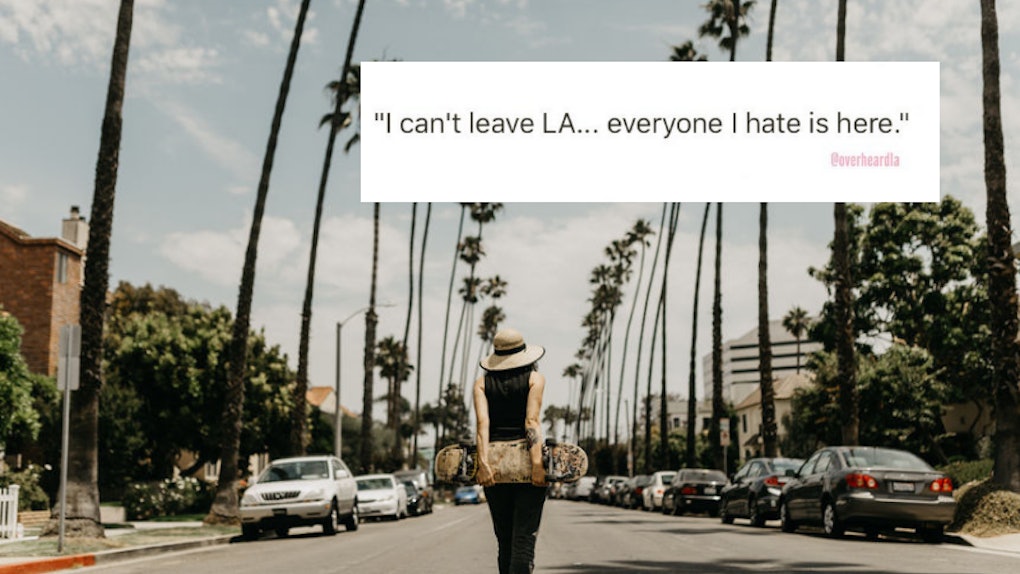 While I'm all for FOMO-inducing, scenic Instagrams, nothing makes me stop scrolling and start "liking" like a post more than a hilarious AF meme. Instagram may have started as an image-based gallery, but comedic account @OverheardLA — a collection of overheard conversations from people just going about their day — is a perfect example of why there's nothing better than a parody of regular citizens. Chances are that not only do you follow this account and have enjoyed a few chuckle fests with friends over the totally bizarre submissions, but that you might have submitted one or two gems of your own. So, who's the face behind the multi-million follower Overheard brand? Unsurprisingly, you may have never heard of him, and he prefers to keep it that way.

Unlike many who’ve pursued the elusive but totally covetable title of Instagram influencer and the fame that goes with it, Jesse Margolis wasn’t looking to get his name out when he started his breakout account, @OverheardLA, back in August 2015. In fact, up until a few years ago, Margolis kept his identity under wraps. He tells Elite Daily in an exclusive interview that going viral was completely unintentional, and that he was "never into social media." (He actually credits his friends for making his original Instagram account for him.)

A native New Yorker who was raised in Los Angeles, Margolis was at an L.A. health food store back in 2015 when he unexpectedly caught wind of a completely satirical moment (it apparently involved a conversation about vegan foods, freezing eggs, and tanning).

"I heard these two women having the most absurd conversation in history and I posted that on my personal account, and I noticed that instead of getting 14 likes, it got 30 likes," he recalls. Just a few more days and viral posts later (Ireland Baldwin reshared his post on her Instagram), Margolis knew he was on to something, although he wasn't aware of what the account would become at the time.

He says, "The effect was immediate. I knew that there was something about it that resonated with people, the way that it didn’t use photography on a visual platform and the way it didn’t take itself seriously. The way it never uses hashtags in a serious way."

Even then, Margolis saw himself as an anti-influencer, originally thinking he might run the account for only a few months.

"I thought to myself, as someone who doesn’t really engage in that world, to have a platform can’t be a bad thing," he remembers. "So even if I just do this for a few months and it has 50,000 followers, you could then use that for something else."

It was only after a year of continued success and the launch of sister account @OverheardNY that Margolis realized that the project was here to stay and was only going to get bigger.

"It took me about a year to figure out that it was a brand and what that brand could be and what the potential of Instagram was," he explains. "Once Instagram brought in the Story feature and we launched our second account in New York, I started to really have a vision for it being something."

That vision included disassociating himself as the curator of the account, which now has 1 million followers and counting. Margolis hoped that the anonymity would take out the individual personality of an account and instead make it a living and breathing space where Angelenos could come together to make light of the oft bizarre frivolities and eccentricities of L.A. life. In fact, he believes that @OverheardLA becoming a "faceless part of the city and not attached to some personality or ego" has led to its enduring popularity.

"I feel really lucky because I feel like I have a really incredible platform, but I don’t actually have to be some cheesy Instagrammer who people really like for a year then hate," he admits. Margolis seems grateful he's been able to navigate his way behind the scenes as an influencer.

Since posting his initial eavesdropping venture to the account, it's exploded. If you head over to @OverheardLA today, you'll see the ~struggles~ of life in the city of excess (like wearing white jeans, modern dating, and choosing your spin class membership over toilet paper because #priorities) are all captured. Eavesdropping denizens send their hilarious submissions over to Margolis and his team (he has separate editors for his accounts all around the world) for a chance to be featured and read by his million followers, which includes a significant celebrity following from stars like J. Lo, Ireland Baldwin, Vanessa Hudgens, and Mandy Moore.

While he's seen Los Angeles evolve and grow up over the years, he believes "it still is the playground for extreme, absurd lifestyle and behaviors," and he is still fascinated by people like the "Burning Man-outfitted, health food store warrior" that you might not see anywhere else. However, with Overheard accounts now in San Francisco, New York, and London, Margolis says that while L.A. tends to be more "absurd," he's definitely noticed more overlap with metropolitan centers in recent years.

"I think a lot of major cities like Sydney, London, have this sort of similar first world bubble that’s both so entertaining to make fun of and interesting," he explains.

With thousands of successful posts under his belt and a small team to help sift through the countless submissions, the founder has figured out what works, and he's used the same comedic formula (no politics, no religion, and no gossip) to attract new followers and keep things fun for everyone. So, how does a submission catch his eye?

He doesn't have to think twice about it. “Originality," he says. "It’s so hard to spot true originality, and once in a while you get a submission that’s so, so good. It’s not about kale or avocados or Xanax, like something truly original.”

He continues, "The ideal submission is something where you read it, and 10 different people will have 10 different ideas about what actually happened and who those people were."

Judging from his continued aversion to fame (Margolis refuses to be photographed to avoid being identified), it's not surprising that he's shifted his focus from the inane everyday conversations that you just can't help overhearing into a multi-million-follower-strong Instagram cult with ties to branded accounts like Bumble, Uber, and luxe perfumerie Labo.

In the future, Margolis hopes to harness the idea of “overhearing culture" by releasing city guides, and starting an interview series to eventually grow into a "comedy slash media platform." On Oct. 9, 2018, his book We Only Dated For 11 Instagrams (titled after his favorite submission ever) was released. It's clear that he's come a long way from posting his initial eavesdropping venture.

Still, some things never change. For Margolis, Instagram fame isn't as glamorous as it might seem on paper. He definitely considers posting on Instagram "work" (although he admits that it's a lot of fun), and considering the hundreds of submissions he receives per day, there's definitely a share of "horrible submissions that are so bad that you can’t believe someone sent them in."

Still, bad submissions aside, it's something that he wouldn't choose to change for the world. He reflects, "It’s changed my life in the fact that I realize how much opportunity there is in social media, and it’s a really amazing feeing to be able to press a button and make people laugh."