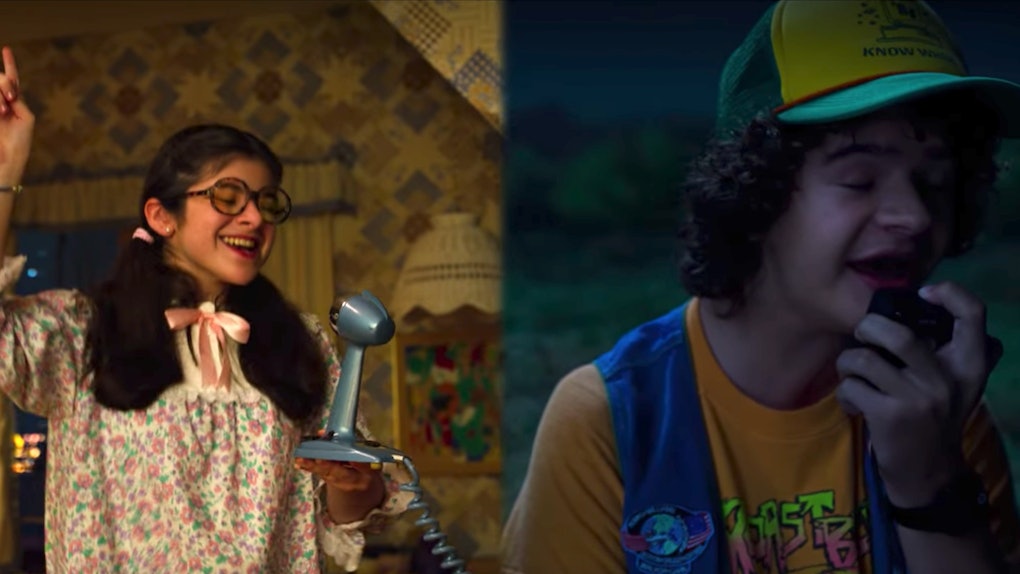 Stranger Things is all about paying homage to '80 classics, and in Season 3, the nostalgia even got musical. The new season surprised fans by including a dazzling karaoke moment in the middle of the show's most high-stakes moment, and it is safe to assume that song is still stuck in the head of every Stranger Things fan. Spoiler alert: This post includes spoilers from the Season 3 finale of Stranger Things. The epic lyrics to Dustin and Suzie's song on Stranger Things 3 tell the story of a truly classic film for everyone who loves '80s fantasy.

In the final episode of Stranger Things Season 3, viewers are shocked when Dustin and his long-distance girlfriend Suzie suddenly break into song while the lives of every other main character on the show remain in peril. The climactic moment comes as the Mind Flayer is chasing all of the kids and teens as they drive away from the mall, and Hopper and Joyce are deep within the Russian lab responsible for releasing the extra-dimensional monster. The only way to close the dimensional gate and stop the Mind Flayer is to enter a specific number — Planck's Constant — into a safe, but the only person who knows that number is Suzie.

Of course, it is not easy for Dustin to convince his new girlfriend that all of his friends are about to be killed by a giant, gooey, inter-dimensional monster unless she can tell him some random number, so she first insists that he perform "their song" together with her. That is when Dustin and Suzie break into a duet of "The NeverEnding Story," the title track from the 1984 children's fantasy movie of the same name.

The unexpected musical moment wound up saving the day in Hawkins, and it also provided fans who may not be familiar with the '80s synthpop track with a new earworm. "The NeverEnding Story" became a hit song upon its release in 1984. It was performed by the English pop singer Limahl, and the movie's success helped the song also become a hit in its own right. Check out the original music video for "The NeverEnding Story" by Limahl below:

It is no wonder why Stranger Things would make a reference to The NeverEnding Story — the movie fits so perfectly into the show's genre and would most definitely be a film that Dustin, Mike, Will, and Lucas are all probably obsessed with given their love for fantasy quests and the age of the movie's target audience.

Plus, the musical moment also provided a chance for Stranger Things star Gaten Matarazzo to show off his singing talents. Prior to becoming famous as Dustin on Stranger Things, Matarazzo was a Broadway actor with roles in Les Miserables and Priscilla: Queen of the Desert: The Musical. This year, he got to star in the Hollywood Bowl's Into the Woods revival. And his singing partner has an impressive list of Broadway credits as well. Gabriella Pizzolo, who plays Suzie, has starred in Matilda the Musical, Fun Home, and Sunday in the Park with George.

Hopefully, Stranger Things will get another season and fans can get even more '80s covers from Dustin and Suzie.