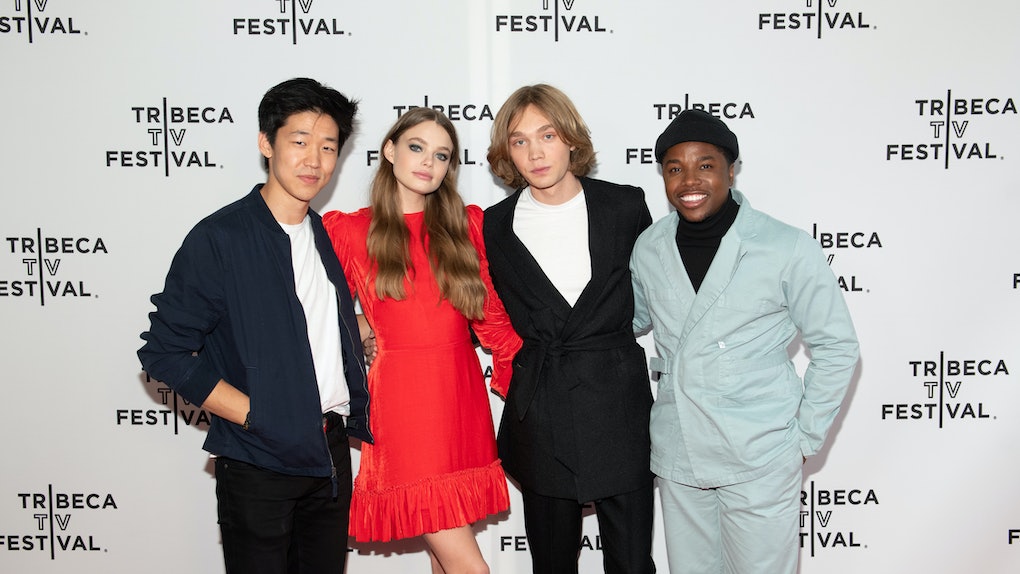 Before there was The Fault in Our Stars and Paper Towns, there was John Green's Looking for Alaska. The bestselling young adult author's debut novel hit shelves in 2005, taking readers to an isolated boarding school with whimsically intelligent kids. Soon to be a Hulu limited series, the story's focus on a vulnerable stage in life remains resonant with longtime admirers, and the Looking for Alaska cast's thoughts on the adaptation process will make these YA fans proud.

Green's novel takes place from the perspective of high school student Miles, played in the TV series by Charlie Plummer. Disillusioned with his ordinary suburban life, Miles is obsessed with famous figures' last words, and he decides to attend an Alabama boarding school to live out writer François Rabelais's last words and "go seek a Great Perhaps." At Culver Creek Preparatory High School, he makes friends with his roommate Chip (Denny Love), nicknamed The Colonel, a cautious observer Takumi (Jay Lee), and the free spirit Alaska (Kristine Froseth). Miles, dubbed Pudge by his new crew, quickly falls in love with Alaska, who has more secrets than it seems.

"We have a lot more time with these characters," Love tells Elite Daily at the series' Tribeca TV Festival premiere. "Everybody knows these characters so well, but you get to see different things of the story ... As much as you know about the characters, [the series] just makes you care more so you really get to know their lives before the book."

"It’s just a different medium for telling the story and our approach was to just give the audience the most immersive possible experience," series co-creator Josh Schwartz says. "We can take things that are in the book that are alluded to or happened off-screen and put them on screen and go deeper with some of the characters, especially the character Alaska."

Schwartz's past credits with his co-creator Stephanie Savage include The O.C. and Gossip Girl, so they're no strangers to developing content for, and starring, teenagers. "Everybody was a teenager, is a teenager, wants to be a teenager," Schwartz says. "It’s such a heightened time in your life when everything feels like life and death, and in case of the story, that is the issue that it’s grappling with, which is why I think the book has been so resonant for so long."

"I just think it’s about firsts," Savage says. "First love, first best friends, first big loss. And those firsts resonate with us for our entire lives."

While Schwartz has been tied to the Looking for Alaska adaptation since 2005, Love and Lee were unfamiliar with the book when they became involved with the project. Love recalls reading it in one day when he received his first audition. "I could tell it was just something special," he says. "It could’ve been very scary for me if I had understood how big this opportunity was, so I think the fact that I didn’t really know as much about the book was actually really helpful for me."

Lee was also quick to learn about Looking for Alaska's influence on readers. "I was a newbie when I first stepped onto that set, which means it was all the more special the first day being there, talking to everybody who had a relationship [with the book] and who chose to work on this thing for very personal reasons," he says.

It's tricky to trust a TV adaptation to capture the vulnerability of such a beloved YA novel, but with Green on board as an executive producer, fans can expect the original spirit of Looking for Alaska to smoothly transition to the small screen. Just as the book sparked discussion about grief and growing up, the cast and crew believe the Hulu series will accomplish the same on an even greater level.

"I hope people create the conversation, that we really are more honest about how we’re all doing, and viewers feel less alone, like I did when I read the book," Froseth says. "I think John puts all your feelings and emotions into words so well."

"My hope in writing this book was to write a book about radical hope and to think about the question of whether or not it is possible to live a hopeful life in the face of guilt and failure and the real horrors of life," Green explains. "And I think the show also explores that and I hope that that’s what people take away."

All eight episodes of Looking for Alaska premiere on Friday, Oct. 18, on Hulu. dd