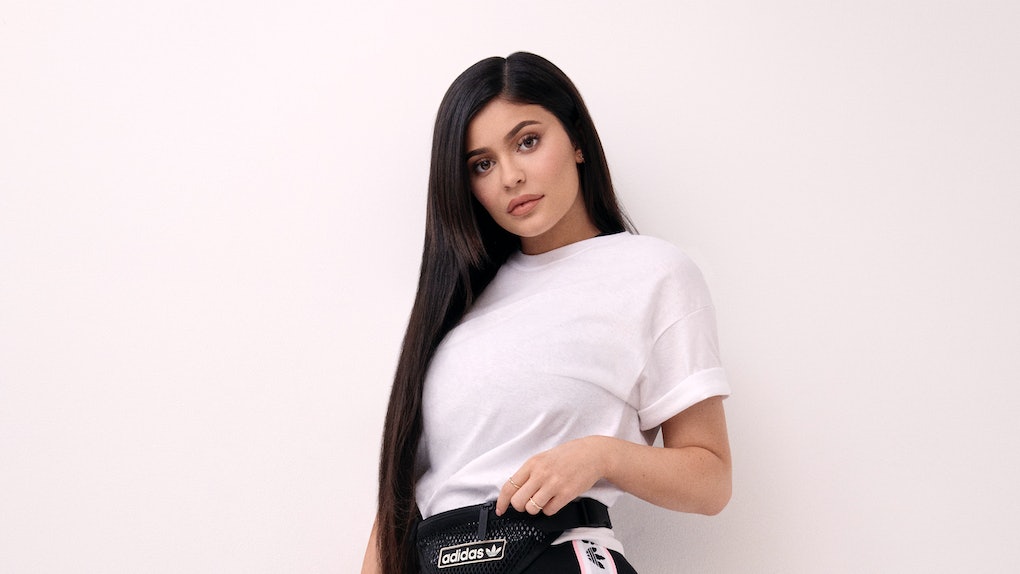 Another day, another big project for Kylie Jenner. Seriously, does the girl ever sleep? The Kylie Jenner x Adidas Originals campaign has just been revealed, and it's a match made in '90s heaven.

The partnership is specifically to promote the Adidas Original Falcon Dorf sneaker, which was first released the very same year that Jenner was born: 1997. "Falcon's blueprint, the Falcon Dorf, came-of-age in the late '90s as a daring statement injected into the pinnacle of an era where women weren’t afraid to break the rules and speak their truths," said Adidas in a press release. The brand continued that the shoe "pushed the boundaries," and I'd say Jenner, too, does exactly that.

The Falcon shoe is an Adidas classic that comes in a multitude of colors, but Jenner is putting her own stamp on it and reimagining the shoe's look. The sneaker is now "fresh and evolved in a grey, pink, black, and blue colorway," explained Adidas. "The Falcon's bold attitude is in sync with Jenner's way of life – a mindset which has propelled her beauty business and established her as a cultural icon," continued the brand. Bold is right when describing Jenner so this sounds like the dream team.

"I've always loved adidas and it's exciting now being part of the Originals family, especially for Falcon," revealed Jenner. And with that millennial pink upper, how could you not?

"The Falcon’s bold attitude is in sync with Jenner’s way of life – a mindset which has propelled her beauty business and established her as a cultural icon," Adidas stated in a press release.

Along with the Falcon sneakers, Jenner also models a lot of upcoming clothing from the brand, like these Adidas Snap Pants in Light Pink ($80; adidas.com).

Jenner wears the Adidas Knitted Body Suit ($100; adidas.com) layered underneath a classic T-shirt from the brand while she shows off the shoes. There's also a fanny pack around her waist because, duh.

"Falcon is inspired by the Falcon Dorf, an iconic model from the '90s: its bold and unapologetic DNA is at the core of today's Falcon and reflects the confident mindset of a new generation of female creative consumers," says Alegra O'Hare, Vice President of Global Brand Communications at Adidas Originals and Style. Bold, unapologetic, confident – all things that describe Jenner, too.

A behind the scenes image from the campaign photo shoot reveals Jenner taking a selfie with a retro camcorder!

The brand shared other behind the scenes photos that revealed Jenner having fun with some inflatable toys during the project. All in a days work, I suppose.

The Falcon has a definitive dad sneaker vibe to it, something Kylie has worn before.

In fact, Jenner recently wore a different colored version of the Falcons! Not once...

But twice! She really likes these sneakers. And I can tell why, they're super cute and look comfy AF.

The millennial pink Falcons will be available Sept. 6 at 3 a.m. ET. If they're anything like the rest of Jenner's products, they'll sell out fast, so prepare yourself to hit that order button ASAP.