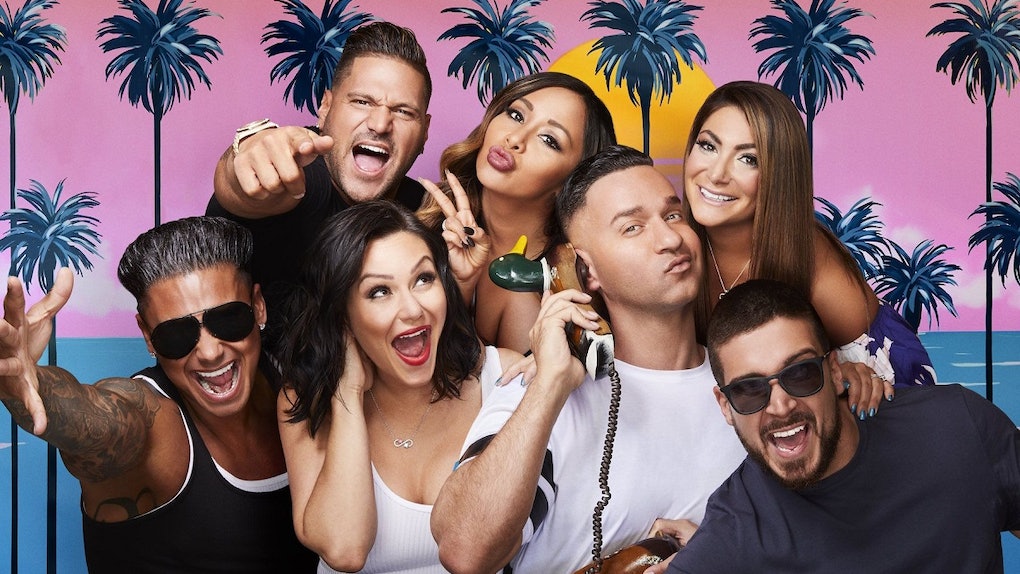 Happy holidays, guidos and guidettes! It's been a wild year for the Jersey Shore gang, but believe it or not, we're approaching the end of their Family Vacation antics in 2018. Wasn't it just yesterday that they finally returned to MTV with a shiny new revival? We have little doubt that the cast will be back for more filmed adventures next year, but until then, we still have reason to celebrate. The Jersey Shore Family Vacation Part 2 season finale is coming up, so here's what we can expect in the Dec. 13 episode.

Sadly, we've never managed to see a Jersey Shore episode following the cast at Christmastime, so we'll have to put that request on our TV wish lists for 2019. Having been filmed long before the holiday season, the Jersey Shore Family Vacation Season 2 finale will primarily focus on drama surrounding star Ronnie Ortiz-Magro and his on-and-off girlfriend Jen Harley. Although the couple's intense arguments have gained national attention throughout the year, the season finale teaser hints at an event that somehow flew under the press's radar. The clip shows the group recovering from a big night out when Ortiz-Magro receives a call from Harley, who breaks the news that someone robbed her house while she and their infant daughter were sleeping.

After revealing Harley's pregnancy in December 2017, the couple's relationship became a messy whirlwind. Following the birth of daughter Ariana Sky in April, Ortiz-Magro and Harley caused a stir by essentially airing their dirty laundry on social media more than a few times. From filming an argument for an Instagram Live video to Harley being arrested for domestic battery, the two have dominated much of Season 2's storyline. Maybe it's good that the season is ending and the couple will have some time away from the cameras.

Packed with the group's trips to Las Vegas and New Jersey, Season 2 of Jersey Shore Family Vacation was always on the move. If the show returns for either a third season or the MTV standard of "Season 2B," various milestone events in recent months may mean that episodes will follow the cast closer to home. When Mike "The Situation" Sorrentino was recently sentenced to eight months in prison for tax evasion, MTV cameras followed the rest of the cast during his hearing. The Situation also married longtime love Lauren Pesce in November, while co-star Jenni "JWoww" Farley filed for divorce from husband Roger Mathews in September. Cast member Deena Nicole Cortese is expected to have her first child any day now, and Nicole "Snooki" Polizzi announced on Thanksgiving Day that she was pregnant with her third child. Honestly, with all of these changes happening, a "day in the life"-esque season of Jersey Shore Family Vacation sounds great to me.

Here's hoping that the upcoming finale episode will fill us in on what to expect in future episodes. The Season 2 finale of Jersey Shore Family Vacation airs on Thursday, Dec. 13, at 8 p.m. ET on MTV.