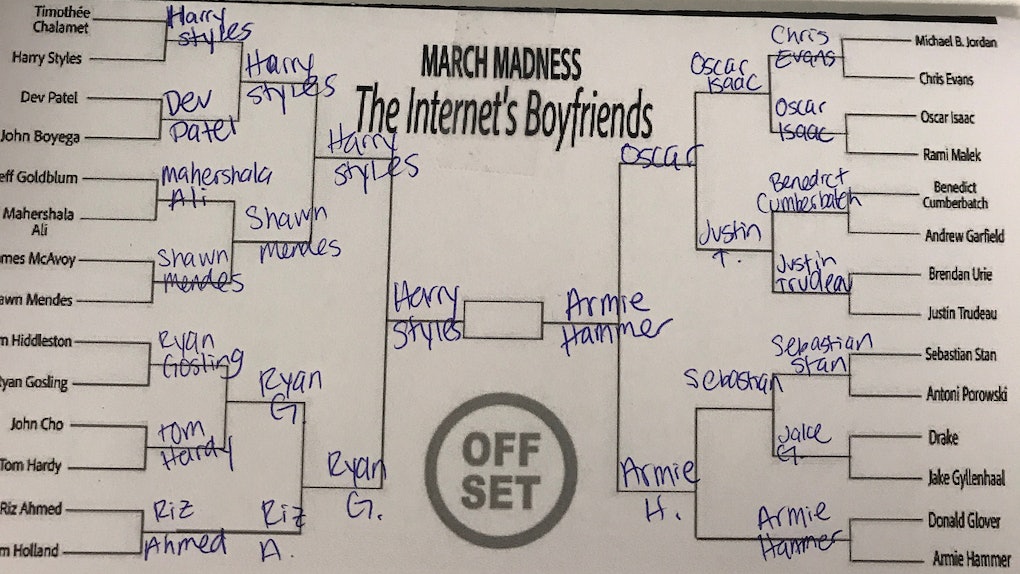 I've never understood the whole March Madness thing. This is for many reasons. For starters, I'm not a big sports person, and when I do decide to care about sports, it's usually about professional-level sports, not college sports. Then, there's the fact that I don't even get how those bracket things really work. OK, fine. It's not necessarily that I don't know how to make them; it's more that I haven't bothered to learn. But now, this internet boyfriend bracket challenge taking over Twitter has convinced me to maybe take the time to learn how to make my very own bracket.

What's the internet boyfriend bracket challenge, you ask? Well, instead of those March Madness charts (brackets? IDK) where people predict which of their favorite (or least favorite) basketball teams will win and lose, the internet boyfriend challenge asks people to do the same with — yep, you guessed it — internet boyfriends. Basically, UK account Off Set created and subsequently posted to Twitter a bracket of their own: one that forces you to choose between all of the dreamiest celebrity boyfriends you can imagine, from Tom Hardy to Justin Trudeau to Mahershala Ali. That's right, people. Competition is FIERCE.

They posted their bracket on Twitter, along with the caption, "We made the ultimate March Madness to definitely find out who is the Internet's Boyfriend. Twitter, do your thing."

And, oh, man, let me tell you: PEOPLE DID THEIR THING. People all over the world have been completing their very own boyfriend brackets and posting them on Twitter.

This guy has Tom Hardy and Sebastian Stan facing off for the final championship place. WHO DO YOU THINK WILL WIN? Personally, I'm team Tom Hardy because I didn't know who Sebastian Stan even was until this very moment, but, like, to each their own.

This woman literally just COULD NOT pick one winner, so she just settled for, you know, all of them taking home the gold. Although, I will say, based on her original bracket, that it seems like she was rooting for Timothée Chalamet.

While everyone else was struggling with the options they were giving, this lady is giving all of them a hard pass. No, instead her heart belongs to one man and one man only: Ben Mendelsohn.

Meanwhile, Twitter user Amy believes that the competition is a no-brainer. Harry Styles is the obvious winner.

But the fierce competition has called into question the loyalty of some of Harry Styles' most devoted fans. In an interview with Elite Daily, 26-year-old Marie*, a longtime Harry Styles super fan, explained that she came across the bracket when her best friend sent it her way. Since then, her perspective on celebrity crushes has totally been flipped around.

My best friend sent this to me and I immediately printed it out so I could get to work because this is right up my alley. I had to google a lot of the men on here and I truly came away with many new crushes," she tells Elite Daily. "Oscar Isaac made it very far for having just googling him moments before. Harry styles is and will forever be my number one, but having recently watched Call Me By Your Name, Armie Hammer is my new obsession."

She continues that it's impossible for her to pick between her final two, but that might change. "Come back to me in three months, post-Harry Styles in concert," she says.

Here is her final bracket that she printed out and hung in her cubicle:

Again, she left the center blank because she literally could not choose. Yep, that's right, people. These brackets are forcing people to question their everlasting love for Harry Styles. THIS IS NOT A JOKE.

OK, now time to get to work on your own internet boyfriend bracket. YOU GOT THIS.

*Indicates that names have been changed.