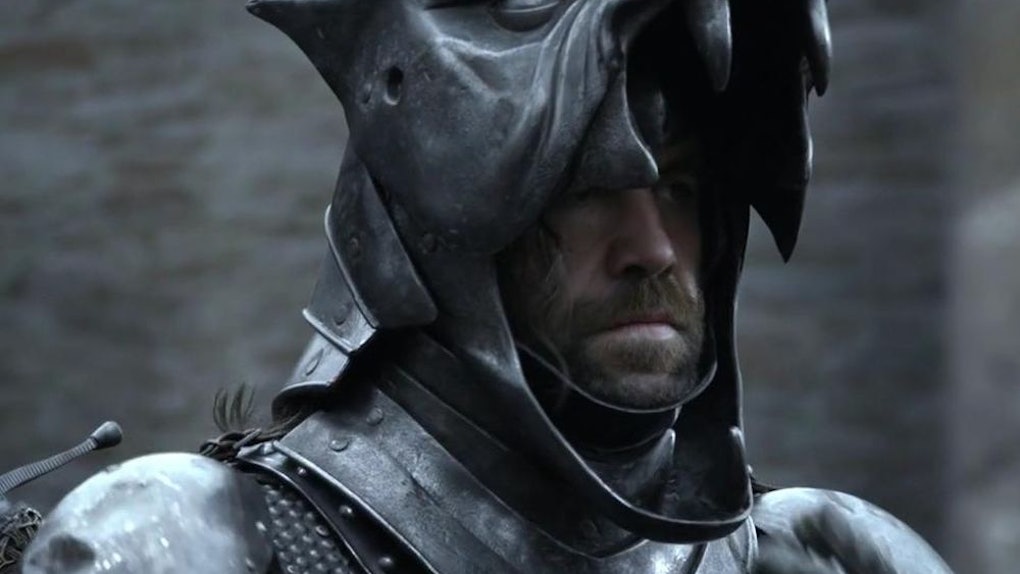 Game of Thrones is not just popular because of the main characters. Many of the show's fan favorites are the supporting ones. However, it's the ones who have been around since Season 1 who will most likely have the most satisfying payoffs this season, as circles and dangling plot threads will be closed. Perhaps the most satisfying this coming season will be how things end for Sandor Clegane, known as "The Hound." The Hound's backstory on Game Of Thrones makes his arrival at Winterfell this year all the sweeter.

Sandor is the second son of House Clegane, the young brother of Gregor "The Mountain" Clegane, the most feared knight in Westeros. Gregor burned half of Sandor's face as a child, leaving him scarred and afraid of fire. When fans meet Sandor, he's Joffrey Baratheon's bodyguard, a terrifying figure who heartlessly murders Arya Stark's friend Mycah when ordered.

However, Sandor is not a monster. The Hound falls in love with Joffrey's betrothed, Arya's sister Sansa, enchanted by her innocence and romantic dreams. When he decides to abdicate his position during the Battle of the Blackwater, she's the last one he visits. On the road, he runs into the Brotherhood without Banners, who have Arya. Though he tracks her down when she runs away and claims to want to ransom her to her family, in truth, he's protecting her and teaching her survival skills for the road.

He teaches Arya a little too well. When Brienne finds them at the end of Season 4, determined to become Arya's protector, Sandor's training leads Arya to take her for a fool. While the Hound and Brienne duke it out, she slips away. When the Hound loses the fight, he lays dying on a hillside, where she returns to steal his money. However, in honor of Mycah's memory, she does not put him down, leaving him instead to die slowly

Arya's cruelty saves the Hound's life. Rescued by Brother Ray and nursed back to health, the Hound discovers a quiet, peaceful world in the forest as part of Ray's flock. Unfortunately, his peace is short-lived. When fans find the Hound again in Season 6, his adopted people have been murdered. On his quest for vengeance, he runs back into the Brotherhood, who take him in, and lead him North to the Wall.

That's where Jon Snow discovers him in Season 7. The Hound becomes part of the team that captures a wight to prove the Night King's existence and is put in charge of the captive. Arriving back in King's Landing with his load, the Hound and Brienne meet again, and settle their differences, with the Hound glad to hear Arya is alive, having grown into a total badass.

The Hound is part of the brigade heading to Winterfell as Season 8 begins. It will be the first time he's seen Sansa since Season 2 and Arya since Season 4. Both have grown into stunning women in the meantime.

How will the Hound react to seeing them again? Fans will find out when Game of Thrones returns on April 14, 2019.