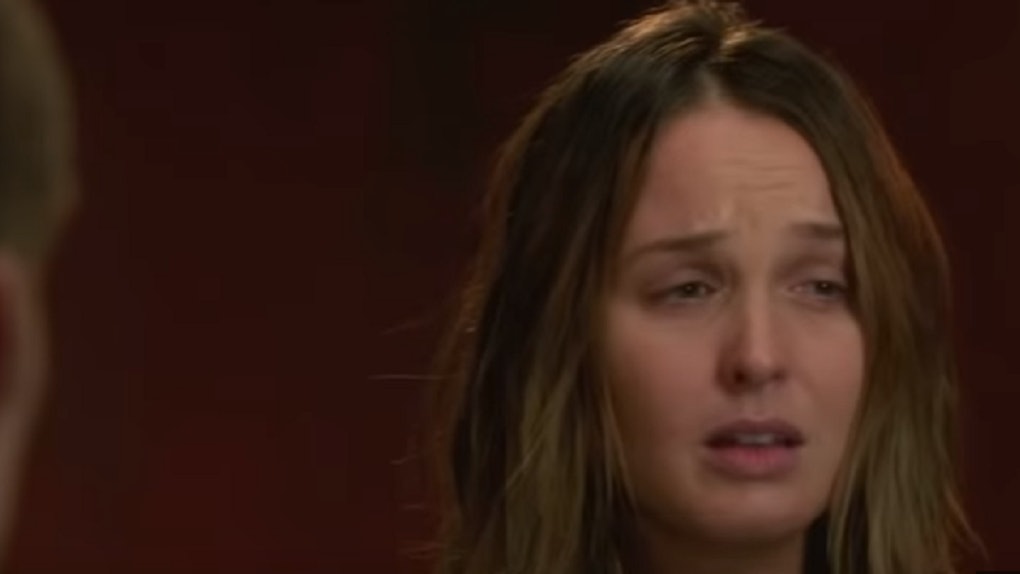 Grey's Anatomy's March 28 episode delivered a heartbreaking hour focusing on sexual assault and Jo's family history. The doctor successfully tracked down her birth mother, but their reunion wasn't exactly the sweet stuff worthy of viral news clips. Her mother's dark past triggered a particularly haunting experience of Jo's that no one knew before. The Grey's Anatomy Season 15 Episode 20 promo continues a focus on her family drama and the weak mental state it has caused within Jo. Let's break it down, but have your tissues at the ready.

ICYMI, March 28's "Silent All These Years" detailed Jo's (Camilla Luddington) meeting with her birth mother Vicki (Michelle Forbes), as well as her encounters with a patient who was reluctant to report her sexual assault. At first glance, Vicki was living a happy life in suburbia with her husband and kids. But in an emotional sit-down at a nearby diner, Jo pressed Vicki for more, explaining that the latter's attempts to give Jo a better life by abandoning her didn't play out in her favor. Vicki remained steely, prompting Jo to ask for information on her father so she could ask him about her beginnings instead.

Vicki then spilled that Jo's dad had died in a motorcycle accident, but he was also a TA who date-raped her in college. Vicki had hoped birthing Jo would fix her anger, and while she instantly loved her baby, Jo was still a painful reminder of what she had experienced. Although she was furious about how Vicki handled this, Jo opened up about getting an abortion after her first husband Paul threw her across the room when she was several weeks pregnant.

The preview clips for April 4's follow-up episode, "The Whole Package," reveal that Jo is still depressed about her visit and what she learned. While she wallows in bed, the promo shows Alex (Justin Chambers) confiding in Jo's old pal Link (Chris Carmack) about her mood and how she's remained quiet around him. This sends Link to the couple's loft to try talking to her, and the promo suggests that Jo shares the truth with him. But does she confess about her past to Alex?

Meanwhile, Meredith (Ellen Pompeo) has convinced Owen's sister Megan (Abigail Spencer) to stop by for a visit. Megan is thrilled about Owen (Kevin McKidd) and Teddy (Kim Raver) expecting a baby, but she doesn't quite know the extent of their complicated situation. Catherine (Debbie Allen) also returns to perform her first surgery since before she was sick, but it may not go as smoothly as planned.

Despite seeming to deliver most of the episode's emotional blows, Jo's storyline isn't mentioned in ABC's episode synopsis. The summary reads:

Owen and Teddy have to deal with the surprise arrival of Megan Hunt, who knows nothing about their situation. Catherine preps for her first surgery back on a war veteran who’s not emotionally prepared for his procedure. Meredith worries about DeLuca operating alone with Richard.

Here's hoping that Jo reaches a sense of peace about her past by the end of the episode. Season 15 of Grey's Anatomy continues on Thursday, April 4, at 8 p.m. ET on ABC.