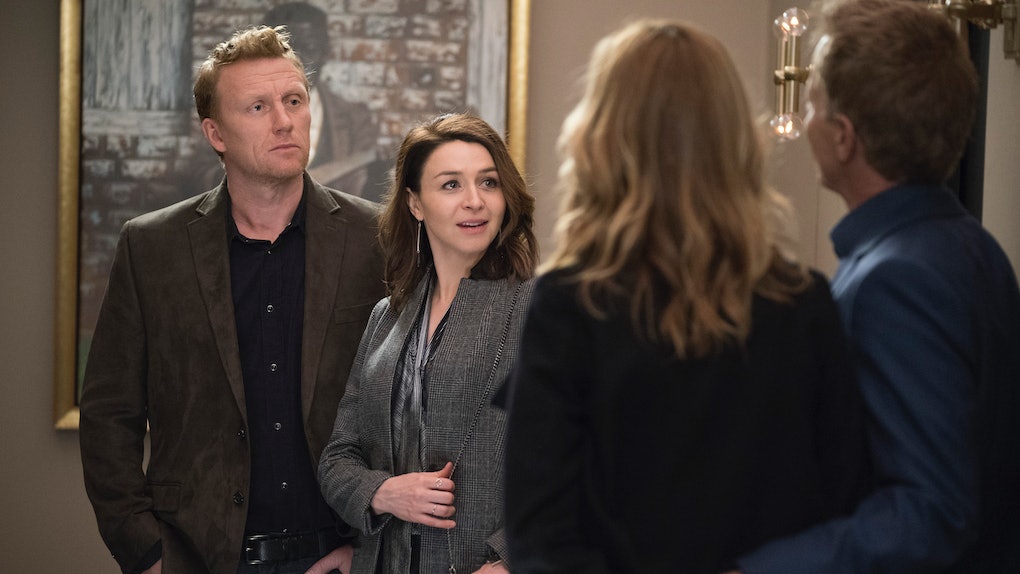 Before Season 15 of Grey's Anatomy began, the creative team promised it would involve renewed focus on Meredith's love life, but even veteran Grey's Anatomy fans probably couldn't anticipate the amount of drama the season has dedicated to everyone else's relationships. While Meredith is still in the honeymoon stage of her budding relationship with DeLuca, other doctors are hitting romantic roadblocks. In March 7's episode, Amelia broke up with Owen, but these two are far from being through with each other. The Grey's Anatomy Season 15 Episode 17 promo promises that Owen's love life is getting even more complicated.

ICYMI, everything that Owen (Kevin McKidd) and Amelia (Caterina Scorscone) have been through the past few weeks has finally caught up with them. After they handed over Betty and Leo to Betty's parents, Amelia was fixated on how taking care of children caused her and Owen to fall back in love. Convinced that Owen's feelings for Teddy (Kim Raver) would return after she had his baby, Amelia suggested they were over, but Leo quickly returning to their care messed with that plan.

In March 7's "Blood and Water," the pair's debates about the terms of Leo's adoption culminated with Owen declaring he wanted Amelia in his life. Amelia claimed that things were so different and complex now that it was easier for her to just walk away from him. Owen accused Amelia of sabotaging all of her relationships, but that didn't stop her from officially relinquishing all responsibility of Leo. With Betty out of the picture and Amelia's name absent from any paperwork regarding Leo, Owen is on his own again.

But the heart moves on quickly in the world of Grey Sloan Memorial. The promo for March 14's "And Dream of Sheep" hints that Owen and Teddy entertain the possibility of getting back together, while Amelia's subtle flirtation with Link (Chris Carmack) kicks up a notch.

While Meredith (Ellen Pompeo) and DeLuca (Giacomo Gianniotti) are still making out in discreet corners, the teaser shows Owen admitting to Teddy, "Amelia's out of the picture." Meanwhile, the clip's voiceover promises the potential of romance in "unexpected ways" as Amelia and Link share pointed glances. The promo closes with a lingering shot of the two sitting closely together, seemingly seconds away from kissing.

This isn't the first time chemistry has sparked between the two. Link asked Amelia out at the beginning of the season, and she even turned to him for comfort when Betty was near death. Since Meredith unceremoniously dumped Link right around Valentine's Day, he's definitely in need of someone who will treat him well, but is a heartbroken Amelia really the wisest option? And how will Owen react when he learns that Amelia may jump into a rebound relationship so quickly?

On the other hand, Owen and Teddy reuniting just before she gives birth would be a sweet finale to their long-winded story. The reason Teddy is pregnant is because Owen wanted to profess his love for her, so perhaps the writers can't resist a storybook ending for their relationship. Plus, with Owen now the sole guardian of Leo, any guilt about forming a new family with Teddy may not be so bad anymore.

The scenarios described in ABC's episode synopsis definitely hint at cozy circumstances encouraging Owen and Amelia to pursue others. The summary reads:

Ties are strained as Andrew and Carina confront an unforgiving family history. Meanwhile, Teddy and Owen work together on a married couple who is expecting, and Amelia attends a conference for alternative pain relief.

We'll have to wait and see if Owen still feels tied to his life with Amelia, or vice versa, as he works more with Teddy.