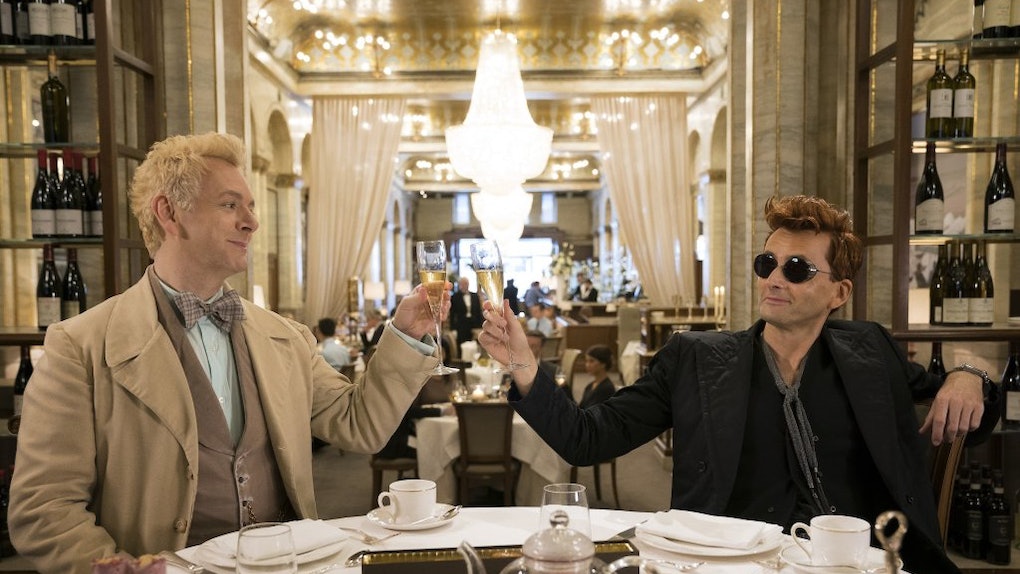 Quick, the apocalypse just got scheduled, and it's officially now on the calendar of Upcoming Things. Where did you put the Antichrist? This may sound like a crazy premise, but it just so happens to be the story of Good Omens, one of the funniest books ever written by Neil Gaiman and Terry Pratchett. A beloved cultural touchstone of fantasy and science fiction readers everywhere, Amazon secured the rights to turn the story into a miniseries, which comes out later this spring. The latest Good Omens trailer suggests it could be the streaming service's next big hit.

The story focuses on Aziraphale (Michael Sheen), an angel, and Crowley (David Tennant), a demon, representatives of their respective bosses on Earth. Over the millennia since their arrival, the two ancient enemies have formed an odd sort of friendship, as they are the only two who have been there the whole way. Moreover, they both are pretty cool with how Earth turned out and all the creature comforts of the planet they call home. So when word arrives the higher-ups are scheduling the Apocalypse, the two of them find themselves with only days to get their affairs in order and figure out where the Anti-Christ has gone off to.

Except neither of them wants the world to end. Instead, the two friends decide to band together, cancel the apocalypse, stop the whole thing in its tracks and have a nice cup of tea.

Of course, all of this was already foreseen by Agnes Nutter, a 17th-century witch. She is the author of The Nice and Accurate Prophecies of Agnes Nutter, Witch, which never went anywhere on the Times bestseller list, despite being the only book of prophecies that actually knew what it was on about. Luckily, her great-great-great-etc-granddaughter Anathema Device (Adria Arjona), kept a copy, and she's here to help the otherworldly pair to stop the Four Horseman from going through with the Apocalypse.

The series features a surprising all-star cast, including Jon Hamm as the ArchAngel Gabriel, Heaven's middle manager. Think Michael Scott, but far better dressed and with the certainty of God on his side. As for the big bosses in the sky and down below, one is played by Benedict Cumberbatch, and the other by Frances McDormand. I shouldn't have to tell you which is which.

This new trailer also (finally) introduces the Anti-Christ himself, little Adam, and his pack of friends, who in the novel are referred to as "Them." Also, this is the first time fans have gotten a look at the Four Horsemen as well. Considering they're here to bring pestilence and famine and what not, they all look pretty fit. Well, everyone but Death anyway, but that's to be expected.

Good Omens will run six episodes. Unlike Gaiman's other series adaptation which also premieres this spring, American Gods, it is planned as a one-off miniseries, with no Season 2 to follow. Best to enjoy the apocalypse while it lasts then, no?

Good Omens will arrive on Amazon with all six episodes available for streaming starting on May 31, 2019.