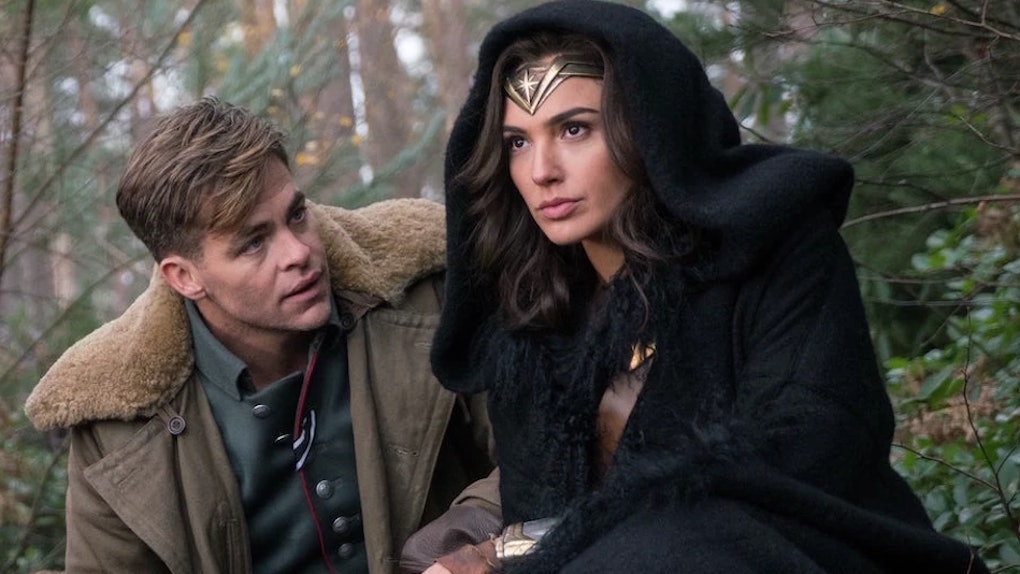 The First 'Wonder Woman 1984' Poster Is Here & It Is POWERFUL

Wonder Woman is back and she's bolder than ever. The first Wonder Woman 1984 poster is here and it shows Wonder Woman in the power stance to end all power stances. On the poster, Gal Gadot as Wonder Woman stands in a golden suit in front of a vibrant, technicolor pattern of jagged stripes. She looks super powerful, and also perfectly in keeping with the aesthetics of the movie's 1984 setting.

Director Patty Jenkins and Gadot both released this first poster on Twitter on June 5, which is exactly one year from the sequel movie's release date of June 5, 2020. The poster release came as part of some slightly disappointing news: Warner Bros. decided not to hold a Wonder Woman 1984 panel at San Diego Comic Con this year, even though many fans had been expecting to get a sneak peek of the movie at the event. Instead, the studio will be waiting until December of this year to begin doing the majority of the Wonder Woman 1984 press campaign. Jenkins addressed the news in a tweet, but also provided fans with their first look at 1980s-era Wonder Woman. She said:

By now you’ve heard: WB isn’t going to Hall H this year. We’re so sad to miss you there! And waiting until Dec. to start our official #WW84 campaign in full-- But the truth is… we can just… barely… wait…

Gadot also tweeted about the sneak peek, saying: "I cannot wait to share #WW84 with you all!! Until then we thought you might want to see this.."

A lot of the plot details of Wonder Woman 1984 are still being kept under wraps. Fans do know that the sequel will see Wonder Woman (aka Diana) in a brand new era, a few decades after the first movie's World War I setting. Kristen Wiig will play Cheetah, Wonder Woman's nemesis, and Chris Pine will be returning to play Steve Trevor. It's still unclear, though, how exactly Pine's character makes his way to the 1980s when (spoiler alert) he died in the first movie. Fans will likely have to wait until Wonder Woman 1984 premieres to find out that answer.

It's exciting to see Wonder Woman continue in a second movie and into another era. Jenkins has said that she believes the character and all she represents have an important place in culture. She told Variety:

I think the legacy of Wonder Woman is a different kind of hero, one that hits the same marks but also really is about love and empowerment in a slightly different way.

Jenkins also said that she'd love to see a world where the fact that Wonder Woman is a woman isn't even the first thing people notice about her. She said:

Hopefully the Wonder Woman sequel will get us one step closer to that "last-wave feminist" world. Wonder Woman 1984 flies into theaters on June 5, 2020.