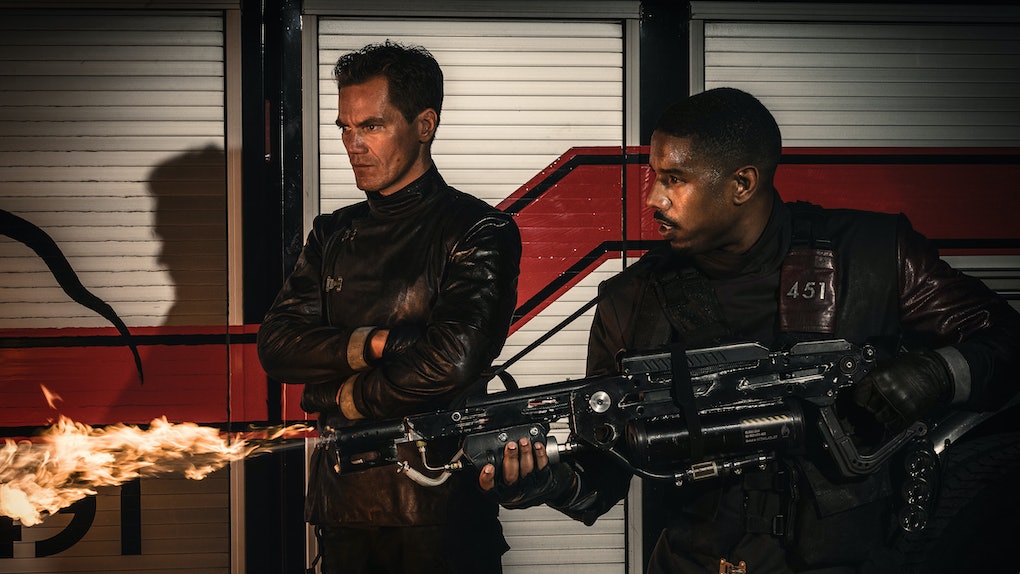 The 'Fahrenheit 451' Trailer Is Here & Michale B. Jordan Is Lit AF, Literally

I'm going to need a fan, because Michael B. Jordan is hot in the new trailer for HBO's Fahrenheit 451. Part dystopian thriller, part political commentary, and part TV event that lets us stare at Jordan in tight-fitting futuristic suits for two hours, Fahrenheit 451 is one of the most highly-anticipated TV movies of the year. HBO's movie may be based on Ray Bradbury's 1953 novel, but if the Fahrenheit 451 trailer is any indication, this is Jordan's time to shine — literally.

Jordan plays Guy Montag, a fireman who burns books for a living (in the dystopian society, that's what firemen do). At first, he's perfectly OK with following the instructions of his commander and mentor, Captain Beatty (Michael Shannon), but he soon comes to realize that banning and burning books is destroying citizens' knowledge and strengthening the autocracy's grip on society. Montag's revelation spurs him to join a resistance group who fight against the rigid censorship, and even though he could easily be killed — especially when faced with a cunning adversary like Beatty — he persists. The trailer promises an intense, flame-filled battle between Montag and Beatty, but don't let the theatrics fool you: Fahrenheit 451 is every bit the timely political commentary about free speech and the dangers of government censorship.

The trailer opens with Montag speaking to a classroom full of students who have never seen books — and who actively boo when Montag holds them up. "We've burned almost every physical book in the country," he tells them. "So by the time you guys grow up, there won't be one book left." Clearly, Montag has yet to see the issue with this (talk about drinking the Kool-Aid), but he quickly comes to his senses. "I want to know why we burn," he asks Beatty later in the trailer. Beatty's response is so creepy it's could come directly out of an episode of The Handmaid's Tale:

We are not born equal. We must be made equal by the fire. And then we can be happy.

Doesn't that just chill your bones? I have goosebumps. Apparently, Beatty's words freaked out Montag, too, because just a few shots later, he begins looking at the world around him differently, and he quickly meets a group of resistance fighters who are trying to change the corrupt system Montag has spent his whole life protecting. "We have an important task for you," the group's leader tells him (in a bunker filled with books). The group has been attempting to memorize and share the world's most important literary works, but with Montag's help, they can take their quest to new heights. "If anybody sees me, I'm dead," says Montag, but he pushes forward anyways.

Fahrenheit 451 may be mostly about paper — paper burns at 451 degrees fahrenheit — but it's also about technology. Throughout the trailer, technology is used to control citizens' lives: security cameras follow people everywhere, even in their own homes, Alexa-like computer systems give constant feedback, and video messages are projected onto buildings.

In one especially creepy moment, the computer system in Montag's house asks, "What's wrong Montag? Your vitals have been off recently." When Montag asks if firemen used to actually put out fires — instead of burning books, like he's tasked with doing — the system responds with propaganda: "That's a classic lie," it says while showing him images of people burning books as far back as the 18th century. "Have you used your drops today?" Like the other technologies the government has created to keep its citizens in check, the eye drops serve to control his mind and will help steer him back in the "right" direction — the direction where he goes along with the government without questioning its practices.

Even without Michael B. Jordan, Fahrenheit 451 sounds like a whirlwind HBO movie. But with him? You know that's not something I'll miss. Maybe he'll have to take his shirt off to battle the high temps?