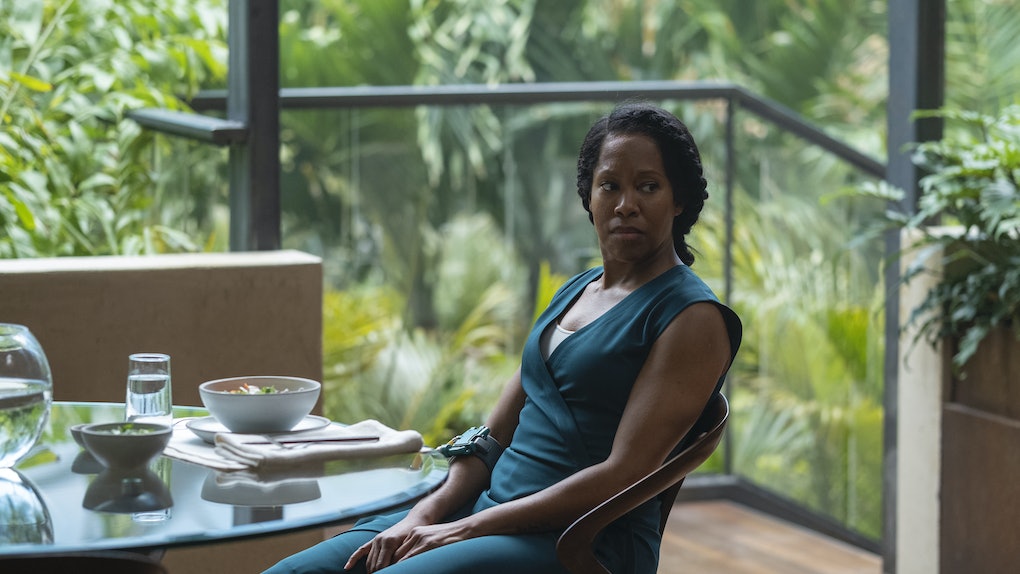 Trillionaire Lady Trieu seems a genuine marvel of an inventor in HBO's Watchmen. Considering that this is a society where computer technology is decades behind where it is now, her creations of things like the biosphere vivarium and the Millennium Clock are downright incredible. As she tells her assembled guests, she was 15 when she graduated from MIT. Four years later, she bought it. But Trieu's experiments are sometimes unorthodox, as evidenced by the random elephant during Angela's treatment in Watchmen. Warning: Spoilers for Watchmen follow.

"So, you've taken someone else's Nostalgia," says the advert. "Don't panic. We can help. Introducing neumo-dialysis, a treatment by Trieu Pharmaceuticals."

At this moment, it goes on to say, foreign memories are invading Angela's brain with "Recollective Infestation." This treatment to flush them out takes a while to work and causes the person's own memories to flood their mind as the invaders clear out.

If Angela's memories of her grandfather's life were terrible, wait until everyone gets a load of her own. Angela was born in the 51st state Vietnam. The war ended, and the state created, after a 50-foot tall Doctor Manhattan walked through, carpet bombing the entire country, murdering Viet-Cong.

Angela's memories are filled with the state's Manhattan Day yearly celebration, full of cosplayers, reenactments, and fireworks. Angela's father, a soldier, was left with nothing to do when the war ended. Having cut off his mother, June, Marcus Abar settled in Nam, married, and had a daughter.

At 10-years-old, Angela was obsessed with the blaxploitation film Sister Night, the only video featuring black faces like her own. She was trying to convince her parents to rent it, when a terrorist attack blew up Manhattan Day, killing mom and dad. It took a while for Grandma June to get Angela, but her health was frail, and the journey too much. Before she could take the girl back to Tulsa, June died of a heart attack.

Stuck in an orphanage, Angela experienced revenge when the Saigon police asked her to identify the man who killed her parents. Angela vowed then and there to become a cop.

While Angela's memories are flooding her mind, William's memories are leaving via a tube in her arm, which leads to a locked room. Lady Trieu says that's necessary. Until treatment is complete, Angela seeing him could cause brain damage.

But Angela is determined to see William. Having lived her grandfather's life as Hooded Justice, she has questions. They both chose to become cops; they both then became masked vigilantes. Out of sheer frustration that he won't answer the door, she smashes it open.

Her grandfather isn't there. Instead, there's a high-tech cage, inside of which the other end of Angela's tube is hooked to an unconscious elephant.

Listen, I know they say, "an elephant never forgets," but what in heaven's name is this experimental animal abuse? Angela is horrified, ripping the tube from her arm, and running from the room.

There are so many unanswered questions about Nostalgia. Trieu calls it "one of her biggest failures." But then, why is she using it on her daughter? (Especially since said daughter is actually a clone of Trieu's mother, and Nostalgia is "restoring her memories.")

And if William isn't locked away, where did he go? Will Angela run into him and lose her mind?