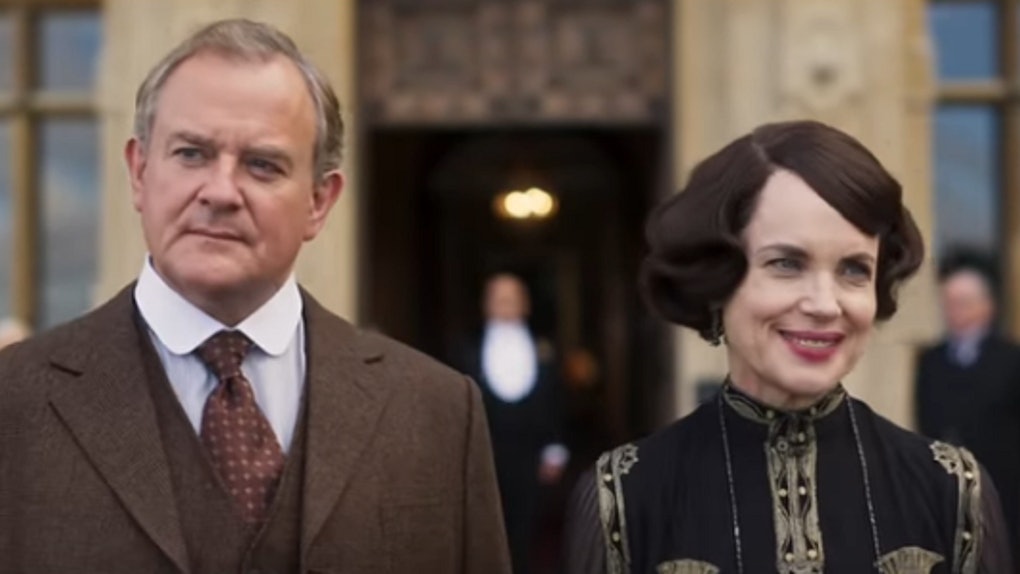 Lords and ladies, ready your curtsies. The Crawleys are welcoming viewers around the world back into the hallowed halls of Downton Abbey, and it almost feels as if fans never left the manor. In their world, the year is now 1927, and while that's barely any time since viewers last stepped into the home, two special guests are visiting Downton for the first time. The Downton Abbey trailer teases an exciting royal visit, but familiar faces will accompany viewers until then.

The full-length trailer for the Downton Abbey movie launched on May 21, catching viewers up with the Crawleys about a year and a half after the events of the series finale. The promo opens with establishing shots of the Downton property before the Crawleys welcome Edith and her family there. They come without servants, as Edith's husband Bertie (Henry Hadden-Paton) remarks, "It's 1927 — we're modern folk."

British society's changing landscape was a recurring theme throughout the original series, and that debate continues throughout the trailer. But before the question of whether the Crawleys can keep Downton arises, these early clips assure that not much else has changed within the family's everyday lives. Chauffeur-turned-brother-in-law Tom Branson (Allen Leech) is still at Downton with his daughter, while Lord and Lady Grantham (Hugh Bonneville and Elizabeth McGovern) are still happily in love. Family elders Violet (Maggie Smith) and Isobel (Penelope Wilton) are even chatting together as always.

The trailer then mirrors the pilot episode's arrival of news when the servants receive and deliver a letter from the royal family. King George V and Queen Mary, the grandparents of the future Queen Elizabeth II, are coming to Downton for a royal luncheon and dinner, prompting a massive cleaning of the house. Meanwhile, Mary is faltering under the pressure to run the special event and persuades the ever loyal Carson to briefly leave retirement and help prepare for the day.

In case you thought the entire movie was going to focus on regal flower arrangements and sweet reunions, think again. A conversation between Mary and Anna reveals that the Crawleys may be considering leaving Downton, while a romance for Thomas is also teased. Love may also be in store for widower Branson, but it looks like the entire brood comes together when the King and Queen arrive. The fate of Downton may be unclear in the trailer, but in one scene, Anna reminds Mary, "Downton Abbey's the heart of this community, and you're keeping it beating."

As housekeeper Mrs. Hughes once said, there's no rest for the wicked, and it looks like the Crawleys and their servants are keeping busy in this new story. Downton Abbey is in theaters on Friday, Sept. 20.