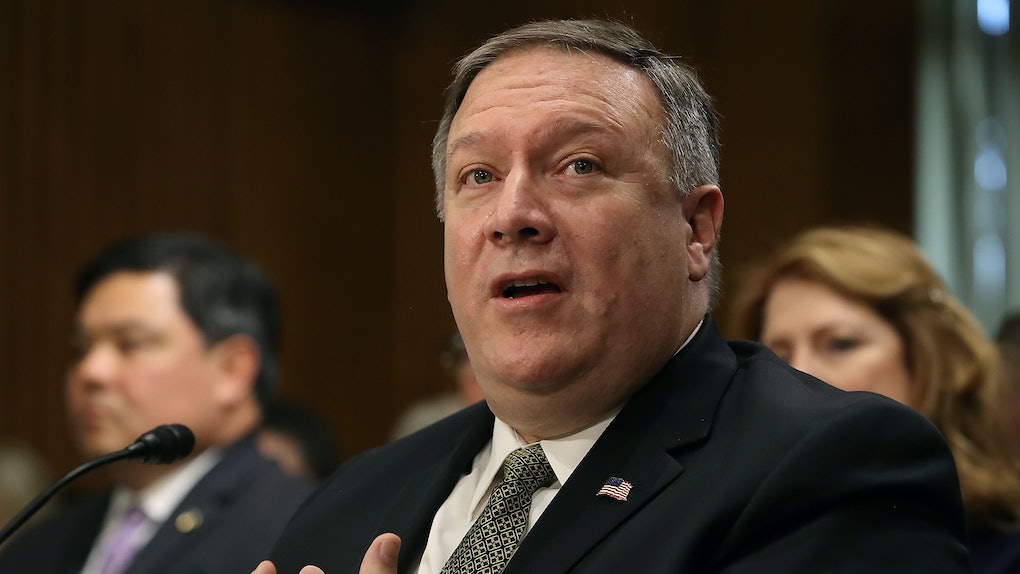 President Donald Trump fired Secretary of State Rex Tillerson on March 13, and his pick for a replacement is facing scrutiny. The president selected C.I.A. Director Mike Pompeo to take over in Tillerson's absence. The Senate questioned Trump's nominee on Thursday, April 12, and the confirmation hearing video of Pompeo discussing gay marriage is startling.

"I've worked with Mike Pompeo now for quite some time," Trump told reporters about his choice for Secretary of State on March 13. "Tremendous energy. Tremendous intellect. We're always on the same wave length."

The Senate will have to vote to confirm Pompeo's appointment after Thursday's hearing, and politicians are using this hearing as an opportunity to grill Pompeo on his stances.

Senator Cory Booker, for instance, asked the nominee on April 12 whether he thought being gay was a "perversion," which was something Pompeo had indicated when he was in the House of Representatives over the last decade.

"Senator, when I was a politician I had a very clear view on whether it was appropriate for two same-sex persons to marry and I stand by that," Pompeo replied.

Booker then pressed him on how his views would translate to those LGBTQ people under Pompeo's potential leadership at the State Department.

"Senator, I believe it's the case we have married gay couple as the C.I.A., you should know I treated them with the exact same set of rights," Pompeo said. "My respect for every individual regardless of their sexual orientation is the same."

You can see a video of their exchange here:

Pompeo is a former cavalry officer, who patrolled the Iron Curtain before the collapse of the Berlin Wall, according to his CIA biography. He served in the Army from 1986 to 1991. According to Fox News, Republican Pompeo represented the 4th congressional district of Kansas from 2011 to 2017, when he was sworn in as C.I.A. director. He was elected to Congress during the Tea Party movement, and his referral to "when I was a politician" appear to refer to this time period.

As a congressman, Pompeo sponsored legislation that would states prevent same-sex couples from marrying and protect nonprofits that opposed gay marriage, reported McClatchy. When he was appointed to the C.I.A. upon Trump's election in early 2017, Sen. Kamila Harris asked a similar question to Booker's. Pompeo told Harris in 2017 that he’d treat every employee “in a way that is appropriate and equal."

But his previous comments about gay marriage fly right in the face of what he's told members of congress at both hearings in 2017 and on April 12. As a congressman, Mike Pompeo released this statement just a few moments after the Supreme Court ruled in 2015 that gay marriage will be legalized nationwide,

I am deeply saddened by the Supreme Court’s ruling that imposes legalized gay marriage on the 70% of Kansans who voted to honor and protect the traditional definition of marriage as the union between one man and one woman. Creating, out of nowhere, a federal right to marry, flies in the face of centuries of shared understanding of our constitution. It is a shocking abuse of power. It is wrong. I will continue to fight to protect our most sacred institutions; Kansans and our nation deserve no less.

Sarah Margon, the Washington director of Human Rights Watch (HRW), told NBC News that there is "great reason to be concerned" about Pompeo's past record on LGBTQ issues.

"There could be some very serious consequences both here in the U.S. and also around the globe," she told NBC. "Tillerson didn't really go after the LGBT portion of foreign policy. Now you're going to see someone who, if confirmed, is explicitly anti-LGBT, and I think you're going to see reversals in policy. It's very dangerous."

"Good luck to Mike Pompeo during his Confirmation Hearing today," Trump tweeted on the morning of April 12. "He will be a great Secretary of State!"