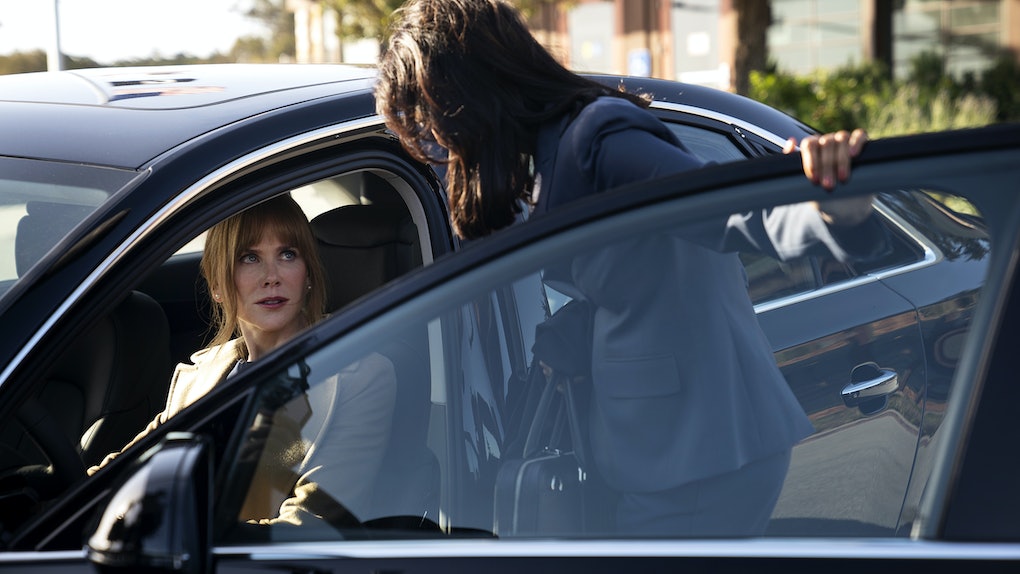 If there were an episode that guaranteed Nicole Kidman would be standing at the Emmy podium next year accepting the award for her performance as Celeste Wright, this was it. Episode 6, "The Bad Mother" put her on the witness stand, to testify that she was fit to be the mother of her sons, Josh and Max.

Under questioning from Katie Richmond (Poorna Jagannathan), her lawyer, Celeste came off as fans have always known her. She's a little frayed, a bit in denial, but generally a kind-hearted person, and someone who would do anything for her sons. But when Mary Louise's lawyer, Ira Farber (Denis O'Hare), first tore into her, Celeste practically fell apart.

Not that the series hasn't given Mary Louise plenty of ammunition against Celeste over the past five episodes, even with the Perry's death issue. The Ambien incidents have been singularly unfortunate, both with Celeste sleep-driving and then apparently with picking up a dude and randomly bringing him home. Her lies about it haven't been convincing in the slightest either, only digging the hole deeper. Meanwhile, audiences may have digested the horror of what Perry did, and accepted Ziggy, Josh, and Max as half-brothers, a court is going to look at this ugly and complicated triangle and see it far differently, a fact Mary Louise's side took full advantage of.

But Celeste wasn't going down that quickly. She was, after all, once a lawyer herself, and after what she went through on the stand, it was like she found her long-absent backbone.

Big Little Lies' penultimate episode ended not with a judgment against Celeste, but a power move on her part. (One that took her lawyer aback.) Recognizing she was about to lose the case, Celeste stood up and demanded that Mary Louise be subjected to the same grilling. After all, this was about which one of them was more fit to be a mother to her children. If Celeste had to undergo a complete flaying of her soul to keep her children, then her mother-in-law deserved to suffer the same forensic analysis to prove she earned them.

For fans, this was the moment everyone has been waiting for. Mary Louise, on the stand, under oath, being forced to answer how Perry became the abusive creature he was, and what happened to his brother Raymond. And the best part? Celeste will be the one asking the questions.

More like this
These Theories About The 'This Is Us' Series Finale May Predict How It'll End
By Ani Bundel
When Will 'Riverdale' Season 5 Return In 2021? Its Mid-Season Break Is Long AF
By Rachel Varina
How Many Episodes Will 'Cruel Summer' Season 1 Have? Fans Need Answers
By Rachel Varina
Stay up to date