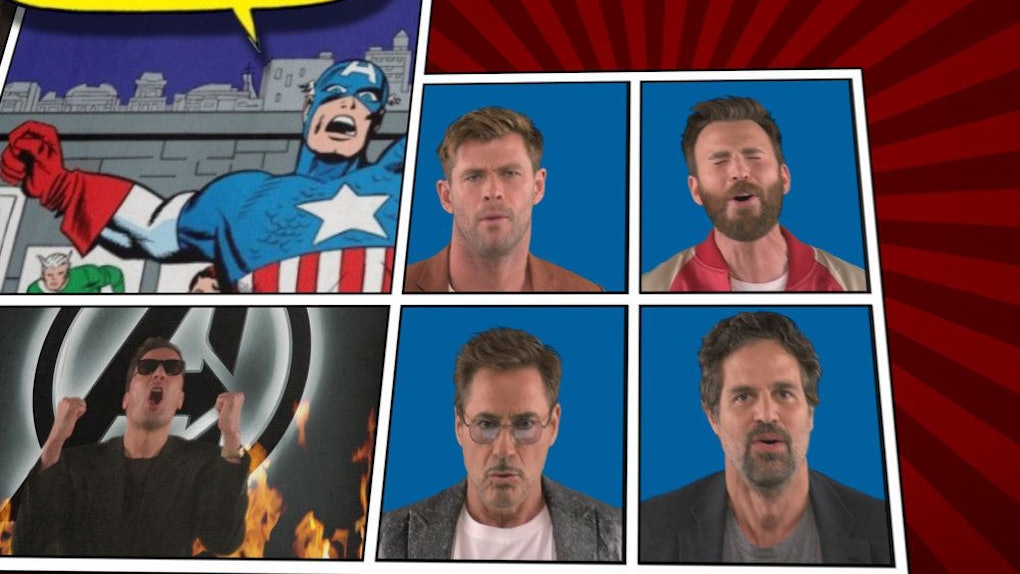 Avengers: Endgame, one of the most highly anticipated movies of 2019, is nearly here. April 22 saw the red carpet premiere in Los Angeles, putting the entire cast in one place on the West Coast. But that doesn't mean they couldn't still do late night appearances, even though they were on the wrong side of the country from where most of them film in New York City. Over on The Tonight Show with Jimmy Fallon, the late-night host celebrated the beginning of "Endgame Week" with The Avengers' "We Didn't Start The Fire" sing-along.

While most of Fallon's competitors are known for their political humor, Fallon has always worked hard to shy away from such things. (Sometimes a little too hard, as his ratings can attest.) If Fallon's reign at The Tonight Show will be remembered for anything, it's his savvy decision to hire The Roots as his house band, and the musical flexibility this gave him. From pop songs played on kiddie instruments, to parody songs, music has been the show's strong suit since Fallon took over.

It should, therefore, surprise no one that the Avengers' cast pre-taped spot was a "Marvel-ized" version of a 1980s classic pop tune, "We Didn't Start The Fire."

With Jimmy Fallon sitting at the table pounding out the rhythm as the flame burn behind him Billy Joel-style, the main cast of Avengers: Endgame, including Robert Downey Jr, Chris Hemsworth, Mark Ruffalo, Jeremy Renner, and Chris Evans recite all the highlights of the first three phases of the Marvel Cinematic Universe. Downey and Evans manage to carry the tune pretty well between them, but the key is far too high for Hemsworth's baritone, and Fallon has to kind of carry that bit.

The clips, which really do cover all 21 movies, are all presented comic book panel style. Note that even the Edward Norton The Incredible Hulk makes an appearance, even though it's Ruffalo singing over it. Also, most of the Phase II sequels, some of the weakest in the Marvel lineup, are mostly defined by their villains rather than their heroes. Bonus if you recognize which villain goes with which film.

Also making cameo appearances: Paul Rudd, Don Cheadle, Brie Larson, Danai Gurira, and Karen Gillan, the last of whom is carrying it for the whole Guardians team. (They do work in an "I am Groot" clip though.)

And then the whole thing turns into a Stan Lee tribute, because, you know, everyone needed to cry today.

While this might not be the deepest dive into the 59 hours' worth of movies that came before Endgame, in terms of a two-minute brush up over which characters arrived and in what order, one could do worst. And besides, it's worth it to see Evan get really into singing the song, and Hemsworth beaming at the mention of Loki.

Avengers: Endgame will arrive in theaters on Friday, April 26, 2019, with some theaters staying open around the clock all weekend to accommodate the demand for tickets.