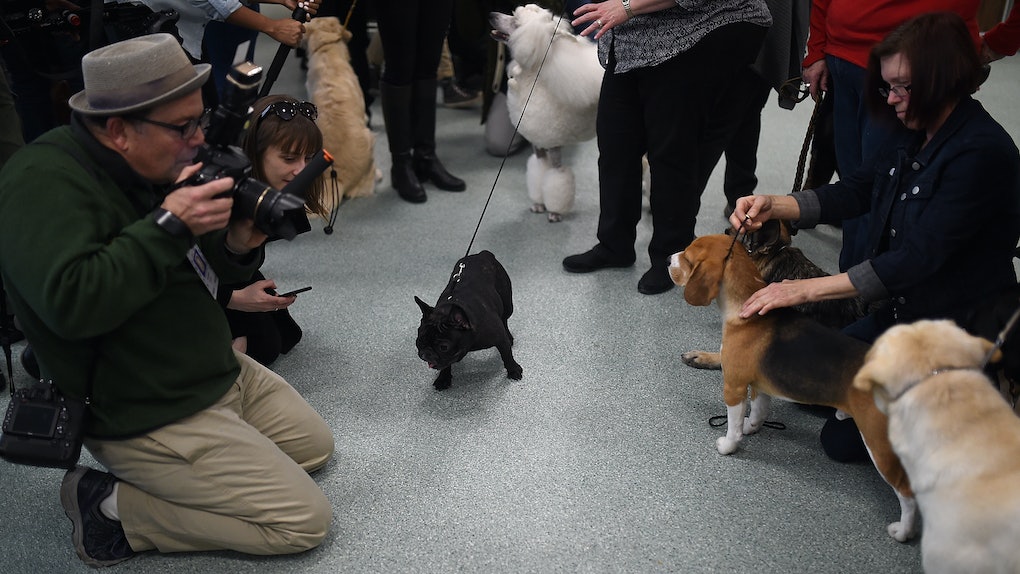 The AKC Added The Nederlandse Kooikerhondje & Grand Basset Griffon Vendeen, & They're Too Cute

New year, new dog breeds? We're just a little over a week into 2018 and it's safe to say this year is already off to a good start. As of Jan. 10, the American Kennel Club (AKC) added two dog breeds to its official roster, and we're totally squealing at the cuteness.

The AKC surprised Twitter this morning with their announcement of the upcoming dog additions, and officially introduced the two breeds, the Nederlandse Kooikerhondje & the Grand Basset Griffon Vendéen, via Facebook Live at 11 a.m. ET. This brings the total number of AKC-recognized dog breeds to 192. While the announcement of these new breeds occurred on the morning of Jan. 10, the dynamic duo are already eligible to compete in their respective categories as of Jan. 1 2018 — but won't be able to compete in the famed Westminster dog show until next year. Awww.

While the names may be a bit much, there's nothing complicated at how cute that face is. I'm crying.

The Nederlandse Kooikerhondje (try saying that 10 times fast) is in the Spaniel family, where its Dutch origins and background as a prime duck hunting dog will secure its spot in the Sporting category. The AKC has described Nederlandse Kooikerhondjes as "energetic, friendly and alert dogs that are ready for work with a moderate activity level, needing regular mental and physical activity to be happy."

Known for being a favorite of Dutch nobility, the breed is rare outside of Europe. There are an estimated 7,000 Kooikerhondjes worldwide with an estimated 500 currently held in the United States.

And we haven't even gotten into adorableness of the GBGV.

I don't care if that fur is bound to cover all of my furniture, those faces are worth it. Look. At. This. Fluff. I'm crying again.

The Grand Basset Griffon Vendéen, or GBGV for short, originates from France and despite its short, low to the ground, frame is full of stamina and a well recognized rabbit hunting dog. This breed will join its fellow basset in the Hound group. According to the AKC, the GBGV is "a laidback, intelligent, friendly pack hound that gets along well with other dogs that are courageous and passionate workers with a high activity level." In order to satiate those extreme activity levels, the Grand Basset Griffon Vendéen needs "daily vigorous exercise." Just a warning in case you're planning on adopting one for your studio apartment.

These two are the latest breeds to be recognized by the AKC, after the American Hairless Terrier, Pumi, and Sloughi were added in 2016. With recognition, the breeds will be able to compete in as many as 22,000 AKC affiliated events and clubs each year. To be recognized by the AKC is the "creme de la creme," so to speak, for dog breeders across the country.

The AKC is the nation's oldest purebred dog registry, where its 192 recognized breeds range from the likes of the non-sporting English Bulldogs to the Herding Bouvier Des Flandres. However, these pups don't just need cute looks to be recognized by the AKC, instead there's actually quite the process behind registration process. In order to be recognized, there must be at least 300 of the specific breed among 20 states across America. Once the number has been achieved, individuals must petition for the breed to be recognized, which can take years of building up social clubs and pedigrees in order to fall within the AKC standards.

However there is also a dark side to this very cute tale. The American Kennel Club has drawn criticism from animal advocacy groups, such as PETA, who say that emphasizing purebred dogs not only strengthens puppy mills but also distracts individuals from mixed-breed dogs, thus decreasing the chance of shelter dogs being adopted. The AKC has rebutted such claims by stating breeding dogs allows owners to choose predictable characteristics, which will result in longer-lasting relationships.

I don't know about you, but I can't wait to watch these pups strut their stuff at the next dog show next year. After all, puppies are great no matter where they're from.