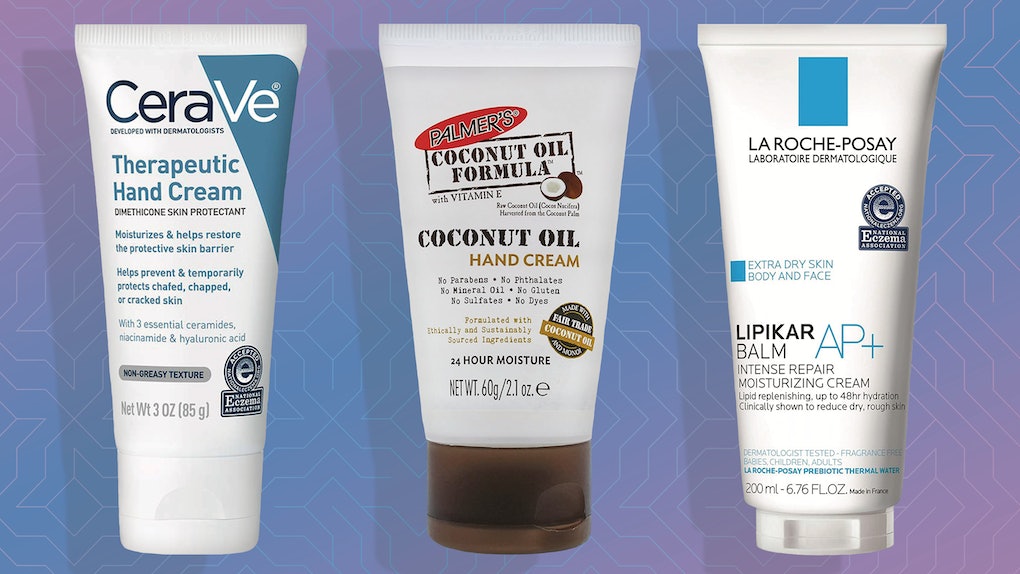 I love a fancy-pants hand cream as much as the next Le Labo acolyte, but those fancy-pants hand creams do literally nothing to treat my perennially dry, chapped hands — and if you’ve found your way to this article, I’m guessing you’re in this quagmire with me. To get ourselves out of it, I spoke with Dr. Erin Gilbert, Vichy Consultant and board-certified dermatologist, about what constitutes the best hand creams for cracked hands. Unsurprisingly, Dr. Gilbert suggests nixing those luxury, small-batch lotions for a heavy-duty drugstore hand cream, as larger companies “have invested a lot in research and development, and they work.” And they’re formulated with the (admittedly less sexy) ingredients that are most effective at healing and protecting hands with cracks and blisters, like petrolatum, ceramides, glycerin, shea butter, oils, paraffins, dimethicone, and water — all of which work to restore and protect your skin’s moisture barrier.

For cracked skin in particular, Dr. Gilbert suggests opting for thick formulas that are free of drying agents like alcohols, harsh detergents, and cleansing agents, as well as acids (which are typically used as exfoliants, or for smoothing callouses), since they can sting open cracks. Another hack: Look for a hand cream that’s been approved by the National Eczema Association, which ensures that the formula is both effective and safe enough for more severe forms of dryness.

For best results, you should be applying your hand cream of choice every time you wash your hands, and before bed. Dr. Gilbert also recommends slipping on a pair of white cotton gloves before bed. This has a few benefits: It supercharges your hand cream’s moisturizing and healing properties; it protects your sheets from greasy residue; and it puts you in touch with your inner elegant grandmother.

Save your skin (and your cash) with any of the seven best hand creams for cracked hands featured ahead — all of which cost $15 or less on Amazon.

We only recommend products we love and that we think you will, too. We may receive a portion of sales from products purchased from this article, which was written by our Commerce team.

Dr. Gilbert favors this Vichy Ultra-Nourishing Hand Cream for treating severely dry and/or cracked hands. “It’s made with shea butter, allantoin, and Vichy 15 Mineral-Rich Volcanic Water to strengthen the skin barrier, leaving it soft and nourished with moisture,” she says. It also features three more of Dr. Gilbert’s recommended ingredients — glycerin, petrolatum, and dimethicone — which work together to attract and seal in moisture. Amazon reviewers love it just as much as Dr. Gilbert does: One reported that it’s thick enough “to cover every nook and cranny” (a supremely satisfying image); and although it doesn’t dry down completely, pretty much everyone says it doesn’t feel greasy or sticky. This contains some added fragrance, so skip it if you’re sensitive to scents.

This O’Keeffe’s hand cream was originally created by a pharmacist for her father, who was a rancher and a diabetic, so all the ingredients in here — including glycerin, paraffin, and allantoin — are specifically formulated to soften, heal, and seal the most cracked, blistered hands. And almost 17,000 Amazon users have given this a perfect five-star rating, which would launch it directly into Amazon’s (hypothetical) Product Hall of Fame. People with more extreme forms of dryness or skin conditions confirm that this a “miracle worker," too. One person with a skin condition that causes severe blisters and cracking reported that this is the only hand cream that alleviates their symptoms, and another wrote that it worked even better than the prescription hand creams they’ve tried. Diehards will be pleased to know it's sold in multipacks of up to 12.

Ointments are thicker and contain less water than creams, Dr. Gilbert says, so they’re inherently well-suited for cracked hands; and some, like this one from Aquaphor, are specifically labeled as such. This works by creating a protective barrier over vulnerable skin, which shuts out oxygen and other irritants so cracks can heal faster. It’s also one of the rare Amazon products that’s landed a five-star average rating — out of almost 18,000 ratings, no less. Reviewers with extreme and sensitive forms of dryness rave about this too, including people recovering from surgery and those experiencing dry skin as a side effect of chemotherapy. Of course, Aquaphor has tons of other uses, too — you can use it to heal chapped lips and fresh tattoos, for example.

Heavy-duty hand creams are often lacking in the smell category: Unscented, they’re clinical; scented, they’re cloying. Which makes this Palmer’s Coconut Oil Formula Hand Cream a welcome addition to the fold. It smells like coconut, obviously. And Palmer’s is not messing around on the coconut front: It appears here in oil, water, and extract form, along with other skin-softeners like cocoa seed butter, dimethicone, vitamin E, and tons of plant-based oils. Some added fragrance boosts the scent, which reviewers note isn't overly sweet. More importantly, it gets excellent reviews from people with super dry skin. A nurse who works in a hospital (i.e. the most frequent of frequent hand washers) gives this the seal of approval, as does a cook who says this alleviates the painful, deep cracks in their fingertips.

I’m willing to bet $9 that the skin on the rest of your body is also dry. Which happens to be the price of this big, 16.9-ounce bottle of Eucerin lotion! Even though it’s called a lotion, which Dr. Gilbert warned against since they're diluted with water, this is the most concentrated formula that Eucerin offers. I can confirm this drugstore classic feels more like a pleasantly thick, rich cream than a runny (read: useless) lotion. This contains lactic acid, an AHA that sweeps away dead cells on your skin’s surface, so it’s an especially good choice if your skin tends to get flaky. Although it contains a chemical exfoliant (which Dr. Gilbert also recommends against), I can also confirm that this never feels stingy on my chapped hands — in fact, it feels instantly soothing. It blends in nicely, considering how rich it is, though it feels a little tacky for a few minutes. I’d recommend slathering this on at night, since putting on clothes immediately after application is a mildly unpleasant experience.

That hardcore Eucerin cream is my go-to for full-body application, but if we’re talking hands-only, this La Roche-Posay cream is the hands-down (lol, sorry) winner. I would even go so far as to say it’s the only OTC hand cream that’s worked to nourish and heal my severely dry, occasionally chapped hands — both immediately and over time. (I’ve tried prescription-strength hand creams, for some context about just how severe we’re talking.) It does leave a bit of an oily sheen behind, though not so much that I can’t type/scroll/open jars right after I apply it. And it’s super safe for people with sensitive skin to use — including on your face, if you’re so inclined — since it’s allergy-tested, fragrance-free, and accepted by the National Eczema Association. This happens to be another of Dr. Gilbert’s recommendations, if you don’t just want to take my word for it.

7. Another Top-Rated Hand Cream To Consider

CeraVe is another foolproof brand, but this highly rated therapeutic hand cream in particular is their best choice for treating cracked skin. In here, a blend of ceramides, hyaluronic acid, and dimethicone work together to attract moisture, lock it in, and protect and restore your skin's protective barrier for both instant and long-term relief. Lots of reviewers with psoriasis and eczema swear by this (which also gets the seal of approval from the National Eczema Association). Others like that it has a lighter, more fluid consistency than other intensive hand creams, which can get a little kindergarten paste-esque.