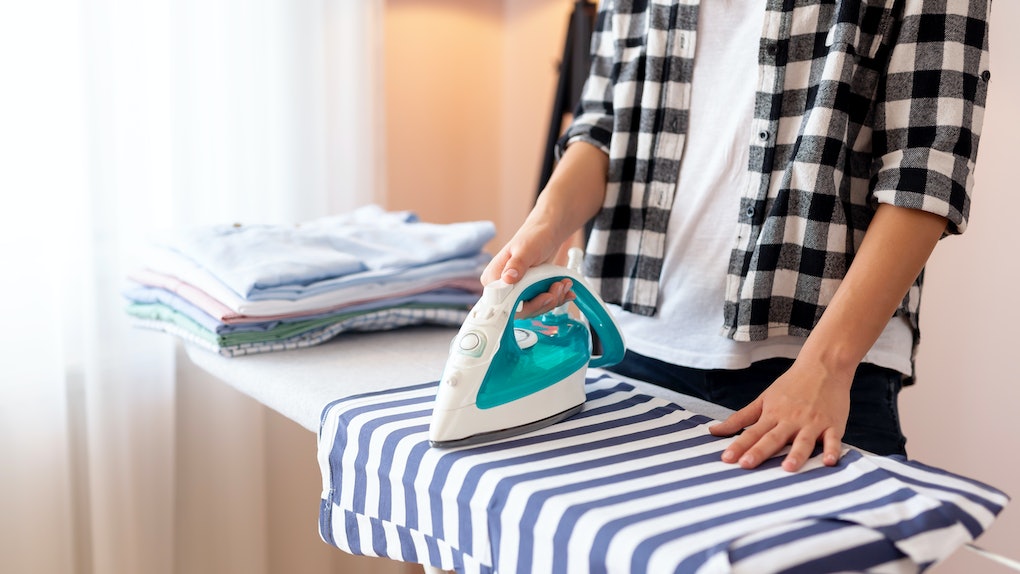 When your wrinkled clothes need smoothing, the best cheap irons can refresh them — for $40 or less. Affordable irons won’t necessarily have all the bells and whistles of costlier models, but steam irons that have at least 1,200 watts can be effective. Any iron you pick should also have stainless steel or ceramic soleplates, as these tend to glide easily, and should offer all the fabric settings that you need.

While dry irons (which don’t produce steam) are usually cheaper, steam irons are more versatile for a variety of ironing projects and fabrics, typically making them a better pick. Some models produce steam when the model is upright, also known as vertical steaming, which could be convenient for refreshing hanging garments or for particularly delicate or wrinkle-prone items like linen or silk. For conventional use on an ironing board, look for models that have multiple steam settings.

Longer cords can be convenient for irons, and most of the picks below have cords that are at least 8 feet in length. But if you’re left-handed or don’t want to feel tethered to an outlet, you might be interested in a cordless option. And, if you want a travel-ready option, consider a small dual-voltage model that’s designed for international use. Other useful features to consider when choosing an affordable iron include an auto shut-off setting for safety and self-cleaning settings. When it comes time to refill your water tank, know that a tank with a capacity of 10 ounces (or higher) won't need refills as often as a smaller one.

I’ve put together a list of the best cheap irons that can keep your garments crisp and wrinkle free — without breaking the bank.

We only recommend products we love and that we think you will, too. We may receive a portion of sales from products purchased from this article, which was written by our Commerce team.

Despite costing less than $25, this 1,800-watt steam iron offers power that rivals more expensive models. It's built with a dual-plate ceramic soleplate, which the manufacturer claims reduces ironing time by about 30% compared to single-plate models. Other highlights of this budget-friendly iron with over 1,200 Amazon reviews and an overall 4.5-star rating include a spacious 11.8-ounce water tank that won't require constant refilling, a long 8-foot cord, anti-drip and self-cleaning settings, and an anti-calcium feature to reduce water tank buildup. This iron also comes with five temperature control presets for nylon, silk, wool, cotton, and linen and three-way automatic shut-off (after 8 minutes in vertical position, and after 30 seconds when facing down or tipped over).

According to one Amazon reviewer: “This iron is great! It easily takes out wrinkles with one swipe, leaves no drippy mess and heats up quickly. It also has a nice safety feature should you forget to turn it off after use. Highly recommend!!”

2. A Popular Iron With A Retractable Cord

This popular iron with a retractable cord has garnered more than 10,000 reviews and a 4.6-star overall rating on Amazon. In addition to a handy 8-foot cord that retracts for simple storage, this 1,400-watt iron comes with a stainless steel soleplate and multiple steam settings, as well as mist and puff button options and temperature controls based on fabric. It can also steam vertically or dry iron without steam (just know the tank holds a little over 7 ounces, so may need to refill more often). The automatic shut-off feature offers protection if the iron is left idle in three directions (upright, facing down, or facing up), and the easy-fill opening, plus self-cleaning and anti-drip features, also simplify use and maintenance.

According to one Amazon reviewer: “It heats up almost instantly, it's not too heavy, has nice steam, and has an easy fabric selection dial. I saw all the raves about the self-contained retractable cord, and didn't think that was a huge deal, but the retractable cord is a great feature. Not only easy, but nice safety feature as well. No worrying about catching the cord and knocking over a hot iron, or wrapping the cord around a still-hot iron. It's seriously pretty fantastic. This is a great iron for a great price."

3. A Compact Iron That Heats Up In Less Than 1 Minute

This fast-heating iron with over 5,000 Amazon reviews and a 4.5-star overall rating can help you refresh a wrinkled garment when you're in a time crunch. This Maytag steam iron has a capable 1,500-watt, a stainless steel soleplate, and requires just 55 seconds to heat up completely. This iron features an 8-foot cord and multiple steam and temperature settings, though there aren’t specific indicators/temperature suggestions by fabric type. You can also use this in vertical steaming mode for clothing on hangers. While the 10-ounce tank is generous, it’s not transparent, which means you can’t really tell how much water is left. But an added bonus is that the compact build (which is smaller than the other non-travel irons on this list, save for the travel iron) with a built-in stand offers more stability when the iron is upright. That's one less thing to worry about when you're ironing in a hurry.

Choose between a few different colors.

According to one Amazon reviewer: “I absolutely love this iron. It heats quickly [and] it gives a little click when the heat is up to temperature, and I like the styling. The steam adjustment is great, and the steam function is powerful. I use this iron a lot for sewing projects, and it performs effortlessly.”

If you're looking for a powerful steam iron backed by a lot of reviews, this PurSteam iron is a best-seller on Amazon, with more than 19,000 reviews and 4.6-star overall rating. This 1,700-watt model is built with a versatile stainless steel soleplate that glides smoothly over all sorts of fabrics. The manufacturer also claims that the steam distribution (which is 55 grams per minute) is ideal for crafts such as sewing and quilting.

There are a number of presets that are controlled by a dial opposite the handle and steam output changes based on the setting. It's also usable as as a vertical steamer and has a steam button that emits a powerful burst of steam when desired. There are no specific details from the manufacturer about the tank size, but several Amazon reviewers confirm that it is large. One reviewer estimates that it takes about three to four trips with the 200-milliliter cup that comes with the iron in order to fill it. Other great features that will make your life easier include a self-cleaning setting with an anti-calcium buildup feature, auto shut-off, an anti-drip system, and a long 8-foot cord. This product is also supported by a 2-year warranty.

According to one Amazon reviewer: “It wasn't until I got an office job that I started ironing again. Now, I iron everything including t-shirts and sometimes even jeans. A little steam goes a long way and looks so much more polished!!! The sleek design is impressive, it even had a nice amount of weight [well made, high quality] and gives me confidence to iron almost anything including silk or lightweight tops. [...] This could be my favorite new item--never thought it would be an iron.”

You'll never have to worry about wrinkled clothing on vacation with this compact travel steam iron, which is well received on Amazon with over 1,800 reviews and a 4.4-star overall rating. The iron is great for international travel since it works with both 120- and 240-volt outlets, and it should be a breeze to pack, thanks to the included carrying pouch, fold-flat handle, and super-light 1.5-pound build. Compact steam irons like the Maytag M200 may be small and light, but this travel-specific iron is even smaller and lighter.

While the 1,000-watt iron lags slightly behind our general 1,200-watt recommendation, the iron (which has a stainless steel soleplate) is much more powerful than many travel irons out there. It also delivers an impressive steam output of 100 grams per minute, and that's double what many standard-size irons offer. This iron also has a 2-ounce transparent water tank for easy water level monitoring, offers variable temperatures based on fabric and steam output (consistent stream or bursts), and works in vertical steam mode.

According to one Amazon reviewer: “I absolutely love this mini iron [...] compared to other mini irons I’ve tried this one is by far the best. Very small footprint, I actually purchased this for my sewing needs but I’ve ended up using it on more and more it gets super hot[.] [A]t 1000 watts it’s the most powerful mini iron on the market [...] and puts out the steam just as good as my full size iron and doesn’t drip.”