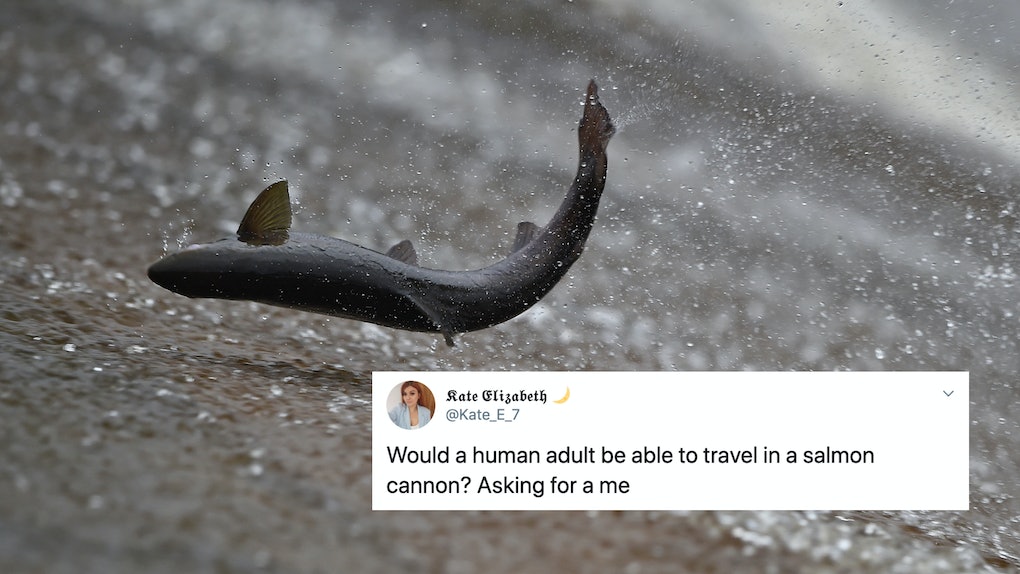 Some days you get on the internet with no idea what to expect, and the internet gifts you with with a total gem. That's what happened when I logged onto Twitter earlier this week and found something called the "salmon cannon," which basically appears to be a high-speed transportation system for salmon. The 16 funniest tweets about the salmon cannon all comment on how absurd (and cool) the contraption is, which, TBH, is what we're all thinking, right?

First, some background about the salmon cannon and what the heck it actually does. The salmon cannon is a device that was built to shoot fish over hydroelectric dams that otherwise block their natural migratory patterns, which require them to move upstream to spawn. The salmon cannon aims to speedily help the fish get to where they need to be — and when I say speedy, I mean speedy. According to USA Today, the cannon launches fish at a rate of 25 feet per second, which equals out to be around 40 fish per minute and 57,600 fish per day. It's a pretty sweet deal for the fish, who get to take a high-speed ride to their final destination without a high chance of injury.

Because of how silly it looks and because the concept of the salmon cannon in and of itself is pretty funny, people on Twitter are losing it over this LOL-inducing contraption.

A lot of people commented on how badly they wanted to ride in the salmon cannon, like Twitter user @Kate_E_7 who wrote, "Would a human adult be able to travel in a salmon cannon? Asking for a me."

A lot of people made a joke about another recent animal-related Twitter trend, the "30-50 feral hogs" tweet, like Twitter user @CaseyExplosion who wrote, "Have we tried using the salmon cannon to fend against feral hogs?

A lot of people joked about being "salmon cannoned" to another place or time, like Twitter user @not_biden who wrote, "Can I salmon cannon myself into a happier timeline?"

Several people noted that the salmon cannon reminded them of a similar contraption from the animated American sitcom Futurama.

Alhough the salmon cannon is just now gaining more attention on YouTube, the contraption has actually been around for a while. In fact, John Oliver even talked about it during a Last Week Tonight segment from 2014. At the time Oliver praised the contraption, saying, "A cannon that fires fish through a tube and over a dam is absolutely incredible." On Aug. 11, the Last Week Tonight Twitter even shared the segment out, reminding people just learning about the salmon cannon that Oliver covered it five years ago.

Like everyone else on Twitter, I cant help but imagine a future where humans can hop in a salmon cannon-like contraption and travel long distances in just seconds. Until then, you can find me rewatching all the salmon cannon videos.