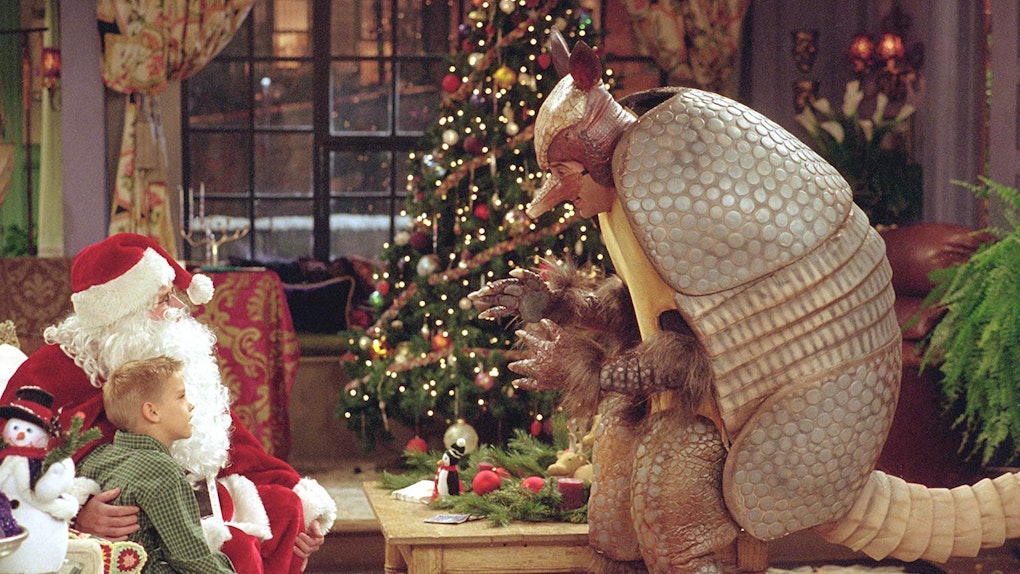 Let's be honest — the Christmas season is ridiculously busy and we never really get enough time to just chill on our own before the holiday haze begins. Time in December is sacred, so when you do have an hour or two to spare, you probably need a dose of Christmas spirit to feel motivated for that office party or caroling with the family. In case you're feeling like a bit of a Scrooge this year, we've narrowed down the 10 best TV Christmas episodes to improve your mood at a dire time.

We can't help it if holiday festivities are draining, so when you can't muster a hearty "ho, ho, ho," try switching on one of these options for a quick Christmas boost. Whether you want to watch an absurd take on a holiday tradition or a heartwarming scene of your favorite characters gathered around the fire, TV's most well-known Christmas episodes are bound to put you in the right mood. If I were you, I'd grab some eggnog, a blanket, and the remote right now.

The selections below come from shows you can easily find on streaming services, but they're obviously only several of a seemingly endless supply of holiday-themed episodes out there. What are some of your seasonal favorites?

When Ross gets to celebrate the holidays with his son (a young Cole Sprouse), he makes it his mission to teach Ben about his Jewish heritage. Being a kid in the 21st century, Ben is a little too preoccupied with visions of Santa dancing in his head to care about the tradition of Hanukkah. Ross's attempt to dress as Santa Claus and explain Hanukkah ends with him in an armadillo costume as he tries to convince Ben that he's Santa's representative for all the Southern states ("And... Mexico!"). Ross hobbling along in his costume is an episode highlight, but the story makes us consider how other winter holidays deserve a prominent spot alongside Christmas.

At this point, Full House's holiday episodes are like the cozy equivalent of a '90s home video. From big family parties to ugly Christmas sweaters, this episode has it all, complete with a festive freeze-frame at the end wishing viewers happy holidays. Before the storybook ending, Becky longs for a snowy Nebraskan Christmas, while DJ and Steve argue about his college plans. Plus, what's a Christmas episode without a few characters dressed in Santa suits? They don't quite make them like this one anymore.

The Season 6 episode "False Positive" is also a great story set during the holiday season, but if you want an explicitly Christmas-themed HIMYM episode, Ted and Lily's fallout over an old voicemail is the way to go. In the message from when Lily and Marshall were broken up earlier that season, Ted calls Lily an unprintable word — a "grinch" in Future Ted's retelling — and prompts her to move all of the Christmas decorations out of their apartment. We all inevitably clash with someone this time of year, but "How Lily Stole Christmas" reminds us there are more important things to consider outside of arguments.

TV is decidedly better at incorporating other religions and backgrounds into its Christmas coverage than, say, the Hallmark Channel, but it partially has this O.C. episode to thank for normalizing Hanukkah inclusion. In it, Seth introduces his blended holiday tradition of Chrismukkah, meant to appease his Christian mother and Jewish father. Being a teen drama, the episode has its fair share of love triangles and poor decisions, but when you're a teenager, isn't Christmas just something that happens in between all of your everyday angst about school or friends?

Christmas is to The Office as Thanksgiving is to Friends. All of the long-running comedy's holiday episodes are enjoyable, but Season 5's "Moroccan Christmas" captures its festive spirit best. In charge of the office Christmas party for the first time, Phyllis plans a Moroccan-themed soiree, while Dwight schemes to sell the year's most popular toy at a ridiculously high price. Staying on track with one of the season's ongoing stories, the episode also covers Angela's affair with Dwight, thereby making it perfectly acceptable for year-round viewing. I'm not the only one watching these Christmas episodes in July, right?

Everything about The West Wing now feels so sweet and heartwarming thanks to modern presidential context, but "In Excelsis Deo" especially stirs up fuzzy feelings. Toby becomes invested in the death of a homeless Korean War veteran when his body is found in a coat Toby donated, while CJ tries to push for more hate crime legislation. Of course, some of the team's struggles in finding the perfect Christmas gifts also come into play. Have tissues ready for this episode's closing scene set to a version of "The Little Drummer Boy," seen above.

Looking back at Glee today, we all know it was far from being brilliant, but its musical choices often set it apart from your typical teen dramedy. Its Season 2 Christmas episode was a prime example, particularly earning praise for its duet of "Baby, It's Cold Outside" between Kurt and Blaine. Besides changing the delivery of an often reviled song for the better, "A Very Glee Christmas" also follows Artie's quest to maintain Brittany's belief in Santa Claus and Sue's Grinch-like interference in the school faculty's Secret Santa exchange. Meanwhile, Rachel and Finn officially break up, but we don't need any sad reminders of Cory Monteith this holiday season.

We can always use a reminder that Christmas is often too commercialized, and watching Dre and Bow try to teach their kids that is a classic Black-ish moment. When Dre finally feels fed up with his family's gift requests, he decides to give each of the kids only one present that Christmas. Black-ish is sometimes reminiscent of the simple family sitcom that was everywhere in the 1990s, and although we've seen this kind of plot dozens of times on TV, it feels entertainingly fresh in "Stuff."

You know the indistinguishable, slightly creepy-looking style of old Christmas specials like Rudolph the Red-Nosed Reindeer and The Little Drummer Boy? Community adopted that classic stop-motion animation for its unique holiday episode in Season 2, using it for Abed's Christmas-themed fantasy that featured the entire study group. It's not for everyone, but if you love this little-discussed element of Christmas, "Abed's Uncontrollable Christmas" should definitely be on your radar this year.

The Christmas special is a staple in British television, and at the peak of its popularity, Downton Abbey finally answered the will-they-won't-they question surrounding Mary and Matthew in its Season 2 holiday episode. Despite its slightly grim preview footage, the episode closes on a festively happy note, which audiences definitely needed after watching Bates on trial and Mary maneuvering through her loveless engagement to the blackmailing Sir Richard. We'll keep spoilers at bay in case you're trying to binge the series before the movie is out next year, but trust that this episode has an ending perfectly suited for Christmas Day.

What holiday specials will you be watching this December?

More like this
15 'Schitt's Creek'-Inspired Mother's Day Cards On Etsy For The Moira In Your Life
By Rachel Chapman
Michelle Obama's Easter 2021 Instagram With Barack Is A Cute Photo Booth Moment
By Daffany Chan
How Many Episodes Will 'This Is Us' Season 5 Have? Only A Few Are Left
By Ani Bundel
Stay up to date