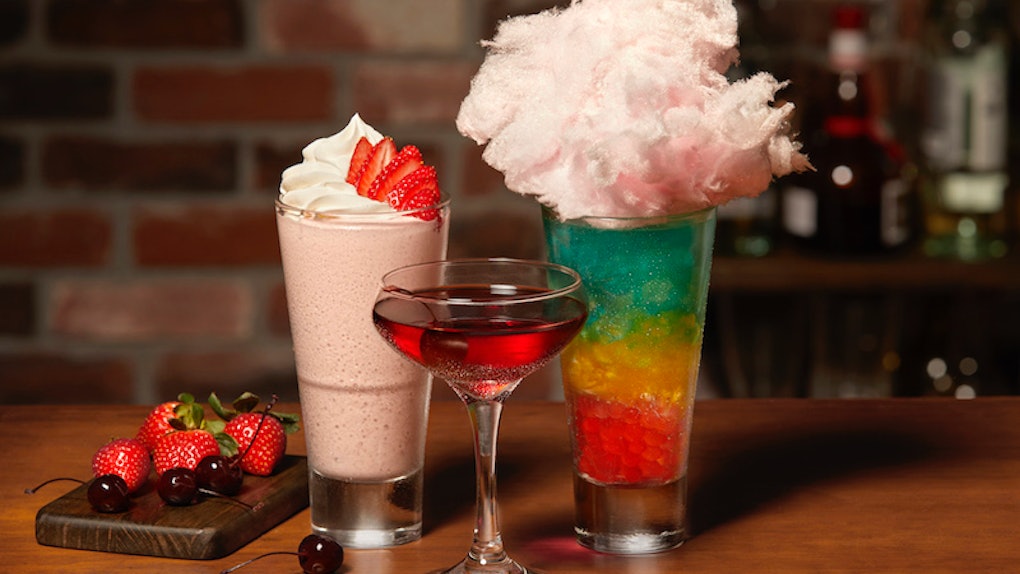 Let's face it: Unicorns aren't going anywhere anytime soon. If you're a fan of rainbow snacks and colorful cocktails, you've probably enjoyed the mystical food and drinks that've been released throughout the past few years. I'm going to assume that you're also happy about all of the unicorn-inspired goodies that've been released so far in 2019. Thankfully, one of your go-to dinner spots just added to the New Year's magic with its latest menu update. More specifically, TGI Fridays' TGIF*IT menu features an Electric Unicorn cocktail, and it proves that the mystical creatures are here to stay.

That's right: Head to TGI Fridays, order the Electric Unicorn, and get your phone out. This drink is gorgeous, guys — and your Instagram grid is basically begging for picture of it. Based off of photos from a recent TGI Fridays press release, the Electric Unicorn features a gradient rainbow body with with a fluffy, pink cotton candy top. In my opinion, it screams "unicorn" — don't you think?

In addition to its technicolor aesthetic, the Electric Unicorn will give you a buzz — and I'm not only talking about an booze-induced one. According to TGI Fridays, the vibrant drink is made with Red Bull to give you the caffeine kick that you might be craving in the new year. Of course, the cocktail also includes alcohol, but the drink's ingredients weren't specified in TGI Fridays' release.

Elite Daily reached out to the restaurant chain and asked what kind of booze is included in the Electric Unicorn, and learned that Absolut Vodka and DeKuyper Blue Curaçao are present in the drink. Other non-alcoholic ingredients in the beverage include Red Bull Yellow Edition, strawberry bursting bubbles, passion fruit, cotton candy, and, of course, shimmer.

If you're participating in #DryJanuary, have no fear. You can still try TGI Fridays' Electric Unicorn, because it's also available as a non-alcoholic option. However, those of you who'd rather down a boozy beverage or two have plenty of new drinks to choose from (if you're over 21 years old, of course). I'm talking about TGI Fridays' new Bordeaux Cherry Manhattan and its Strawberry Shortcake cocktails. Based off of their names, they should definitely add a touch of sweetness to your near year.

Why did TGI Fridays add three cocktails to its menu, anyway? The answer is simple. In honor of 2019, the restaurant created a "TGIF*IT" menu which features sips and snacks for customers who've ditch their New Year's resolutions. According to the company, the Electric Unicorn was made for anyone who's given up caffeine — and the Strawberry Shortcake was inspired by those who've missed sugar. The Bordeaux Cherry Manhattan, on the other hand, was created to give anyone who's given up on #DryJanuary an enjoyable sip.

Cocktails aren't the only additions to TGI Fridays' TGIF*IT menu. In fact, the company added a brand new deal that lets customers indulge in their favorite Fridays food on the cheap. It's called the 2+2+2 Starting at $20 menu, which includes two appetizers, two entrees, and two desserts for only $20. That's a pretty great special, if you ask me.

If you haven't given up on your New Year's resolution yet, more power to you. If you have (or plan on doing so), head to TGI Fridays and indulge in its new offerings.

Editor's note: This post has been updated to include TGI Friday's response to Elite Daily's inquiry regarding the drink's ingredients.

More like this
15 Netflix-Inspired Cocktail Recipes That Are Sip-Worthy & Easy To Make
By Rachel Chapman
How Long Is Pepsi Blue Available? Don't Wait To Sip The Colorful Cola
By Cianna Garrison
Here's Where To Buy Naturdays Pineapple Lemonade Beer To Unleash Your Summer Vibes
By Cianna Garrison
Stay up to date