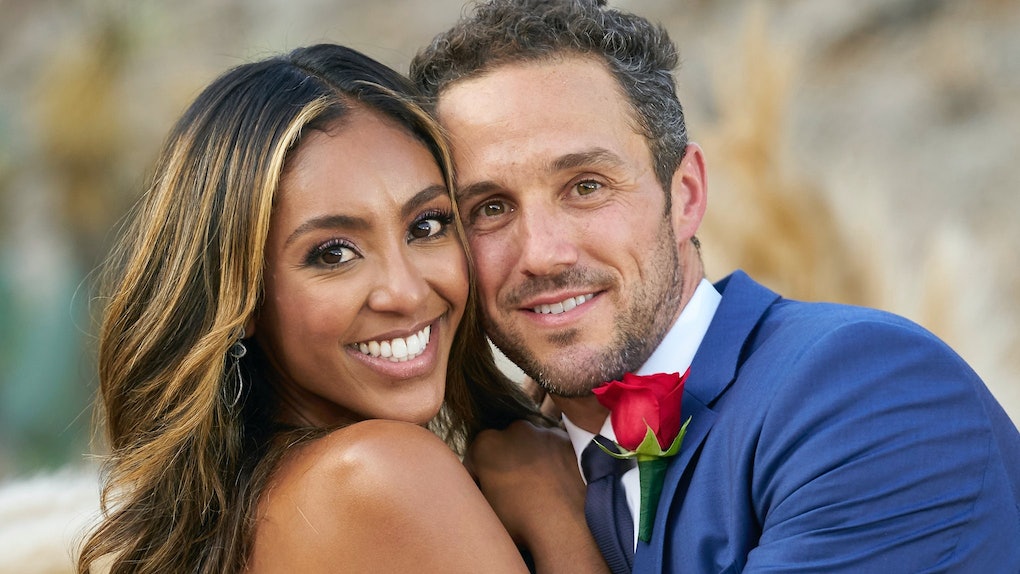 If you're a Bachelor Nation fan, you might think you know everything about this former Bachelorette's journey toward love. But there's one thing the cameras didn't capture —  Tayshia Adams' concern about choosing Zac Clark over Ivan Hall. During a Feb. 24 interview with Marie Claire, Adams opened up about the fear she felt about choosing Clark, who is white, over Hall, who is also biracial (Adams is Black and Mexican; Hall is Black and Filipino). As soon as the show wrapped, Adams told Marie Claire that she and Clark began preparing for the "possible backlash that I didn’t choose someone who looks like me.”

For Clark, part of that process included educating himself about race and racism in America. The desire to do so isn't only to support his fiancée — it's also for their future children. “So, I’m trying to understand and educate myself and talk to [Tayshia] about her experience growing up and what could have helped her and understand that that’s going to be a different experience than I had,” Clark explained. He added, "At the foundation of our relationship is honesty and being able to have those tough conversations. I’ve never dated an African-American. I’ve never dated a Mexican. So, this is all new in some way."

The addiction specialist continued, "But it’s also… like, when she walked in the room, [her race] wasn’t my first thought. My first thought was, Wow, she’s gorgeous, and getting to talk to her and getting to know her, I was attracted to a lot of things, one of which is the ability to have these types of conversations.”

Adams sees her relationship with Clark as an opportunity to be an example of multiracial love. "Being in a mixed relationship with someone that has never dated anybody of color before and sharing that experience, I would never shy away from opportunities like that," she shared. That said, she's not trying to convince anyone that they have some sort of fairytale romance. In fact, despite having moved to New York to be with Clark, she's chosen to keep her home in California "for peace of mind" in case things go south.

“It’s not my first rodeo," she said of her decision to keep her California pad. Adams explained that, when she first separated from her ex-husband Josh Bourelle in 2017, she wound up having to move back in with her parents because she didn't have a place of her own. “I think that’s followed me,” she said, noting that she knows fans will probably perceive what she's saying "as a setback or like, ‘OK, so you guys clearly aren’t doing well.’” But Adams doesn't see it as a setback at all. In fact, she said she chooses to view the safety net as her "considering this like an adult and trying to set it up for the most success I can.”

As for when they'll actually make their way down the aisle, the pair seem to be all over the place. “At first, Zac was the person to be like, ‘We could get married next week.’ And I was like, ‘Slow your roll.’ I’d love to date a year," she told Marie Claire. "And now I’m like, ‘You want to … maybe next month?’ And he’s like, ‘Tayshia, slow your roll.’ We’re back and forth. But there’s no timeline. It’s definitely going to happen. I just don’t know when.”

Here's to hoping they're able to say "I do" whenever they truly feel ready, whether it be next week or next year.