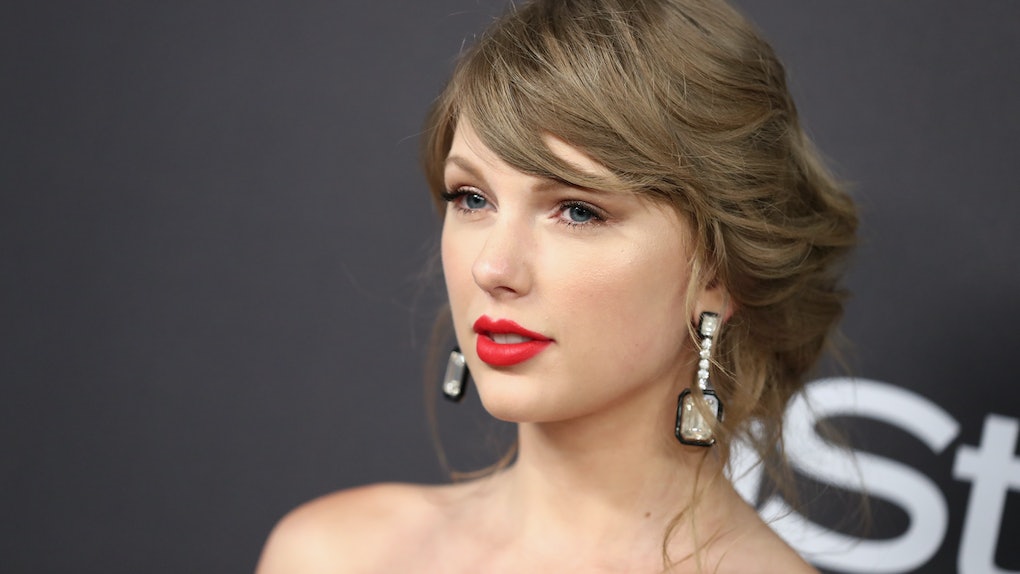 Taylor Swift is Elle's April cover star, and for the magazine, the singer-songwriter wrote about the 30 life lessons she's learned before her upcoming 30th birthday on Dec. 13. Her thoughts range from politics to friendship, but Taylor Swift's quotes about love are what caught my attention the most. I mean, yes, obviously we're all going to be paying attention to what the queen of love songs has to say about love. But her quotes in this particular essay make it seem as though her bond with Joe Alwyn is rock solid.

No, she never mentions him by name. And no, she doesn't even casually reference her current relationship or use the word "boyfriend." But it seems as though, in general, her outlook on love and relationships has majorly evolved since her "We Are Never Ever Getting Back Together" (shoutout to Jake Gyllenhaal), "Dear John," (shoutout to John Mayer) and "I Knew You Were Trouble" (shoutout to Harry Styles) days. No, now, it seems like Swift has traded in her dramatic flings with A-list exes for a more stable, secure relationship with someone who seems to support her for who she really is.

Check out everything she's shared about dating, relationships, and the healthy way to fight here:

She recommends taking your time to get to know someone.

Swift's writes, "Before you jump in headfirst, maybe, I don’t know...get to know someone!"

She discusses the importance of meeting someone who's really in it for the long haul. "All that glitters isn’t gold, and first impressions actually aren’t everything," she continues. "It’s impressive when someone can charm people instantly and own the room, but what I know now to be more valuable about a person is not their charming routine upon meeting them (I call it a 'solid first 15'), but the layers of a person you discover in time. Are they honest, self-aware, and slyly funny at the moments you least expect it? Do they show up for you when you need them? Do they still love you after they’ve seen you broken? Or after they’ve walked in on you having a full conversation with your cats as if they’re people? These are things a first impression could never convey."

She says you don't have to play games when it comes to true love.

"Playing mind games is for the chase," she writes. And "the chase" is something she doesn't think needs to happen in the context of a "real relationship."

"In a real relationship or friendship, you’re shooting yourself in the foot if you don’t tell the other person how you feel, and what could be done to fix it," she writes. "No one is a mind reader. If someone really loves you, they want you to verbalize how you feel. This is real life, not chess."

She has tips for fighting fairly.

She explains what she's learned about the art of fighting fair. "Chances are you’re not trying to hurt the person you love and they aren’t trying to hurt you," she writes. "If you can wind the tension of an argument down to a conversation about where the other person is coming from, there’s a greater chance you can remove the shame of losing a fight for one of you and the ego boost of the one who 'won' the fight. I know a couple who, in the thick of a fight, say 'Hey, same team.' Find a way to defuse the anger that can spiral out of control and make you lose sight of the good things you two have built. They don’t give out awards for winning the most fights in your relationship. They just give out divorce papers."

She says the words 'I'm sorry' are the key to a good relationship.

Swift writes, "Apologizing when you have hurt someone who really matters to you takes nothing away from you."

And, yes, this lesson even applies to her relationship. "Even if it was unintentional, it’s so easy to just apologize and move on," she says. "Try not to say 'I’m sorry, but...' and make excuses for yourself. Learn how to make a sincere apology, and you can avoid breaking down the trust in your friendships and relationships."

Alwyn may be a low-key guy but he's the perfect low-key match for Swift.