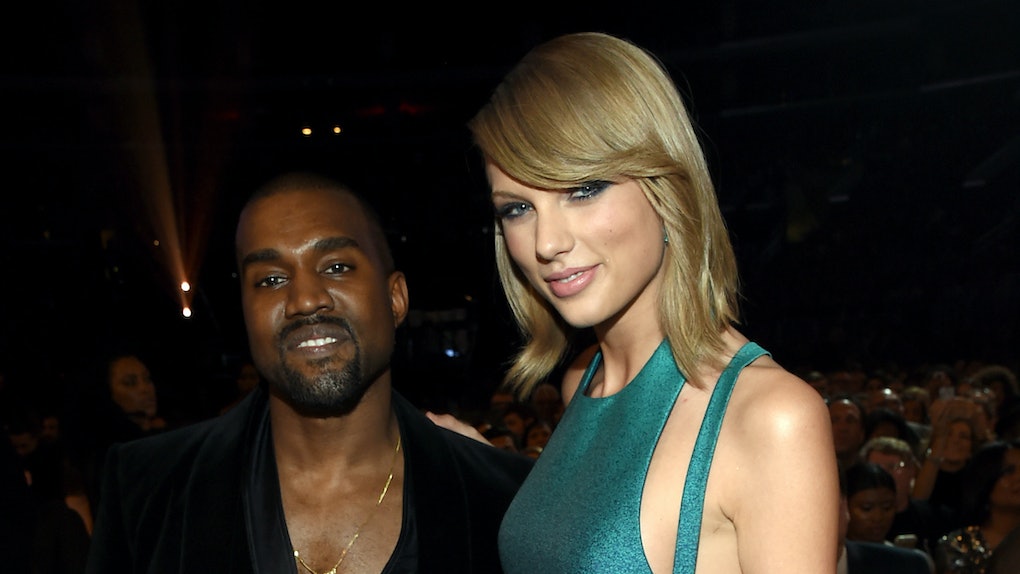 If you thought we were finally done discussing the whole Taylor Swift-Kanye West drama that started back in 2009 when 'Ye rushed the MTV Video Music Awards stage and hijacked Swift's acceptance speech, I'm sorry to say you were wrong. So, so wrong. See, the "Daylight" singer did a cover story for the October 2019 issue of Rolling Stone, and in it, she dropped some major truth bombs about her relationship with West and what really happened during that infamous 2016 phone call. You know, the one Kim Kardashian later posted snippets of on Snapchat? Taylor Swift's quotes about her feud with Kanye West are actually so revealing. I mean, she totally called him two-faced, y'all!

But more on that in a sec. First, a quick refresher: In February 2016, Kanye released "Famous," a song that had the lyric "I feel like me and Taylor might still have sex/Why? I made that b*tch famous."

Swift freaked out over the whole "I made that b*tch famous" part and claimed she never gave West permission to call her the B-word. Enter Kardashian, who decided to hit up Snapchat and post a bunch of seemingly incriminating (but admittedly choppy) videos of Swift seemingly doing just that.

I still don't get why Kardashian filmed this whole convo, but it definitely wasn't a good look for Swift, who got dragged on social media for trying to play the victim.

Now, in her Rolling Stone interview, Swift has finally decided to set the record straight by telling fans her side of the phone call story. Or rather, give more context surrounding the phone call.

"The world didn’t understand the context and the events that led up to it," she told the publication. "Because nothing ever just happens like that without some lead-up. Some events took place to cause me to be p*ssed off when he called me a b*tch."

"I started to feel like we reconnected, which felt great for me," Swift continued. "Because all I ever wanted my whole career after that thing happened in 2009 was for him to respect me. I just so badly wanted that respect from him, and I hate that about myself. But that’s where I was. And so we’d go to dinner and stuff. And I was so happy, because he would say really nice things about my music. It just felt like I was healing some childhood rejection or something from when I was 19."

Then the 2015 VMAs came around. West was getting the Vanguard Award, and he asked Swift to present it to him.

"He called me up, maybe a week or so before the event, and we had maybe over an hourlong conversation, and he’s like, 'I really, really would like for you to present this Vanguard Award to me, this would mean so much to me,'" Swift recalled. "I was so stoked that he asked me that. And so I wrote this speech up, and then we get to the VMAs and I make this speech and he screams, 'MTV got Taylor Swift up here to present me this award for ratings!' And I’m standing in the audience with my arm around his wife, and this chill ran through my body. I realized he is so two-faced. That he wants to be nice to me behind the scenes, but then he wants to look cool, get up in front of everyone and talk sh*t."

"I was so upset," Swift continued. "He wanted me to come talk to him after the event in his dressing room. I wouldn’t go. So then he sent this big, big thing of flowers the next day to apologize. And I was like, 'You know what? I really don’t want us to be on bad terms again. So whatever, I’m just going to move past this.'"

And that, fam, was Swift's apparent state of mind when she got the infamous phone call from West asking for permission to use the line, "I feel like me and Taylor might still have sex."

"I was so touched that he would be respectful and, like, tell me about this one line in the song," Swift told Rolling Stone. "And I was like, 'OK, good. We’re back on good terms.' And then when I heard the song, I was like, 'I’m done with this. If you want to be on bad terms, let’s be on bad terms, but just be real about it.'"

I know, I know — it's a lot to take in. It's pretty eye-opening to get the full picture of Swift's state of mind during that time.