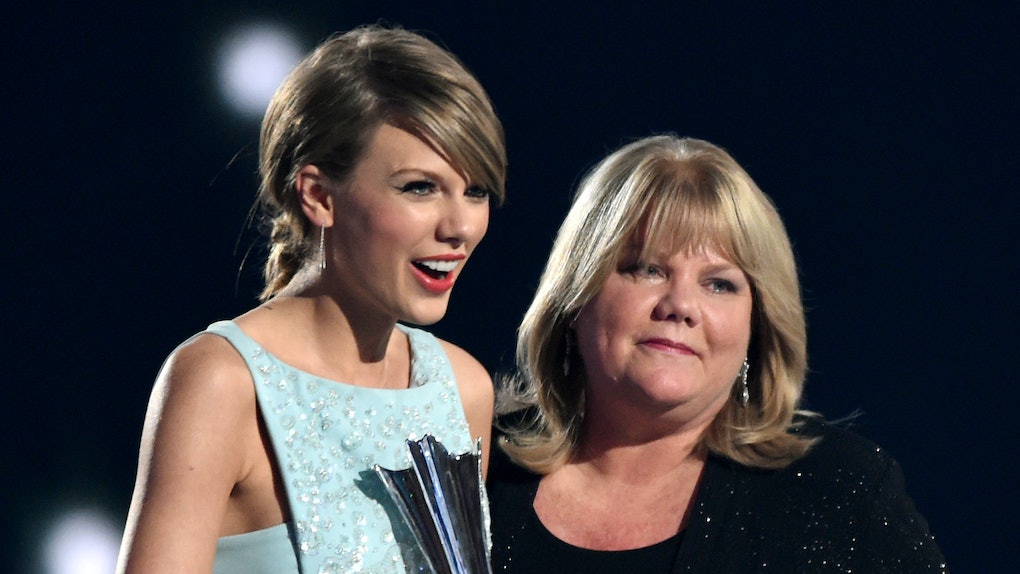 Taylor Swift's Comments About Her Mom's Cancer Returning Are So, So Real

Taylor Swift is turning 30 this year, you guys! THIRTY! So in honor of the milestone birthday, the cover girl for the April 2019 issue of Elle magazine decided to share with us 30 life lessons she's learned before turning the big three-oh. Thanks, Tay Tay! The list included everything from being nicer to her skin (she copped to using a Sharpie as eyeliner on occasion) to finding her political voice and schooling herself in how to make a bunch of different cocktails. But one of the more impactful lessons the pop star learned involved dealing with serious illness in her family, and Taylor Swift's comments about her mom's cancer returning are actually so, so powerful.

Swift revealed in the article that, sadly, her mom Andrea Swift‘s cancer has returned after she initially battled it back in 2015.

"Both of my parents have had cancer, and my mom is now fighting her battle with it again," Swift explained. "It’s taught me that there are real problems and then there’s everything else. My mom’s cancer is a real problem. I used to be so anxious about daily ups and downs. I give all of my worry, stress, and prayers to real problems now."

Dealing with a loved one suffering an illness is such a challenging experience and it's understandable that other issues in Taylor Swift's undoubtably already-challenging life pale in comparison.

Swift also opened up about one of her biggest fear in the piece, and it turns out it has to do with being able to keep her fans safe during live performances, in light of all the recent horrific tragedies.

"After the Manchester Arena bombing and the Vegas concert shooting, I was completely terrified to go on tour this time because I didn’t know how we were going to keep three million fans safe over seven months," she explained. "There was a tremendous amount of planning, expense, and effort put into keeping my fans safe. My fear of violence has continued into my personal life. Every day I try to remind myself of the good in the world, the love I’ve witnessed and the faith I have in humanity. We have to live bravely in order to truly feel alive, and that means not being ruled by our greatest fears."

Such a great outlook!

Swift also revealed to Elle that she's learned how to block out her haters and disarm petty bullying with laughter.

"In my experience, I’ve come to see that bullies want to be feared and taken seriously," she explained. "A few years ago, someone started an online hate campaign by calling me a snake on the internet. The fact that so many people jumped on board with it led me to feeling lower than I’ve ever felt in my life, but I can’t tell you how hard I had to keep from laughing every time my 63-foot inflatable cobra named Karyn appeared onstage in front of 60,000 screaming fans. It’s the Stadium Tour equivalent of responding to a troll’s hateful Instagram comment with 'lol.' It would be nice if we could get an apology from people who bully us, but maybe all I’ll ever get is the satisfaction of knowing I could survive it, and thrive in spite of it."

It definitely seems like Taylor's had to deal with more than most in her almost-30 years, and it's super-impressive that she seems to be able to find the learning opportunity in every sad and awkward situation life throws her way.

Keep doing you, Tay! You got this — and so does your mama!